August 17, 2009
The media went crazy when former Alaskan Governor Sarah Palin called end-of-life counseling provisions 'death boards' but then behold, the item has been reportedly removed from HR 3200. Then pro life advocates challenged federally funded abortions through vague language like 'health care procedures,' and oh, so surprisingly, liberals assured to the contrary and poof! Fed dollars won't touch an abortion. After weeks of virtual reality reports via YouTube at town halls during Congressional summer recess, and citizens being disparaged for being outraged, the President has shifted yet again to familiar territory  the damage control campaign trail  New Hampshire, to Colorado and then Arizona all in one week!

Barack Obama, the great communicator, is back no doubt spinning and answering simple questions with hundreds of colorful unrelated words. Is it working? Oddly, poll results are still dipping unfavorably when asked about his personal leadership as well as both House and Senate proposals. Has he lost his touch or is he just out of touch with the will of the public? Could it be the America people have found its messengers on YouTube? You know, those continually asking direct questions about HR 3200 specifics to wit the President eloquently doesn't answer? No one has quieted the other...yet.

The Commander-in-Chief of diversion knows he hasn't moved independents that shifted from his side of middle to conservative thinking. Clearly the mainstream media is doing all it can with it pitiful ratings against conservative cable but yet continues to hammer the likes of Glenn Beck for his daily mantra of a pending doom of Obamacare and a WH take-over of life in America. Meanwhile, it's not helping PR when the WH requests unsolicited emails (ignoring the Privacy Act of 1974) and in turn receives grief by those opposed to the President ideas receiving David Axelrod love letters in return. Never to be outdone, salvation has come! Obama Health Care Reform has been reborn (yet) again! Usher in Obama Health Care INSURANCE Reform!

Ah, so the White House was listening even while NBC, MSNBC, NBS, CBS, and ABC were chastising organizations, well dress town hall attendees, and talk radio for spreading lies and 'trying to hurt our President' as Congresswoman, Barbara Boxer (D) proclaimed disgustedly on television recently. Hmmm...The media is playing 'bad guy' and the President comes out looking like the 'good guy' in this public relations tug of war between citizens and government.

What was reported by mainstream affiliates? To its credit, the local Fox 5 story (Fox News affiliate), estimated the crowd reasonably, noted healthcare professionals, a panel format, and public policy experts on hand. The late night report gave citizens a chance to vent and showed various costumes and signs unfavorable to the President and his plan.

The NBC affiliate (WXIA Ch 11) also showed visuals about the event but that's all  they did not report the facts of the event. This is called minimizing an event intentionally 101:

1. The story gave credit mentioning two speakers of the more than 20, none of which were the actual organizers, and never mentioned the health care professionals' panel discussion of health care reform and HR3200.

2. The story never showed the entire crowd, just a sparse section at the back of the venue.

3) The story allowed two people to speak on behalf of the event, showing only their heads thus eliminating seeing those around them holding signs or in great numbers.

4) The story did not speak to any of the health care professionals, hosts, or organizers.

5) The story was read by the anchor which in broadcast terms is called a reader or translated not so important story.

Meanwhile cross town, the sequel to the YouTube-made-famous-exchange between GA Congressman David Scott (D), and a physician determined to know the cost of HR 3200, continued at a local high school. A few hundred fit one side of the gymnasium and as expected the doctor was there to get his answer. High dramas for YouTube lovers and the NBC affiliate otherwise why give this story considerably more air time than the DT event? The Centennial Park event had its own YouTube celebrity on hand, too. Remember, Marine Sgt. Paul Curtman who challenged Senator Claire McCaskill and Congress about the oath all of them had taken to defend the Constitution? He was there, but the cameras were with Congressman Scott and his YouTube physician nemesis. Former Texas Congressman Dick Armey, founder of Freedom Works and who fought Hillary Clinton's universal health care plan in the 90s was at Centennial Park, too.

Of course, the doc never got a straight answer from Congressman Scott as did another woman who read what she says was a copy of actual HR 3200, page number and all. But Scott was in friendly territory with those holding printed signs (all the same) in favor of Congress's health care reform. The Atlanta Health Care Town Hall is old news now. The debate continues before Congress reconvenes for its Fall session just days before 9/11 and the planned 9/12 March on D.C. We know it and the White House knows it; so be prepared for this to play out in the long run over YouTube and go to DVD by Christmas. 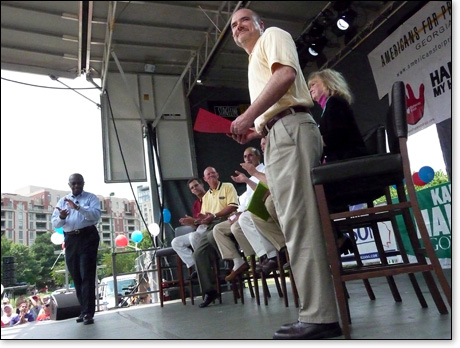 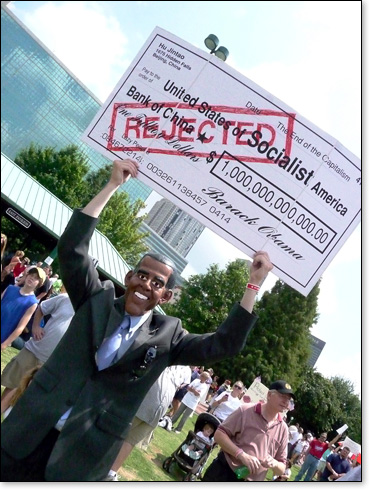 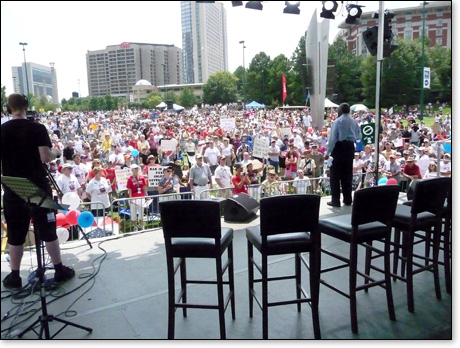