Stella Lohmann
The Constitution is 'primary,' vote patriots over popularity

July 14, 2010
No matter which candidate, in any race, the choice is clear  the Constitution is primary! Primary time should be one to celebrate the privilege as citizens to cast votes for those who swear an oath on the Bible (most times) to defend and protect the United States of America, the Constitution, and We the People from all enemies, foreign or domestic. Instead cases of voter intimidation or fraud loom in the headlines and voters strain to find candidates that will take their vow seriously, genuinely and with passion as public servants.

Frustrated and overwhelmed by the continual power grabs of government, candidates are increasingly being held accountable to not just profess conservative "grassroots" values but also demonstrate life-long conviction to defend, not apologize or compromise, traditions, values and faith. The standard that gauges credibility is the Constitution where the unique form of government unlike the world has ever known was born using the Holy Scriptures as outlined in the American Patriot's Bible, a side by side historical account of America and Scriptures.

American culture may have forgotten those foundations but some candidates have not, like Max Wood, an Iraqi Freedom veteran, former jag officer and U.S. Attorney appointed under the Bush Administration currently running for office as Georgia Attorney General. "I am not ashamed of my faith. I am an Evangelical Conservative Christian and believe that Washington has gotten away from our Judeo Christian values. That's why we're in the mess we're in."

REDSTATE 's story "Nice guys finishing" is about Colonel Max Wood and the kind of elected officials needed to take this country back. Taking an oath wanting to defend the Constitution is one thing. Wanting to stand by Her is another. But having the strength of heart to withstand an onslaught of attacks on freedom and the Constitution is the key. Will he or she be moved by self promotion, clicks, friendships, party line, or incredible ridicule and pressure that will most certainly follow a hard line defense of the Constitution? What 'stuff' are they made of?

Honoring God and Country is a way of life, not an election strategy. Vote the Constitution. 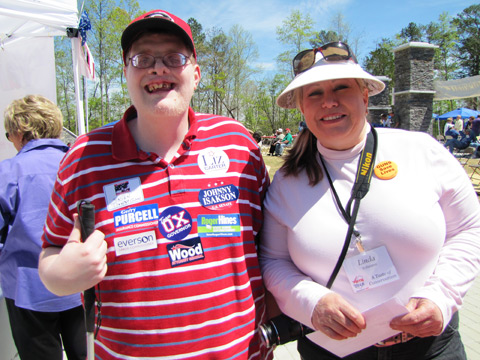