November 2, 2009
Representative Michelle Bachmann (R-MN) has mobilized a national Tea Party of her own with just one a few words with Sean Hannity on Fox News Friday night. Buses are being filled as we speak to join her on the steps of the nation's Capital on Thursday, November 5th at noon. Then Rep. Bachmann wants to walk the halls of Congressional offices with those who answer her call to stop the most recent healthcare reform bill set for a vote by next week. 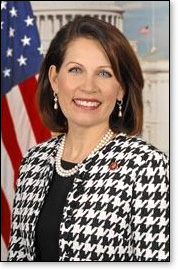 Tea Party activists in Atlanta are already hosting a One Year to Judgment Day Tea Party at the gold dome Capitol on November 2nd at the state Capitol to give notice that Americans are willing to use their voting power as never before to rid Congress of those who will compromise conservative values  fiscal responsibility, strict Constitutional adherence, and traditional values that have framed this republic since inception.

Many of those returning to Atlanta's Capitol for yet a third Tea Party there since February will be boarding buses organized by two Facebook friends, Harriet Carter and yours truly, who then contacted organizations to join forces. Not a unique idea but the result was a combined effort of forces between Resist.net, Tea Party Patriots, Freedom Works, 9/12 Project and Smart Girl Nation to fill as many buses as possible on short notice.

Rep. Bachmann's call gives Americans just five days to organize and to join her in D.C. for face to face meetings with her colleagues. Fox News show host, Glenn Beck, gave a six month notice for 9/12 Project organizers to drew 1.5 million that would march down Pennsylvania Avenue and rally at the Capital for hours the day after 9/11. As it stands now, organizers predict that there will be a least two or three buses or about 150 people leaving Atlanta on Wednesday for a ten hour trek to Washington. For some, it was just six weeks ago that they sacrificed money, time away from work, home, and loved ones to protest in D. C.

Harriet Carter of north Georgia is ready to join other activists on Wednesday calling the group Minutemen/women  those ready to respond on short notice to defend this nation. How many will answer Bachmann's request is uncertain but what is certainly remarkable is the resolve to which they have responded so quickly.