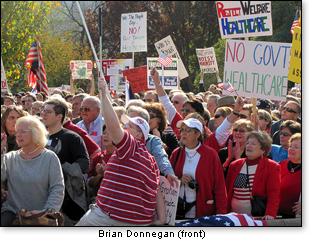 The late night vote follows days of protests outside the nation's Capitol by protestors of the estimated 1.2 trillion dollar health care reform bill and a slew of rallies, town hall meetings, and bus rides by Americans fearing that the Omnibus bill is actually a move toward socialism and loss of freedom overall. A call by Representative Michele Bachmann (R-MN) on Sean Hannity's television show drew tens of thousands to Washington and to the steps of the Capitol within six days.

Amazingly, many of the reported 1.5 million who had travelled from across the country to the 9/12 Protest March less than two months earlier were back ready to make a 'house call' on Congress members before they voted on a two thousand page health care reform bill this weekend. Georgians mobilized through word of mouth, Facebook, and the One Year to Judgment Day Atlanta Tea Party announcing details of buses being filled and possible opportunities of car pooling. Congressman Phil Gingrey offered to pay the way for Brian Donnegan, founder Can Do Conservatives of America after meeting him at the Monday night event at the state capitol. 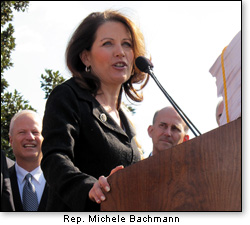 Donnegan is legally blind and wanted to join those departing for the Capitol to rally behind Bachmann's call to protest the bill:

"I sat on the right ledge of the Capitol behind the press corps. I did not have a sign with me but I held my cane up as if it were a sign many times. I am glad to have been there to be a voice for the disabled because we almost didn't have one on the stage on Thursday. Thanks to Chris Smith, who was the only speaker to mention the disabled and that will we be adversely affected by Pelosi's bill. I've come a long way in my fight but I still have a long way to go."

Dozens of Congress members joined their colleague from Wisconsin on the platform while key note speakers energized an already emotionally charged crowd. Academy award winning actor, John Voight, and bestselling author and talk radio host, Mark Levin challenged Americans to choose between tyranny or liberty much like coaches inspiring a football team before an anticipated rivalry. "See that building right there. You own that building!" (pointing to the Capitol building in the background). Not surprising that enthusiasm translated to the mass visitations inside and outside of the Capitol. 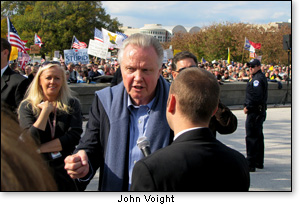 A 78 year old priest was carried from the doorway of Speaker of the House Nancy Pelosi's office days ago in protest of believed provisions concerning abortion.
The views expressed by RenewAmerica columnists are their own and do not necessarily reflect the position of RenewAmerica or its affiliates.