The Tea Party Express rolled into Atlanta, GA last night, just one week after The Tea Patriots held a rally at the state capitol, and just four days after the Tea Party called by Congresswoman Michele Bachmann at the nation's Capital. Amazingly a number of those in attendance at the evening event had been to them all! 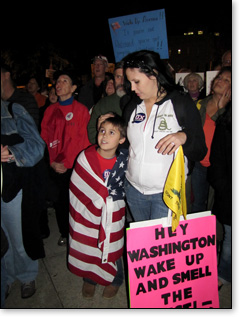 Sprinkled throughout the crowd were veterans from Afghanistan, Iraq as well as those serving in Desert Storm, Viet Nam, and Korea. "Our World War II veterans are America's finest generation. We honor all of you. To the Viet Nam veterans  I wish I had been there when you came home. I would not have been Hanoi Jane. It's been too long, but welcome, welcome home," said Deborah Johns, one of the Founders of the Tea Party Express.

Holding the American Patriot's Bible in one hand and the hand Diana Nagy in the other, Johns challenged Americans to vet candidates, stand strong and together in the tea party movement. The Tea Party Express managed to inspire the estimated five hundred faithful with music, dancing, and speakers in a campfire like roundabout setting. The statue marking the entrance to the Capitol was the make shift stage and portable lights and speakers made the rally up close and personal to those who came from all parts of Georgia and even neighboring states. 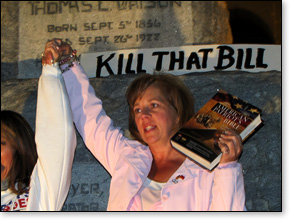 Local speakers filled in between the songs and updates about the TPE tours of cities that began in San Diego, California on October 25th travelling cross country eastward, building momentum as the tour reaches its final destination in Orlando, Florida on November 12th.

Performing "A Bailout Song," Lloyd Marcus,
The views expressed by RenewAmerica columnists are their own and do not necessarily reflect the position of RenewAmerica or its affiliates.