November 17, 2009
Patricia Sullivan is daring to go where many women would never have dared to go before Sarah Palin took center stage of the national political scene last year especially after the attacks the Palin experienced. But the 40 year old Floridian is determined to win 8th Congressional District office currently held by Democrat Alan Grayson. Palin may have inspired her but concern for her children's futures motivated her to leave her current position as a self described Domestic Engineer/Home School Teacher/Community Organizer with a PhD in 'Mom," quips Sullivan. 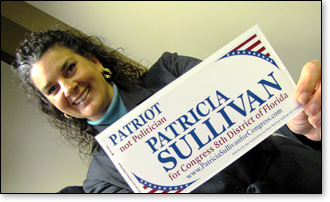 "The first thing I would like to do is repeal the "stimulus" spending bill and put all unused funds back in the Treasury. Clearly that was a tremendous failure," says Sullivan with a confidence.

'Sarah Palin really was a breath of fresh air. I remember the day she was announced as McCain's running mate. We stopped our book work to watch TV. Our oldest daughter, Jennifer, was immediately engaged in the election because of her. I remember watching Sarah walk through crowds with Piper holding her waist and now my youngest is doing the same while I'm talking with voters in my district."

Like Palin, Sullivan believes in having more than the average two children per household. "My husband and I have four children and have been married for 18 years. We've always home schooled which has given us the freedom to volunteer at all hours of the day, from nursing homes to boys and girls clubs. Two years ago I founded the Lake County 4-H Foundation which secures funding for our county 4-H program, enabling youth to attend leadership camps and participate in activities they otherwise couldn't afford. Serving together as a family not only blesses others, but we typically receive the greater blessing!"

What sacrifices and challenges have you endured in running for office and what how do you expect it to change you and your family's lives?

My family has already had to pick up the slack when it comes to preparing meals! Our oldest daughter now does the grocery shopping. Instead of spending evenings at home, we find ourselves out at speaking engagements, but because we usually go as a family, it has been fun. Home schooling will look a little different than it has in the past, but we adapt.

As a woman do you think that you will be scrutinized more strictly than male candidates?

I already have! One comment on an online article actually read "She's going to leave her kids and go to Washington? Nice family values!" Recently I visited DC for the "Health Care House Call" and was able to visit Representatives Ginny Brown-Waite and Michele Bachmann. These are both strong, vocal women and have been called names because of it. They're paving the way and both offered great advice. They will be incredible mentors for future congresswomen. I look forward to learning from their examples.

What is your advice to those who may have tinkered with the notion of running for office at any level at this time of their lives?

Run it by your closest friends. At first, I thought my friends would talk me out it, knowing the busy life I have and everything I am committed to already. I was truly shocked when they weren't caught off guard by the idea at all! I think they all saw it coming before I did. Of course as a family, we individually prayed about this decision and had several discussions about it. I wouldn't have moved forward if the entire family wasn't 100% on board. If you've got support, go for it! Our country needs you! I am a woman of deep faith. Everything I do is driven by it. I believe that is why serving is such a joy, because it is simply an expression of my faith "