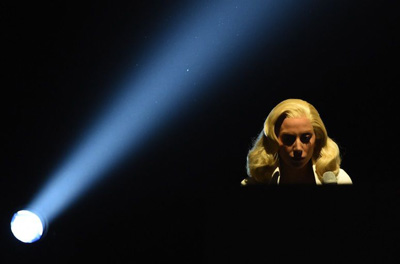 The 88th Annual Oscar's self congratulatory grandiloquence ceremony carried on as usual with the actors using it as a platform to push political issues including global warming, LGBT issues and especially racist charges of deliberate success-hindrance to all blacks. Indeed the entire 10 minutes of M.C. Chris Rock's opening monologue centered on whites' mistreatment of blacks.

Some of his lines were funny, but others were strained breast strokes in attempts at humor to make specific points, such as: "This year's in-memorandum presentation will feature blacks on their way to the movies being shot by (white) cops." Unfunny, crude and in bad taste, yet the robots in the audience dumbly 'laughed' and applauded which they felt necessary to do. This is part of Political Correctness doncha know?.

White people take the insults in stride, including this one where Rock stated that the reason blacks have not objected to past white Oscar Nominees (which is based on exceptional performance) was because "We were too busy being raped and lynched to care about who won best cinematographer."

Oscar nominations are based on superior acting skills...not just good acting but SUPERIOR acting. It took Leonardo DiCaprio 22 years and four tries to finally win an Oscar even though he was a very competent actor, but was not SUPERB, up until this film. One does not receive an Oscar just for being in a film.

It is to be noted that the ceremony this year was the least watched in 8 years. The public has had its fill of Staritis aggrandizement.

And that is how it went until Lady Gaga was introduced. The singer who began her career as a creature of curiosity, later evolved into a first-class singer. Her rendition of our National Anthem at this year's Super Bowl ranked among the very best along with Whitney Houston.

She was introduced by Vice President Joe Biden, not by video, but in person on the stage. She sang about an issue close to Mr. Biden's heart, that of sexual abuse. His introduction of her was right on target. "We must change the culture," he said. "We must and we can change the culture so that no abused woman or man, like the survivors you will see here tonight, ever feel that they have to ask themselves, 'What did I do?' They did nothing wrong."

Lady Gaga took the stage to sing a song she helped compose, Til It Happens to You. Several name actors and actresses in the audience broke down crying as well as many TV watchers around the world. Millions of people of all ages have been set upon by these perverts who cannot control their lusts and who cannot be trusted to be alone with anybody, male or female.

They cannot be cured because they cannot control themselves. This affects victims for the rest of their lives, something they never get over. Many become promiscuous, others frigid, while a majority takes to alcohol and drugs. All future relationships they may have are affected and damaged. One thing for sure, relationships established in later life by victims seldom last.

Some who have been violently sexualized by a scoutmaster develop a hatred for anyone in authority or anyone in a uniform. Many are left with physical injuries including a torn rectum which leaves them in constant pain. Lady Gaga, it turns out, was sexually abused as a child.

For her to address this severe societal problem in such a dramatic forceful way was very much needed, and hopefully will result in much tougher laws being enforced against sexual predators.

Imagine how it affects someone struggling with the after-effects of being sexualized by a scoutmaster to see how insane political correctness not only allows but encourages "gays" to become scoutmasters with insistence that the public accept this perversion. Gay Pride days also stab the hearts of those who have been forcibly sodomized as children by homosexuals. To see such conduct encouraged, rather than condemned, stretches the imagination to the breaking point.

Surrounded by victims, male and females who have been violently sexualized by out of control maniacs, with messages scrawled on their arms, such as, "Not Your Fault," Not to blame," "It happened to me," Lady Gaga sang a powerful song that strongly resonated.

Vice President Joe Biden is to be commended for the stand he has taken against one of society's' greatest problems and especially Lady Gaga for bringing the issue front and center during a hugely watched major TV program. This was a valuable contribution.