Some Mexicans repaired the neighbor’s roof. I asked their boss how he liked the US. He replied it was great for making money, but as you rushed from job to job, it was stressful. Was he going to stay? “I’m earning good money,” he said, “and in 10 years I’ll go back to Mexico. I’m going to save and retire at 50 where I and my family can siesta and live well.” A few days later, the Wall Street Journal published “Escaping the efficiency trap and finding some peace of mind” (8/7/21). It reminded the ‘hard-working, always on call’ that there is more to life than serving capitalism, but most of its pages continued to push ‘hard work = the joys of consumption.’

Thus, there are at least two ways to approach work: hard-charging, rule following, that reaps a larger house, new cars, etc. v a more ‘relaxed’ way that skips some rules to retain more personal time. A decent case can be made for either. With all the talk of ‘equity,’ have the sexes, races and homosexuals acted in ways that might account for why they are treated differently? The Mexican boss was willing to trade ‘money’ for ‘more time.’ When he stopped working, should he still get as much money? If he didn’t, would he be ‘gipped,’ the victim of discrimination, or ‘getting what he deserved: no work, no money?’ There are loud advocates for each position.

Some say that ‘fairness’ requires an equal amount to each citizen every month – irrespective of what they do with their time. Gravitating toward this ‘socialist-like ideal,’ part of our society is ‘socialized;’ thus, recipients get about the same Social Security, unemployment, or welfare irrespective of how hard they worked. But income – a large part of current social rewards – is usually a function of being a good ‘cog’ in our capitalist machine. The 1996 National Household Survey of Drug Abuse asked a clever question indexing commitment to work. Those employed (of 12,381 non-institutionalized, aged 18-59) were asked if they had ‘missed work in the last 30 days due to illness or because they did not want to work.’ An equal number of respondents in each of the 12 months of the survey was interviewed. Thus, a respondent reported only about his last 30 days revealing little of his work ethic. But added together over the year, we get Table 1’s first row (the CDC hasn’t been forthcoming with its more recent data on this issue).

If you are going to fit into capitalism and be maximally rewarded, you need to ‘be at work, on time.’ Across Table 1, men were more apt to ‘be at work’ than women [though not shown, overall, white, married men were the most apt to show up for work, and Black lesbians missed it the most (there were no Latino or Asian categories)]. Those who engaged in homosexuality were the least apt to show up (e.g., as per the top line of Table 1; 34% v 19% for non-homosexuals). Although not shown, drug users were not statistically different from homosexuals, with 32% missing work. Still, most in every category claimed to ‘report for duty’ most of the time. 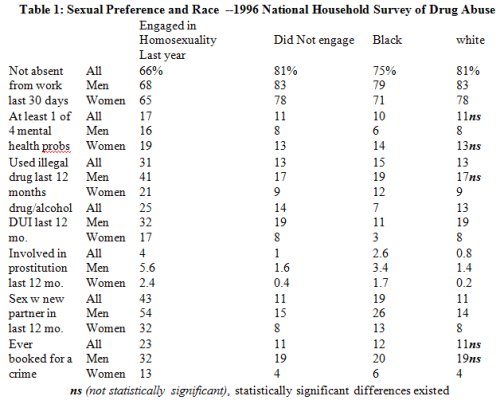 At least as indexed by degree of missing work, the sexes, the sexual orientations, and the two races indexed here were not quite ‘the same.’ Yet are they ‘close enough’ to be considered ‘equal?’ One way to decide would be to see how frequently this ‘missed work’ question ‘predicted’ or correlated with other important negative outcomes.

Consider ‘mental health’ or happiness or not stressed/depressed (as indexed by anxiety, panic attacks, agoraphobia or depression). Although ‘mental health experts’ had a great deal to do with ‘normalizing’ homosexuality, those who engaged in homosexuality were most apt to score as disturbed. More women in each category scored as disturbed, while Blacks tended to score better than whites. How important is mental health? It does not necessarily affect others’ lives, but if women are equal to men and gays to normals, it would be nice to account for these differences.

Using illegal drugs or driving under their or alcohol’s influence impacts everyone. Overall, there was a strong correlation between reporting using mind-altering substances and saying you drove under their influence. While an absolute figure as to the proportion of traffic accidents involving being substance-impaired cannot be assured, scanning the CDC website makes it appear that around a third of fatal traffic accidents involved alcohol while drugs swelled this proportion somewhat. Since those who drink are also more apt to use drugs, apportioning how many accidents (or even deaths) are due to alcohol v drugs is neigh impossible. Because our society is filled with dangerous machines requiring rapt attention lest they injure, it seems likely that around 40% of all serious accidents involve impairment due to substance abuse. Quite apart from the many deaths from overdose or drunkenness, being less than quite attentive to your task reduces everyone’s security.

Notice that those who engaged in homosexuality scored worst on every variable in Table 1. This is not to say that there weren’t members of every category who engaged in the same things – gays just did them with greater frequency. There were other social issues addressed than shown in this small Table. But, essentially without exception, homosexuals scored worse (usually worst and/or tied with illegal drug abusers) than normals. Homosexuals’ scores on these behaviors impact well beyond the individual and help disorganize society. Driving under the influence or having been booked for a crime could involve possible death or injury for those sharing the road or economic loss or physical harm from those victimized by criminality. Whatever it covers, does ‘equity’ require these harms and poorer work habits be ignored in favor of ‘full sexual satisfaction?’

In the aggregate, from a ‘what is good for society’ standpoint, the scores in Table 1 solidly favored non-homosexuals (and as near as FRI can determine, continue to favor non-homosexuals in study after study, year after year). Why Western societies have come to treat homosexuality as equivalent to heterosexuality in benefits (as marriage), are engaged in teaching their school children that both are to be equally esteemed, or are increasingly making opposition to LGBTism a crime, is obscure. Black v white scores, on the other hand, were somewhat mixed. Whites were more apt to turn up regularly at work, but considerably more apt to admit endangering others by driving under the influence.

While it might be argued that new sexual partners are fun, or that prostitution is a ‘victimless crime’ since exchanging money for sex tends to be a voluntary activity (and billions have so testified by their actions), both are associated with cheapening of the meaning of sex for the individual and society. Our children come from sex, and their responsible rearing almost always involves their being protected by marriage until they are emancipated. Neither new partners nor prostitution, either bought or sold, usually helps to cement marriage. Indeed, with rare exception, both are disruptors.

According to Dr. Paul Kengor, Karl Marx’s favorite slogan was: “Everything that exists deserves to perish.” If you agree with Marx, the issues addressed in Table 1 are going swimmingly. But if you care about the future for society’s children and grandchildren, helping to make such a slogan come true, is a sad ending for any civilization.

Caution: question self-report. A June 2021 CDC ‘objective’ measure [e.g., not based on self-report but on US hospital Emergency Department visits for motor vehicle crashes reported in the US from 2017-2018] has to shake your confidence in self-report.