Kiev has an LGBT pride parade and gay rights, Moscow has neither. Patriarch Kirill, head of the Russian Orthodox Church said: “In order to enter the club of [Western] countries, it is necessary to hold a gay pride parade,” declaring the war ‘holy.’ “We will never put up with those who destroy [God’s] law, blurring the line between holiness and sin, and even more so with those who promote sin as…the model of human behavior.” (3/6) Homosexuality seems of concern to Putin as well:

At a conversation at the Hilton Hotel in Brisbane, Australia, during a G-20 summit in late 2014, Ms. Merkel realized that Mr. Putin had entered a state of mind that would never allow for reconciliation with the West,… [The] conversation was about Ukraine, but Mr. Putin launched into a tirade against the decadence of democracies, whose decay of values, he said, was exemplified by the spread of “gay culture.” The Russian warned Ms. Merkel earnestly that gay culture was corrupting Germany’s youth. Russia’s values were superior and diametrically opposed to Western decadence ... (Wall Street Journal 4/2)

Merkel’s “a state of mind that would never allow for reconciliation with the West” suggests leaders must embrace LBGTism! How much does Zelensky’s apparent "gay dance" & piano playing with his penis [see YouTube] assure he has a "decent value system?" How much does Ukraine’s gay rights contribute to the West’s decision that it’s worth defending?

Putin’s argument is not without merit: democracies have devolved into focusing on citizen’s feelings, especially that sex "is your choice." The West now follows the woke philosophy that since "all are equal," and LGBTs enjoy homosexuality, "human rights" require universal validation of their sexual fancies as being "just as good" as heterosexuality.

I contend that: 1) homosexuality is more easily adopted than heterosexuality; so, 2) if kids come to believe either is "just as good," more will become LGBTs; and 3) severe health and demographic consequences for both the individual and society will follow. The latest research, by the Centers for Disease Control and Gallup, validate my first two predictions: U.S. youth are turning LGBT (Table 1). Has the West joined a parade marching toward too few children to sustain itself? 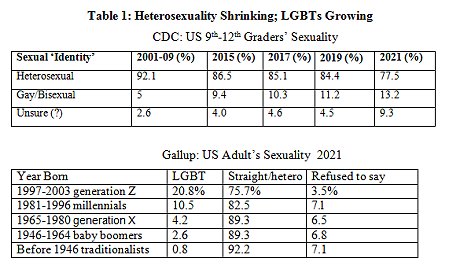 Since heterosexuality is shrinking, might LGBTs make up for the children heterosexuals won’t be having? In 2019, the U.S. Census Bureau said 1.6% of U.S. couples (e.g., about 2 million LBGTs) were homosexual and raising about 300,000 (0.6%) of the 51.7 million couple-raised kids – so the homosexual couples weren’t punching their weight in child-production. But LGBTs are also living alone and married to opposite-sex partners – the Census didn’t release counts of their kids. But it did say that 18% of same-sex couples had kids (55% with one child) as compared to 40% of opposite sex couples who had kids (39% with one child). The Census didn’t calculate the LGBT fertility rate, but LGBTs were much less apt to be parents and had fewer kids if they were.

Table 1 suggests that, with the shrinkage of heterosexuals, the U.S. is on track to eventually crash for lack of children (and the EU, at ~0.75/person fertility suggests the same). To be sure, collapse is still years away – South Korea is still functioning with a fertility rate of around 0.5/person. But it knows it’s in trouble – no society can continue if it doesn’t generate enough children.

As can be seen in Table 1, ever more U.S. children are losing their sexual moorings and becoming "unsure" of what they "are." Further, in a twist not even hinted at in the Genesis account of the organized homosexuality of Sodom, with the invention of trans, children’s sense of gender is being rattled. Currently, 2-4% of high schoolers are switching or contemplating the switching their sex. And large numbers of professionals make their living mutilating children “because kids need it!”

Moses, in his most extensive discourse (Deut. 32), called the organized homosexuality of Sodom central to the "way of death" (as opposed to the "way of life" promised if God’s rules were followed). His analysis is echoed by New Testament authors. David exterminated entire villages, including children, by contemporary standards, thereby becoming a war criminal. Still both Jews and Christians revere him as following God’s will. Christians have appealed to "the faith" to go to war, as the Battle of Vienna (1683) ending the Muslim threat to Europe.

Putin has made his interest in controlling Ukraine abundantly clear for some time. Aware of the rapid transformation of the West’s youth, especially youth in the U.S. (Table 1), might Putin have decided that he couldn’t wait until Ukraine – filled with "his Russo-Slavic people" – slowly accepted homosexuality and similarly started to implode? That taking lives now would "save" Ukraine from the slow demographic death suggested by Table 1?

It is always difficult to know when a politician is sincere – they often say what their audience wants to hear. Yet Putin made himself an outsider at the G-20 meeting by criticizing Western support of homosexuality – the opposite of what other rulers of the world wanted to hear. He has joined Patriarch Kirill “in casting the fight as a religious drama, an existential battle of good and evil, a clash between Russo-Slavic tradition, values and unity and the corrupting foreign influences festering at Russia’s border” and endorsed Kirill’s March 6th declaration that: “We have entered into a struggle that has not a physical, but a metaphysical significance” (Washington Post 4/19)

LGBTs are rapidly growing in numbers and political power in the U.S. and throughout the West. Gay rights is slowly expanding in Ukraine. Russia remains the only large European country blocking acceptance of gay rights. There appears to be a religious component to the war in Ukraine. Gay rights is most assuredly not the cause of the war – Putin’s desire to rule an empire is clearly the main motive. But that it even registers among the 20 or so top motives, shows how far gay rights has come.