November 17, 2015
Last Friday afternoon, when I planned my writing schedule for this week, I decided on a nice, light article for today detailing the fun adventures Charles and I would have over the weekend. But then on Friday evening we turned on the news and learned about the horrific events in Paris. And the new recipe we planned on experimenting with and the Spectre movie we planned to see didn't seem important enough to write about. 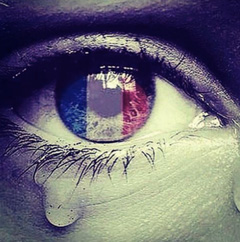 So let me begin by stating that my husband Charles and I are saddened by the dreadful terrorist attacks in Paris. Our deep condolences are extended to the family members and loved ones of those who died, and our sympathy is with the entire nation of France.

Many people, including the highest level politicians, in their scripted comments of condolences stated that they were "shocked." But it would be dishonest for me to state the same, because as horrendous as these terrorist attacks were they weren't entirely "shocking" or unexpected. That wolf has been growling at our door for a long time now.

In a similar vein, I also extend my sympathies to the decent, studious American college students whose lives have been disrupted by the chaos on their campuses through riots, protests, walk-outs, professor firings, administrator intimidation, and the like.

Of course, the loss of an education cannot be compared to the severity of the loss of life. But there is a similarity between the horrifying terrorist attacks and the protests on university campuses. Because whether the situation involves a college or a country, aberrant behavior, left unchecked, will never decrease on its own.

A code of consequences has been broken for a long time in Western culture. And when punishment is not an option, there is no perimeter to reign in those people who would do harm to others.

This is basic human developmental psychology. When a parent sets boundaries that a child disobeys, the parent has three options.

One, the parent can ignore the child and hope he/she will grow out of it. But this complete lack of consequence will not encourage the child to change their behavior.

Two, the parent can appease the child and offer it rewards and praises. But this positive reinforcement will only serve to motivate the child to misbehave even more.

Third, the parent can punish the child, using a mixture of love and strength and authority.

The first two options will fail. It is only the third, administered consistently, that will be successful.

The adults have given their authority away a long time ago. The West has been faced with college protests andinternational terrorism since the 1970's.

In all the decades since, with few exceptions and within short time frames, the tactics of ignoring the problem has led us to the current crises where the wolf has clawed through most of the front door, and with one more leap it shall be upon us, as the Western world stands huddled in a corner confused about how the beast managed to get so large and close.

A first step would be to stop appeasing counterfeit victims, beginning with the college crybabies. We've been so consumed with the radical sensitivity to micro-aggressions, that we've been ignoring actual terrorist aggression.

It's time for the adults to step into the room, and concern themselves not with the words that could offend someone, but with the enemy armies that could oppress everyone.

Kristia Cavere Markarian and her husband, Charles, are committed Christians. Her background is in finance, national security, and education. Everyone is welcome to connect with Kristia through Twitter and Facebook. On her website, she writes every weekday about faith & values, marriage & relationships, child-rearing, etiquette, current events, and all of life's joys: www.ChristianHousewifeOfNewJersey.com.

January 6, 2016
Reader challenge of the week: coarseness and cultural despair

July 2, 2011
My meeting with Obama, and a lesson for Republicans

January 25, 2011
Blood money: the economics of the abortion industry

January 2, 2011
A conservative celebration in the Capitol