To say we are living in troubling times is a huge understatement! As a baby boomer, I can attest to the fact that this is NOT the America in which I grew up. America is different because Americans changed, and not for the better. Today our citizens are so deceived that we now call evil good and good evil. (Is. 5:20)

We could spend a lot of time reviewing various causes of our current situation, which I have been writing about for two decades, and you, my readers, already know about. Instead, while we may briefly touch on categories, it is now more important to get to the root cause of our accepting/allowing evil to be the dominant force over our nation. Simply put, we have abandoned God.

Let us again look at the Tytler diagram. Spiritual faith is the first step in escaping bondage. We must have faith that it can be done, and that God can help us if we cry out to and depend upon Him. For without faith, there is no hope except to do things with sheer will. Scripture says, Now faith is confidence in what we hope for and assurance about what we do not see. (Heb. 11:1 NIV)

When the forces we battle have overwhelming, seemingly absolute power over us, sheer will is inadequate. We must gather the necessary courage to stand and fight for the liberty we so desire, which also comes through our God who gives liberty to the oppressed (Luke 4:18). 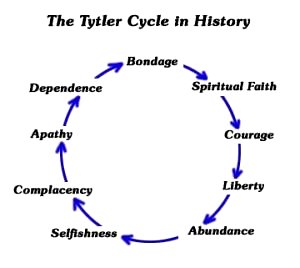 We Americans began gathering abundance but forgot to give thanks to the One who made it possible. Then we got selfish and greedy, and began thinking we were smarter than God, and in need of no help from anyone. We became haughty and prideful.

Simultaneously, being wise in our own eyes, we abdicated our responsibilities of overseeing those in government we supposedly chose to represent us. (Complacency and apathy.) We decided that so long as we have happy lives/freedoms, there is no need to get involved with such matters. Let someone else do it became the new mantra. And now, as I have said before, we have increasingly become a people who depend upon Big Daddy government to care for us from cradle to grave.

Yes, there are still people who believe in personal responsibility. Sadly though, growing numbers of people believe the government should be our provider, with even a basic income for everyone, including illegal aliens. We are becoming a nation of fat, lazy, deadbeats. (Dependency.) And the responsible ones who work and pay taxes must carry the whole load.

What happens when the majority are on welfare? We are so close to that mark.

The Bible is replete with examples of how Gods children, being wise in their own eyes, repeatedly rejected His guidance and did their own thing. Not surprisingly, they ended up in captivity. Is America headed in the same direction?

Currently, we are in bondage to the cultural Marxists we allowed to invade our major institutions, most notably colleges/universities. Sound, biblical reasoning and common sense have given way to political correctness and secular humanism. Our federal government that is supposed to serve citizens, securing our Blessings of Liberty now dictates to us, micromanages almost every area of our lives, and is attempting to take away any of our rights to petition government over grievances.

Why else are there currently about 6,000 National Guard troops guarding government buildings in Washington, D.C.? What/who are the so-called leaders afraid ofWe the People? Surely it is not foreign enemies. China, Russia, maybe even Iran can just launch a nuke and destroy our capitol if they so choose. The remaining troops, down from about 26,000 in January, could not stop a nuke, but they can stop ordinary citizens.

Meanwhile, BLM and Antifa can riot and destroy entire cities if they so choose, but American citizens in general cannot go to D.C. and assemble or march against our tyrannical government.

We can make all sorts of excuses for our deterioration and decline as a nation, but sadly, we are responsible because we either rejected God, or allowed Him to be gradually removed from His high place of importance.

In the Book of Romans, we are told exactly what has happened, and is currently happening in America, and Gods response to it:

[18] The wrath of God is being revealed from heaven against all the godlessness and wickedness of people, who suppress the truth by their wickedness, [19] since what may be known about God is plain to them, because God has made it plain to them. [20] For since the creation of the world Gods invisible qualitieshis eternal power and divine naturehave been clearly seen, being understood from what has been made, so that people are without excuse.

[21] For although they knew God, they neither glorified him as God nor gave thanks to him, but their thinking became futile and their foolish hearts were darkened. [22] Although they claimed to be wise, they became fools [23] and exchanged the glory of the immortal God for images made to look like a mortal human being and birds and animals and reptiles.

[24] Therefore God gave them over in the sinful desires of their hearts to sexual impurity for the degrading of their bodies with one another. [25] They exchanged the truth about God for a lie, and worshiped and served created things rather than the Creatorwho is forever praised. Amen.

[26] Because of this, God gave them over to shameful lusts. Even their women exchanged natural sexual relations for unnatural ones. [27] In the same way the men also abandoned natural relations with women and were inflamed with lust for one another. Men committed shameful acts with other men, and received in themselves the due penalty for their error.

The next part is a staggeringly accurate description of todays American society that so much of the population, including those within the so-called Church, are so puzzled about:

[28]Furthermore, just as they did not think it worthwhile to retain the knowledge of God, so God gave them over to a depraved mind, so that they do what ought not to be done. [29] They have become filled with every kind of wickedness, evil, greed and depravity. They are full of envy, murder, strife, deceit, and malice. They are gossips, [30] slanderers, God-haters, insolent, arrogant and boastful; they invent ways of doing evil; they disobey their parents; [31] they have no understanding, no fidelity, no love, no mercy. [32] Although they know Gods righteous decree that those who do such things deserve death, they not only continue to do these very things but also approve of those who practice them (emphasis mine). (Rom. 1:18-32 NIV)

So, not only have multitudes rejected God and made new gods/idols for themselves, even created new forms of evil/sin, scores of those who still at least minimally believe in God now either practice the idolatry and sins of the God rejectors, or at least give approval of these sins. And all the sins and denial of God are based in self-will and rebellion. Then in chapter two of Romans we are told that approving, or applauding sin, rather than regretting said sins, is itself a sin.

When those of us who still have a God-based foundation observe what appears to be the mental breakdown, or insanity of our nation, our conclusions are pretty accurate. Sinners who have suppressed truth progress to futile thinking, then darkened and foolish hearts, and finally, depraved minds. The Bible repeatedly says that God gave them over. In essence, He abandons sinners to their sins.

When you hear all the perversions being applauded by not just those who practice them, but by our nations so-called leaders, does any of it sound sane or rational? Things most of us were taught as being wrong by almost every societal measurement are now called right. Common sense tells us that if something was considered wrong 1000 or 100 years ago, it is STILL wrong. Just because someone today feels something should be different does not change simple truth. Absolute truths remain. Right is still right; wrong is still wrong. End of discussion.

So, when will we remember Truth, and fight for it?

There is another scripture passage worthy of consideration. It reads: Woe to those who draw sin along with cords of deceit, and wickedness as with cart ropesWoe to those who call evil good and good evil, who put darkness for light and light for darkness, who put bitter for sweet and sweet for bitter. Woe to those who are wise in their own eyes, and clever in their own sightwho acquit the guilty for a bribe, but deny justice to the innocent. (Is. 5:18-23 NIV)

To all this we are told Gods anger burns against us.

Yes, God is a loving God who created each one of us. However, He is also a just God. If He judged His beloved Israelites, He will indeed judge Americans.

Is it not time for us to stop agreeing with the world, and even our so-called leaders who call evil good and good evil? We know the truth, because within each one of us is a portion of the Holy Spirit, sometimes called the conscience, that divides truth from error, right from wrong. Even little children have this remarkable gift.

The solution? God says, If my people, who are called by my Name, will humble themselves, pray, seek my face, and turn from their wicked ways, I will hear from heaven, will forgive them, and heal their land. (2 Chron. 7:14)

Of course, dear reader, if you have never met God through His Son, Jesus Christ, you can simply pray, admitting that you have sinned against God, and that you truly wish to change; ask for forgiveness for all these sins; and ask Jesus to be your Lord and Savior, and to teach you how to walk in His ways. It will be the most important decision of your life. Please do not wait too long to decide. Seek the Lord while He may be found. (Is. 55:6) To anyone willing to hear.