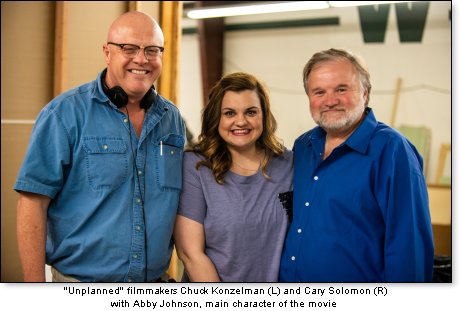 Los Angeles – The movie "Unplanned" is about how brutal truth helped Abby Johnson to choose beautiful truth and redemption. Ten years ago, Johnson left her job as the director of Planned Parenthood's facility in Bryan, Texas, where 22,000 babies were aborted while she worked there. Since then, she has exposed the abortion industry and the facility went out of business.

Johnson and the movie makers told me why they made the feature film. "I think it shows the value of praying for and reaching out to abortion clinic workers and really showing their humanity," said Johnson. "I hope this film will continue to emphasize that in the hearts of people. No one is too far gone to receive God's mercy. Conversion is possible for anyone."

The movie comes from Johnson's 2010 book "unPlanned: The dramatic true story of a former Planned Parenthood leader's eye-opening journey across the life line." Johnson's change of mind and heart began as she assisted in an abortion and watched it on a sonogram.

"It was clear to me that I wasn't watching a simple choice. It was very gruesome, the taking of a life," said Johnson. "I saw the baby's body being twisted and burned. As I said in the book, the baby was wrung like a dish cloth and its body just kind of crumbled into the tube. It was terrible to watch."

Why see the movie?

Is "Unplanned" a good movie worth your time and money? Yes.

The Motion Picture Association of America rated "Unplanned" R, which dictates that theaters shouldn't admit persons under the age of 17 without a parent or adult guardian.

Some scenes are shockingly heartbreaking and all of them are necessary. Johnson, the filmmakers, and the distributors have pointed to the irony that underage girls can get abortion drugs or surgical abortions but they're banned from the seeing the warnings in "Unplanned." Nevertheless, they acknowledge the R rating as fair because it shows abortion is violent and takes human lives.

The filmmakers were stunned

Hollywood filmmakers Cary Solomon and Chuck Konzelman worked on many mainstream, big-studio movies, but became famous for their feature films "God's Not Dead," starring Kevin Sorbo, and "God's Not Dead 2," made in 2014 and 2016, respectively. However, they said the Holy Spirit told them to make "Unplanned" in 2012.

"We've actually had quite a few occurrences like that, but it started with us at a Starbucks," Solomon explained. "We were just sitting outside having coffee and a girl came up to us and handed us the book 'unPlanned' and said 'You should make this a movie.' At first we were like, 'I don't think so.' After we read the book, we were so compelled, we prayed on it and the funny thing was, when we prayed on it, we could just feel the Spirit on it – that the Lord wanted this to happen. When we prayed on it, I heard: 'Not yet' and I'm thinking to myself, 'Why are we going through all this if it's not yet?'And so we kind of got bummed for a week and all of sudden the Spirit fell on us and I felt and heard the Lord say: 'Not yet doesn't mean no. It means not yet.'

"So that was stunning to us," Solomon continued. "We figured that would happen in a month or two months and all of sudden four years had gone by and we're in our office, and the Spirit drops on us, and says 'Now' and we knew exactly what He was talking about. That was 10 days before President Trump – to the surprise of the world – was going to be elected. What we came to realize at that very moment was the wisdom of God because, if we had done it six years ago, it would have been during the Obama administration with people who were not as sympathetic as Trump is to ending abortion. We saw the wisdom of this after Trump got elected."

Solomon referred to some states pushing infanticide and said: "We realized, especially now if you look in the news, what's happening now in New York and Virginia and all these things, it's in the Lord's perfect timing. And all along the way as well. We've had the Lord telling us, 'We're going to do this.' This is going to happen, that's going to happen, do this, do that. So He's been our shepherd. We are sheep following the Shepherd. That's the best way I can say it."

Solomon and Konzelman don't shrink away from personal responsibility in politics and law. They realize that voters, lawmakers, judges, governors, and the president all have the duty to secure human rights. As Chuck Konzelman summed it up: "Right. I don't think Jesus gave us permission to divorce our daily actions from our faith. I read the Gospel and never saw that anywhere."

They said Abby Johnson credits so many men and women in her book that they couldn't include everyone "because the movie would be nine hours long."

Ashley Bratcher plays Abby Johnson in "Unplanned." The movie introduces Johnson while she's the single student named Abby Brannam at Texas A&M University, and that's where the conflict between her faith and reason began. While she was single, Abby secretly had a surgical abortion. She started her abortion career as a volunteer escort at Planned Parenthood, and had the chemical abortion after her first husband cheated on her. Abby didn't ponder God's will, but she was terrified of disappointing her parents, Kathleen and Mike Brannam.

What was Johnson's mindset at the time? She said: "Honestly, the first abortion I had was really to not disappoint my parents. The second abortion I had – the RU-486 – was truly because I did not want to have any connection to my ex-husband and so I just thought this is the only way to make that happen."

The chemical abortion was so violent that Abby thought she was dying and said a prayer of sorts that her mother wouldn't find her dead. "I thought because I was already involved as a Planned Parenthood volunteer, it was a pretty easy decision for me to make," said Johnson. "I didn't know much about the medication abortion procedure itself, but I remembered everything I heard and I thought 'Oh, this is so natural, and it's so easy and it's like a heavy period, and it will be like nothing and you'll be back to normal in no time.'"

Abortion is a high-profit business for Planned Parenthood. When Johnson worked there, the price of surgical abortions ranged from $450 to over $800, depending on how far along the babies had developed in their mothers' wombs. Chemical "medication" abortions didn't require paying an abortionist and they were priced at $450.

"When I went to college I fell away from my faith," Johnson explained. "I went to church periodically but I can't say I had a relationship with God. I thought of it as something that I ought to do. I ought to go to church and my parents were always asking me 'Are you going to church?' And so I wanted to be able to tell them 'Yes. I went to church last Sunday.' But I wasn't walking with the Lord at all. So I can't say that there was ever a time – it's strange to think about, actually – but I can't say there was ever really a time where I thought 'What would God think about me having an abortion?' That never even crossed my mind. It's the complete disappointment that I thought my parents would feel and the embarrassment that they would feel. Which, of course now, I know that it was completely blown out of proportion, but at the time I thought 'I cannot disappoint them. They cannot find this out. '"

In some ways, Johnson's conversion to the Catholic religion is similar to the conversion of the late Dr. Bernard Nathanson. He was an abortionist and a co-founder of the National Abortion Rights Action League, known as NARAL, and he shaped the successful "pro-choice" narrative. Hollywood filmmaker Nick Loeb and Alveda King plan to release their star-studded "Roe v. Wade: The Movie" later this year and it's partially based on Nathanson's memoir.

"What I hear a lot from pro-lifers is 'We never thought of praying for [abortion] clinic workers, '" said Johnson. "'We never thought of reaching out to them' and I hope this [movie] will get people thinking about how they can reach out to abortion workers and do it in kindness and charity."

Johnson's book and the movie end with her conversion to a pro-life warrior, yet she and her husband Doug (played by Brooks Ryan) joined the Catholic Church on Easter 2012.

"Honestly," said Johnson, "I left the clinic and I had to make all new friends because none of my friends from Planned Parenthood were my friends anymore. And so I befriended a lot of people who were working in the pro-life movement and the majority of my newfound friends were Catholic. My husband and I had been going to an Episcopal church, which very openly supported abortion and supported my work with Planned Parenthood. So I knew that when I left the clinic I would also have to leave the church, but then what happened was the priest actually called us in and told us we were no longer welcome in the Episcopal Church because we were publicly pro-life. ...

"So we were going to different churches and nothing really felt right and all of our new friends were going to Mass," continued Johnson. "My husband and I both grew-up with quite a bit of anti-Catholic sentiments and we weren't interested in becoming Catholic. Then we decided let's go, we'll go to Mass, we'll say that we hated it and then they'll stop bothering us. So we went and we both really walked away surprised and saying 'Okay. That felt right. That was weird because we expected to hate it but we actually really loved it and we feel very drawn to learn more.' We ended up enrolling in RCIA [the Rite of Christian Initiation of Adults] and the more we looked into the faith, the more we learned about the Catholic Church, the more we looked into history, we knew that was the place we wanted to be." This was magnificent because the Johnsons brought their children into the Church as well.

Johnson's personal conversion inspired her to save babies by rescuing abortion workers from the death trade. Therefore, she founded And Then There Were None, which helps those workers find legitimate jobs. The day Johnson spoke to me, three workers had contacted her and the total number of abortion defectors seeking her help rose to 483.

See where "Unplanned" is showing at UnplannedTickets.com.