November 3, 2012
Most people have heard the expression, "playing the race card." The concept has been bandied about in the media for several years. It typically refers to someone falsely alleging another person is racist in order to gain some political advantage or to draw their credibility into question.

There is a similar practice in Christian circles that has also been widely used for many years, although it's not been named, at least I don't think, until more recently. But it's called "playing the Pharisee card." The origin of this expression is difficult to trace, but it typically refers to some Christian accusing another of being Pharisaical. Just like playing the "race card," it's used to gain an argumentative advantage over another and to discredit, without carefully considering a fellow believer's contentions.

Christians who are the victims of the dreaded "Pharisee card" are all too often those who have the moral courage to defend doctrinal purity in the church. They stand for righteousness and holy living. They faithfully present to men, whether in the church or in the culture, a message based on a certain, "Thus said the Lord." Yet they are unjustly portrayed as too narrow-minded, too rigid, unloving, intolerant, and without compassion.

Clergy from the left are quite adept at hurling accusations of being a Pharisee at preachers on the right. And is it any wonder since their view of Jesus himself seems so skewed by the political correctness of the day? They see Jesus as someone who would always speak of peace and love without being divisive. Yet Jesus said his way would divide even family members. They always speak of Jesus as tolerant and inclusive. Still, Jesus said there was only one way to God and that was through Him. They rarely, if ever, open their mouths against sin and proclaim judgment, nevertheless, no one more than Jesus lifted higher by word or example the need for genuine holy living. And Jesus spoke more about hell then he did about heaven.

So, for what reason did Jesus really fault the Pharisees? He faulted them for their twisting of the absolute truth of God's Word. He complained against them for the way they made the clear teachings of Scripture null and void to accommodate the opinions and traditions of men. He faulted them for laying burdens on others that they were unwilling to carry themselves, leveling at them the charge of "hypocrites." 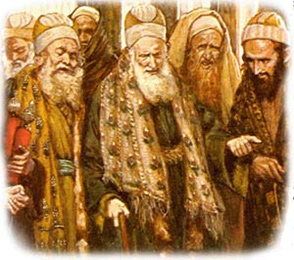 Therefore, quite frankly, the label Pharisee appears more appropriate for liberal clergy. It is the liberal theologians, the progressive churches, who have twisted the truth of God to pander to the culture, affirming a woman's so-called right to choose to destroy an innocent and helpless human life, affirming homosexuality, and advocating socialistic economic policies. Their idea of helping the poor and the needy has more to do with coveting what's in their neighbor's pocket and forcing him to give it to the government for public assistance than rolling up their own sleeves and sacrificing.

And who is more unloving and intolerant in their ways than the left? They claim they want equality for everyone, but work to silence, shame, and permanently shut-down the voices on the right. Did someone say, "Hypocrites?" Better still, did someone say "Pharisees?!"

No wonder, unfortunately, so many pastors who know the differences between right and wrong are yet cravenly silent. They are mortified that this unjust accusation — this illegitimate use of the label, "Pharisee," might be employed to describe them. They fear even the perception that others could see their ministries as uncaring, bigoted, hateful, critical and small-minded. But they fail to recognize that no person is more caring, more loving, and of larger character than the individual willing to risk and even suffer the wrath of another to lovingly tell them the unwanted, but unavoidable and necessary truth.

In contrast, the critic who uses "the Pharisee card" sits quite comfortably basking in the glow of the acceptance, popularity and praises of men, while the world around him goes to hell in a hand basket. Like Lot sitting in the gates of Sodom, he says nothing in the face of atrocities of morality and justice. He carries no cross as His Lord commanded. He calls those who are good evil and to those who actually are sinful, he offers no rebuke. How convenient!

Shame on those who play "the Pharisee Card." For they demonstrate that they are unwilling to suffer with Christ that they may also reign with him (2 Tim. 2:12). Worse still are those who fold, when the card is played.

Dr. Mark Creech gratefully acknowledges that his editorial was inspired by and drawn from an article written by Todd Wilkin titled, Playing the Pharisee Card