Rev. Mark H. Creech
'A world that is not yet, but ought to be'

October 17, 2015
In the great model prayer that our Lord gave to his disciples, we are provided with perhaps the most perfect desire in a prayer that one could ever entertain for the world. In the short prayer, Jesus prayed, "Our Father, which art in heaven...Thy kingdom come, thy will be done on earth as it is in heaven" (Matthew 6:10).

This is the powerful hope at the core of Christian affection – our vision for a world that is not yet, but ought to be.

I can take no credit for the eloquent phrase, "a world that is not yet, but ought to be." I acknowledge that axiom comes from a sermon of more than a half century past written by the late Southern Baptist, Theodore F. Adams.

In the sermon, Adams shares a prayer offered by his brother for a special occasion that he said meant a great deal to him, in part, because his brother delivered it before his death. The prayer by his brother, Dr. Earl Adams, reads:


"Bless O Lord our great nation, and grant that we may ever share in the fulfillment of the prayer of the ancient prophet that 'justice may roll down as waters and righteousness as a mighty stream.'

"Correct us, O Lord, where we are wrong. Confirm us wherever we may be right. Grant us wisdom to distinguish thy will and courage to do it. Give to each of us a steadfast heart which no unworthy affection may drag down, a clear vision which cannot be warped away from truth, a firm loyalty which cannot be tempted aside.

"As we have mastered nature, so that we might gain wealth, help us now to master the social relations of mankind that we may gain justice, peace, and a spirit of brotherhood.

"Grant us a vision of the world that is not yet but ought to be, and in loyal devotion to its appearing grant us the peace of those who strive for it in spirit and in truth." [2]


Adams prayer is not only consistent with the way Jesus taught his followers should make their petitions to God, but it also clearly articulates the Christian worldview. It points to a world that is not yet, but ought to be.

Everywhere we look in the world there are serious tensions and conflicts – economic struggles, racial and social struggles, lawlessness, violence, addiction problems, the threat of war – great moral and political challenges. And if the kingdoms of this world are really to become the kingdom of our Lord, then it is the duty of everyone who names Christ as Lord to see that he really does become the Lord of all of life.

Certainly this involves engagement by Christians in the public arena.

I like something which Tom Minnery has written in his book, published in 2001 and titled, "Why You Can't Stay Silent." Minnery says churches are seldom involved in the area of public affairs, but he also contends this is a shame. He says "in few other fields of endeavor will a Christian get to know and work as closely with people whose deepest beliefs are alien to their own." [3]

Minnery adds: The proper role for the Christian citizen is to participate in government as fully as his calling and skills can take him, whether it be limited to voting or as an active government leader. When the sparks fly over moral issues in the councils of government, how much more effective it is (and honoring to Christ) to have skilled Christian people at the center of the debate, in full possession of the facts...Sometimes, of course, this isn't enough, and the moral position is defeated. But many times the impact of Christian leaders on difficult moral issues is astounding." [4]

Some Christians, however, are quite dismissive of this point.

Recently I was reading after a great Christian writer I deeply admire, but on this occasion I had to strongly disagree with him.

He told a story about a church officer who came to his Sunday School class wearing a large pin promoting a certain candidate for President. The pastor urged the man to take off the pin. The church officer protested, saying, "Why take it off? He's a perfectly good candidate for President!" "Well," said the pastor, "it might offend someone of a different political party and keep him from hearing the Gospel and getting saved?" So the man acquiesced. The writer then went on to imply that this was the proper role of Christians. In other words, Christians must be careful of all things political lest they offend unbelievers and cause them to stumble and turn away from the Gospel.

I can certainly understand why some might be squeamish about hawking a certain political candidate or party at church. Nevertheless, Christians must also see that many of the issues of our day are of great moral import and intertwined closely with politics. I would even go so far as to suggest involvement in current politics by God's people should not be seen as a hindrance to evangelism, but instead the springboard for presenting Christ to the masses.

What's happening in public affairs nowadays is a clear and present demonstration of the reason Christ died on the cross – the sinfulness and brokenness of mankind – the need for redemption. He came to save the nations – to make a world that is not yet, but ought to be.

Let me once again refer to the stirring words of Theodore F. Adams. He wrote:


"The world that ought to be" – that is the world that Jesus came to teach us about, the vision he shared, and the world he sent his disciples to win.

"To be sure, we do not have the exact blueprints of it all...

"But we do have the basic principles and convictions, the fundamental truths and concepts for the world that ought to be. We need to constantly ask about every issue that comes up: 'Is this true to the Word of God? Is it true to the spirit of Christ?'

"In our relationships as Christians, some of our basic concepts, interestingly enough, are voiced for us in two salutes that we say year after year and which we teach our children. 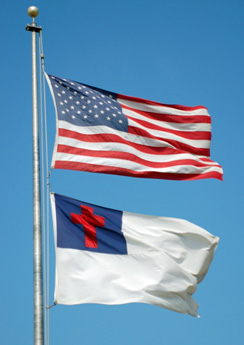 "In the salute to the American flag we say, 'One nation under God, indivisible with liberty and justice for all.' In saluting the Christian flag we add: 'And to the Savior for whose kingdom it stands, one brotherhood, uniting all mankind in service and in love.' Only as we live and abide day by day by those basically Christian concepts can we ever have a world with peace on earth and goodwill toward men.

"For such a vision our prophets and missionaries have lived and suffered and died. It was for such a cause that Jesus took up the cross and said, 'If any man will come after me, let him take up his cross and follow me.' It was for that vision the early disciples went out to die as martyrs. It was that compelling dream that led Paul to go on his long and arduous journeys and at the end triumphantly cry, 'I have fought a good fight, I have finished my course, I have kept the faith.'" [5]


And may I add, it was this same vision that Jesus articulated when he taught us to pray, "Our Father, which art in heaven...Thy kingdom come, thy will be done on earth as it is in heaven."

It is not simply for the saving of souls believers strive, it is also for "a world that is not yet, but ought to be."

[1] Friel, Billie Kessner. Citizens of the Kingdom: Interpreting the Sermon on the Mount for Daily Living. Nashville, TN: Broadman, 1992. Pg. 157