April 16, 2009
"An unlimited power to tax involves, necessarily, a power to destroy, because there is a limit beyond which no institution and no property can bear taxation."
 John Marshall, McCullough v. Maryland, 1819 (www.PatriotPost.us)

THE TOP TEN MISCONCEPTIONS ABOUT "SOAKING THE RICH":

1) Fat Cats and Big Corporations HAVE the trillions of dollars that the government is spending.

2) If they DID have that much money, taking it away from them would be good for America.

[It wouldn't. Our creative "Yankee ingenuity" would come to a dead stop, and the economy.]

3) Even if they did have that much money and it wouldn't stop creativity, it would be a moral thing to do.

[No, it would be a very immoral thing, though immorality has never stopped the Left.]

4) The money owned by Fat Cats and Big Corporations is just sitting around doing nothing.

[NOT. Any money in a "savings" account is still circulating through loans, whether it is an individual's account or a "Fat" man's savings account (and it grows through circulation).]

[Social Security already has built-in bankruptcy; too many payees, not enough payers.]

7) We can always come up with some gimmick to keep writing the checks.

[NOT! Social Security is a Ponzi scheme that does a disservice to the Ponzi family name.]

[If the Federal government were a private charity, the CEO would be in prison for waste and fraud and unreasonable "advertising" and "collection" and "distribution" costs.]

9) "Times have changed; the Founding Fathers would understand now."

[WRONG. What is happening now is exactly what the Founders warned us would happen.]

10) "Economic issues and social issues are in totally unrelated categories."

[Wrong again! It is no coincidence that we are on the verge of economic bankruptcy forty years after the moral bankruptcy of the Woodstock sexual "revolution."]

"Liberty will not long survive the total extinction of morals . . . As long as the people are virtuous they cannot be subdued; but when once they lose their virtue they will be ready to surrender their liberties to the first external or internal invader."  Samuel Adams

THE GOOD NEWS IS THAT MORALS HAVEN'T BEEN "TOTALLY" DESTROYED. The day's TEA parties should be a hint to the mainstream "news" media that, yes, there are still "two Americas."

But the "evening news" may feature more photo ops of the White House puppy than of the TEA parties. How is Katie Couric going to consider herself a source of "news" unless her teleprompter says something about the TEA [Taxed Enough Already, or, Texas Excels All] parties?

But all it would take is one infiltrator disguised as a "redneck" causing a "disruption" at one TEA party, or a handful of counter-protestors at another one, and you can bet on it that that will be the lead story on the evening news. Janet Reno Napolitano's "intel report" a few days before the TEA parties, was probably designed more to "promote" violence than to "prevent" violence. But I doubt that a Liberal would be able to pull off a believable imitation of a "redneck" (not to imply that the protestors really are rednecks, of course).

In today's "two Americas," most of the thinking is being done on the right side of the "aisle." Janet Reno Napolitano's report lumps more than half of the population of the USA into one category: "dangerous"! She  and her friends in her department  are very sure of their conclusions, but as General Patton shrewdly put it:

"If everybody is thinking alike, someone isn't thinking." THINK ABOUT IT!

Samuel Adams said, "We have receiv'd [our constitutional liberties] as a fair inheritance from our worthy ancestors: They purchas'd them for us with toil and danger and expence of treasure and blood . . It will bring an everlasting mark of infamy on the present generation, enlight'ned as it is, if we should [allow] them to be wrested from us by violence without a struggle  or be cheated out of them by the artifices of false and designing men . . .

"Let us remember, that if we [allow] tamely a lawless attack upon our liberty, we encourage ['enable'] it, and involve others in our doom.' It is a very serious consideration, which should deeply impress our minds, that millions yet unborn may be the miserable sharers in the event . . .

"Our enemies have made it an object, to eradicate from the minds of the people in general a sense of true religion and virtue, in hopes thereby the more easily to carry their point of enslaving them."

"The better to eat you with," said the Big Bad Wolf (or was that Charlton Heston in the movie "Soylent Green"?).

P.S. Speaking of "green," the global warming enthusiasts will be disappointed to read that we still have a lot of snow in the Upper Peninsula of Michigan. I personally have mounds of snow left over from November, half-way through April, on the south side of my house.

1) "Green Hell: How Environmentalists Plan to Ruin Your Life and What You Can Do to Stop Them," by Steve Milloy ["Proven false: the claim that the election of Barack Obama and the expansion of Democratic majorities in the House and Senate imply strong public support for Green policies"]

2) "Red Hot Lies: How Global Warming Alarmists Use Threats, Fraud, and Deception to Keep You Misinformed," by Christopher Horner, the author also of "The Politically Incorrect Guide [TM] to Global Warming."

A couple of highlights from Red Hot Lies:

"How Laurie David, Al Gore's co-producer, followed their dishonest film with a book aimed at children  and why global warming alarmists work so hard to win children to their 'cause' . .

"How global warming materials distributed in schools routinely list numerous negative consequences of the phenomenon, but fail to mention any benefits of [any future] rise in temperatures, including higher crop yields and forest expansion" [toward the poles].

These books are available at www.ConservativeBookClub.com. I could mention my own new book too ("Massey-Harris 101"), but I won't.

PPS: Craziest headline of the week: "Nation has new first dog." That appeared at the top of page one on the USA TODAY (4/13/09), along with a picture (higher up than the story, "Navy snipers rescue 'heroic'captain, kill 3 pirates." That was the birthday of Thomas Jefferson, our first President to declare war on Muslim piracy. No one ever observes that birthday though, and it isn't even noted on most calendars (although we have a whole month for 'black history').

As for the "first dog," I buried my "last dog" on the same day the First Dog photo ran. I could show you a picture of "Junior" that looks nearly identical to the White House pup, but "Junior" was born with water on the brain, and only lived 4 1/2 months. I guess I needed a good cry. I have been so concerned for America since November that I haven't even been able to cry.

Junior deserved a lot better than life provided, but as you conservatives know, life isn't fair always. See the photo of "Brandy Junior" at the end of this column. He had no interest in retrieving sticks or balls like his dad, but he immediately took to trying to pull a sled like his Alaskan mother. If there's a lesson in this photo somewhere, it reminds me of that old saying, "There's too many people in the wagon, and not enough people pulling the wagon." 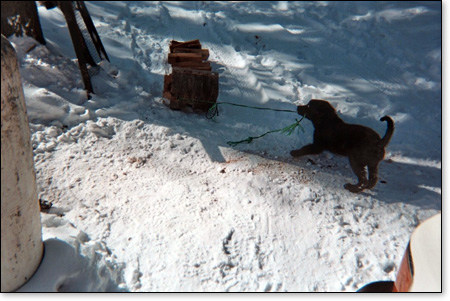 March 6, 2021
HEY JUDE (the real one) and the sermon notes of Enoch, seventh from Adam

March 5, 2021
The Ayatollahs of atheism versus the next generation of evangelists?