BRACE YOURSELF. A huge disinformation campaign is coming. The Media Research Center says that it studied 280 "news" stories about rising fuel prices and that only 3 of them mentioned any possible connection between the White House "green" policies and the price of gasoline. "Not our fault!" they are going to say. "There's just too much 'gouging' going on out there." HOWEVER:

"Supply goes up, prices go down; supply goes down, prices go up." That's all one essentially needs to know about the economics of oil and gas prices, but here are a few additional thoughts.

While fighting global cooling with my wood stove these days, I've been burning some old newspapers and ran across a very interesting USA TODAY — Feb. 22, 2007 — and the article "Crude oil prices climb above $60 a barrel":

"Oil prices jumped Wednesday, topping $60 a barrel for the first time this year as a series of closings at oil fields and refineries combined to spark some supply jitters . . .

"Federal Reserve Chairman Ben Bernanke last week credited lower oil prices with helping to lower the inflation rate and boost the economy . . . Despite the gains of the past month, oil prices are still far from the record, not adjusted for inflation, of $77 hit in July . . .

"The nationwide average price for a gallon of regular gasoline was $2.28 Wednesday."

WOW! Gas was less than $2.30 a gallon in 2007, seven years into the Bush 43 Administration. Gas averaged $1.84 when Oboma was innaugurated, but it is over twice that high after two years of "Green Energy" — over four dollars a gallon and still rising!

In the 2006-07 period, Nancy Pelosi was blaming "high" gas prices on, quote, "a government run for the oil companies," unquote. A few days ago, a friend of mine was still blaming Bush — over four years later — for today's $4 gas, because "the Bushes were oil men." I don't want to embarrass my friend, but he probably doesn't read newspapers anyway (some of our most 'outspoken' people never do).

BLAMING OIL MEN FOR A GAS SHORTAGE IS LIKE BLAMING SNOWMEN FOR COLD WEATHER.

But think about it: "Oil men" make money selling petroleum, and they sell more when the price is low. Companies such as Halliburton make money on sales and service of oil drilling equipment, and the less drilling, the less money they make (while the more drilling, the greater the supply of oil, meaning lower prices at the pump).

Those oil companies prefer lower crude oil prices — and stable prices — because they have to buy oil on the world market too, you know. The less they are allowed to drill for, the more crude they have to purchase.

And we all know that the Obama Administration is discouraging drilling (not by Brazil or China or Cuba — 60 miles off Key West, Florida but by American companies). The other day he even hinted that our "oil men" may be engaging in price gouging. He knows better, but he's hoping half of the population doesn't know any better. By the way, speculators on oil futures are not exactly the same people as the explorers for more oil.

The speculators could be reined in a little, but the Prez will be railing on "Big Oil's" profits, but what is a profit in that business? Profit is a future exploration dollar that just hasn't been spent as of yet! And the more that the government restricts drilling, the more he can rail on those "profits."

After spending four billion dollars on leases and permit applications, Shell may have to abandon hope of drilling off the coast of Alaska — on account of a town with a population of 240–70 miles away from the drill site! How many other companies are losing billions sitting on unused leases and drill rigs while the EPA, et al, sit on permit applications?

But the Prez says we will be the "number one customer" for the Brazilian project he is financing with our dollars (the dollars that are shrinking in value every day).

Wholesale food prices jumped 3.9 percent in February (due to transportation costs as well as the production of ethanol from corn). In his mind, the President thinks his "greenie" agenda trumps life, liberty, and the pursuit of happiness (the right to drive your car where you want to drive it). The camping and tourism industry is going to die on the vine.

In an article by Jon Rappoport at NewsWithViews.com (2/21/11), he said that "in order to make the dream of alternative energy come true . . gas at the pump has to go up to around eight dollars a gallon . . Globalists are devoted , of course, to alternative energies like solar, wind, geothermal — not because they're affordable, but because they level the playing field for nations, and put U.S. industry under the gun. Real globalists don't want more energy, they want less.

"The game isn't a tough one to play. Stop offshore drilling in the U.S., put oil and gas producing U.S. lands into federal ownership, where they will sit there and produce nothing . . . Poof — 'affordable' alternative energy."

Just words? Just speeches? The President is a globlalist by his own words and actions, and he couldn't care less if the cost of energy "sky rockets" (the better to wean us off our so-called "oil addiction," he imagines).

Energy Secretary Steven Chu said, "Somehow we have to figure out how to boost the price of gasoline to the levels in Europe." **

Liberals have been saying openly for years that we should be "more like Europe" and they mean it! Obama's good friend George Soros, in 2006, said:

"The main obstacle to a stable and just world order is the United States."

That's the same man who collapsed the British pound in 1992. With friends like this, we don't need more enemies, do we? He means that a STRONG USA is an obstacle to the New World Order.

How deep is the Left-wing media in Obama's pocket? For the answer look no further than their lax, misleading coverage of the super-charged rise in gasoline prices. 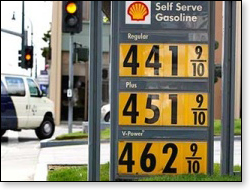 The Media Research Center lifted the hood, and discovered that of the 280 oil price stories since the Deepwater Horizon oil spill, only 3 bothered (a scant one percent) to make any connection between the administration's anti-oil policies — including their drilling moratorium...

[PPS: During the 8 yrs. of Bush, the "oil men" in the White House were always blamed for every rise in gas prices, no matter how temporary! What is wrong with today's picture?