MARCH 8, 2013 was the thirtieth anniversary of another very important speech by Reagan, to the National Assn. of Evangelicals, in which he said:

WELL, last week we heard a couple of disturbing stories in the news. One said that 80 percent of public high school grads in New York City can't read. The other story from the other end of the country informed us of the fact that many if not most of the nursing home employees are not permitted to perform CPR.

Earlier this year a California "beauty" contestant was asked her opinion on euthanasia. She said she didn't know much about it, "except that it was a drug"! President Monroe predicted that the time could come when our people would become "ignorant and corrupt." We're on our way to becoming both.

Some of the more important aspects of my columns are history, humor, semantics, and examples of paradoxes – because the Liberals just can't handle paradoxes. Here's one:

"If any man seeks for greatness, let him forget greatness and ask for truth, and he will find both." – Horace Mann

Congressman Mann was noted for improving education standards in the 1800s – not with federal aid but because of the reports he published analyzing education. With only 20 percent of NYC public school graduates able to read, to whom do we owe THAT fact? How about the fact that the dropouts are even more illiterate? AND they vote!

And as for "never giving away our freedom," what do you think you're giving away when you give away your right to life?

Sadly, many church people refuse to even fight back. Many church people confuse the issue of euthanasia and the issue of "extraordinary means of extending life" (they're against the latter, but those are two different subjects altogether). Many people are totally oblivious to the anti-life movements out there; just Google "Hemlock Society" or "assisted suicide" sometime.

For those out there who can still read, let's clarify some terms:

- "Cap and Trade": When you can no longer afford electricity, just put on your cap and go out naked and fall into a snow bank and go to sleep, trading your cap for angel's wings (it will save the government the cost of the pill).

I admit, humor has its limits, but you get the point. The day-to-day news is so dramatic that I cannot understand why some people read fiction or the funny papers! Speaking of paradoxes and ironies, there's an Italian proverb that says:

"At the end of the game, the pawns and kings both go back into the same box."

Not that there will be perfectly equal distribution of rewards in the Afterlife. Nor that all kings are equal. My Reagan quotations this week are from "God and Ronald Reagan; a spiritual life," by Paul Kengor (Regan books, 2004). Here are a few timely and timeless ones:

"How can we survive as a free nation when some decide that others are not fit to live and should be done away with?"

"There is a great hunger for a kind of spiritual revival in this country, for people to believe again in things that they once believed in – basic truths and all . . .

"It is time for the world to know our intellectual and spiritual values are rooted in the source of all strength, a belief in a Supreme Being and a law higher than our own . . .

"I'm accused of being simplistic sometimes, but within that single Book [the Bible] are all the answers to all the problems that face us . . . The cause of freedom is the cause of God . . . 'Where the Spirit of the Lord is, there is Liberty."

That will probably blow the minds at the Freedom From Religion Foundation, but my personal favorite is I Peter 2:15-16: "For so is the will of God that with well-doing you may put to silence the foolishness of ignorant men, using your Freedom." I'm working on a much longer essay on that scripture, but anyway – for now – here are some more excerpts of Reagan's "preaching to the pastors" in 1983:

"I urge you to speak out against those who would place the United States in a position of military and moral inferiority . . .

"I urge you to beware the temptation of pride – the temptation of blithely declaring yourselves above it all and label both side equally at fault, to ignore the facts of history and the aggressive impulses of an evil empire, and thereby remove yourselves from the struggle between right and wrong and good and evil . . "

Yes, Reagan was specifically talking about the Soviet Empire, but we still have "challenges" from within and without, including keeping an eye on the "new" Russian empire. The Gipper's speech to the Evangelicals concluded something like this:

"I believe we shall rise to the challenge . . because the source of our strength in the quest for human freedom is not material but spiritual. And because it knows no limitation, it must terrify and ultimately triumph over those who would enslave their fellow man. For in the words of Isaiah:

" . . 'they that wait upon the Lord shall renew their strength; they shall mount up with wings as eagles; they shall run, and not be weary . . . '

"Yes, change your world. One of our Founding Fathers, Thomas Paine said, 'We have it within our power to begin the world over again.' We can do it, doing together what no one church could do by itself.

"God bless you, and thank you very much."

So ended the "evil" Evil Empire speech. Can one still be won for the Gipper? "Winning isn't everything," said Arnold Palmer. "But wanting to is." What this country really needs is a few good Pastor Niemoller and Bonhoffers.

[My neighbor took the photo of this golden eagle in front of his house, about 4 doors upstream from mine in the U.P. of Michigan.] >> 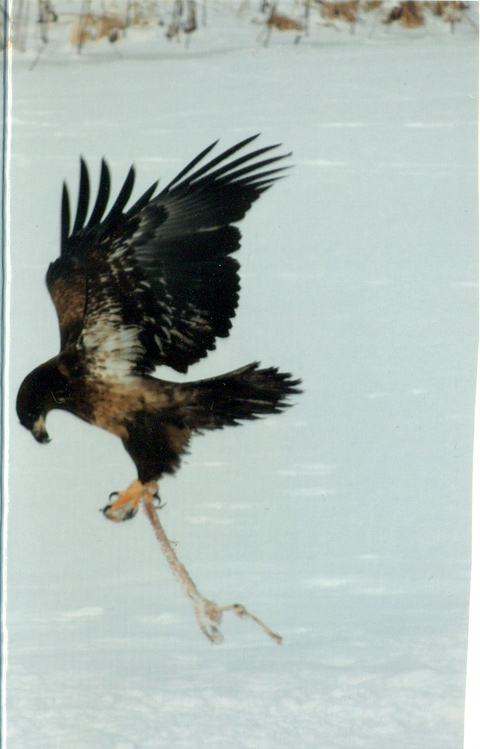