Peter Lemiska
Dems learn that what goes around comes around 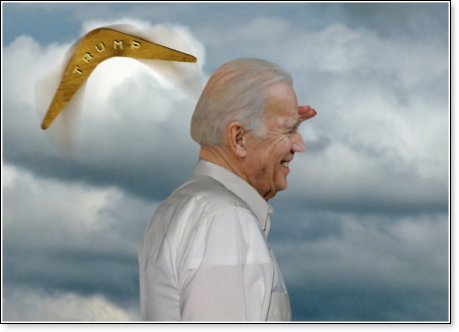 You’ve got to hand it to the Democrats. Once they set their minds on something, they won’t let it go.

When Donald Trump won the presidency in 2016, they were mortified. They despised Trump because he was an outsider, because he defeated their odds-on favorite to win the election, and because he openly mocked his political opponents. They hated him because he vowed to put America first. In fact, his presidency did give us a robust economy, low inflation, energy independence, and a secure border.

But Democrats were unimpressed with Trump’s successes. They decided he had to go and he must never be allowed in politics again.

So first, they fabricated the Russian collusion story, accusing Trump of conspiring with the Russians to win his election. Trump was exonerated after a lengthy and costly investigation by a special council. We later learned that Hillary Clinton, the Democrat candidate, actually approved the plan to spread the false story.

After Trump’s vindication, Democrats were undeterred.

Their next opportunity came on July 25, 2019, based on a telephone call between President Trump and Ukrainian President Zelenskyy. A U.S. Army officer, assigned to the National Security Council, had access to the call, and decided some of Trump’s remarks were “improper.” He filed a complaint with the lead counsel for the NSC.

Most of that telephone conversation was innocuous, but in his closing remarks, Trump added, “There’s a lot of talk about Biden’s son, that Biden stopped the prosecution and a lot of people want to find out about that so whatever you can do with the Attorney General would be great.” He was talking about the Burisma scandal.

Democrats had no interest in the documented fact that Biden, as vice president, did force the Ukrainian government to fire the prosecutor investigating Burisma and Hunter Biden’s business dealings. But they did latch on to Trump’s remarks, arguing that they could be construed as a “high crime.” Since Democrats controlled the House of Representatives, they had no trouble launching impeachment proceedings – which, of course, failed in the Senate.

Then came the January 6, 2021 incident at the U.S. Capitol, spawned by voting irregularities in the 2020 election. Democrats immediately called the skirmish an attempt to take over our government and blamed Trump for inciting an “insurrection.” That became the basis for his unprecedented second impeachment, which also failed.

But Democrats were now more determined than ever to end Trump’s political future, so they assembled a one-sided panel, the January 6th Committee, which held endless televised hearings, clearly intended to sway public opinion.

On August 8, 2022, The Attorney General and Biden’s Department of Justice pulled out all stops. They did something that had never before been contemplated in America, something that is only done in third-world countries. They decided to throw the full force of the government against a former president. They used the FBI to execute a brazen, armed raid at Trump’s Mar-A-Lago residence, which was secured by armed Secret Service agents. Ostensibly, they wanted to recover classified documents, which Trump argued had been declassified.

Putting aside the heavy-handed tactics of the DOJ and FBI, the mind-blowing hypocrisy was obvious. It was just a few years prior, during Trump’s first presidential campaign, that the FBI Director casually dismissed an egregious breach of national security by Hillary Clinton, Trump’s political rival. He acknowledged that, as Secretary of State, Clinton’s reckless use of an unapproved private server violated the law and likely exposed national security information to our global adversaries. Then he went on to say that the case was just not prosecutable.

But none of that mattered in the wake of the Mar-A-Lago raid. Democrats who were not openly exuberant were at last content. They talked about Trump’s breach of national security and the need for accountability. They reminded us ad nauseam that “No one is above the law.” Joe Biden was more subdued, but just as critical. He confided his thoughts during a 60 Minutes interview, “How could that possibly happen?” He wondered, “How anyone could be that irresponsible?”

But those pontificating Democrats are now learning there’s truth in the adage, “What goes around comes around.”

With the revelation that improperly stored classified documents were found in Biden’s garage and other places under his control, supporters scrambled to explain it away. But having already appointed a special counsel to investigate the case against Trump, and with the DOJ credibility already stretched to the limit, the Attorney General was forced to appoint another special counsel.

Given the clear political bias of this AG, Americans know that Biden has nothing to worry about by this appointment. But there’s another issue that should concern him.

Now that Democrats lowered the threshold for impeaching a U.S. President, Biden could soon face his own impeachment proceedings. The new criteria established by Democrats requires nothing more than a House of Representatives controlled by the opposition party, and any improper action by the president.

If Joe Biden does become the fourth president to be impeached, don’t call it retribution by Republicans. Impeachment is completely justified by Biden’s malfeasance – his defiance of immigration laws, his refusal to protect America’s border, and the disastrous impact it’s having on our country. Add to that the unmistakable signs of influence peddling – the vast sums of money the Biden family received from countries like Ukraine, Russia, and China. Followed by such inexplicable foreign policy as the sale of our strategic oil reserves to China, reasonable people are beginning to demand answers.

Maybe it’s Karma, but Biden and the Democrats are the biggest contributors to his precarious situation.