May 20, 2010
"The peak of tolerance is most readily achieved by those who are not burdened with convictions," Alexander Chase, Perspectives (1966)

Romans 1:26 For this reason God gave them over to dishonorable passions. For their women exchanged the natural sexual relations for unnatural ones, 1:27 and likewise the men also abandoned natural relations with women and were inflamed in their passions for one another. 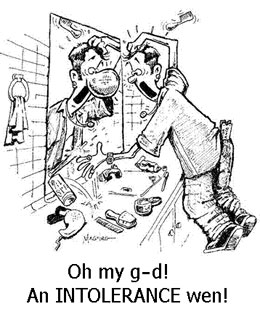 In 1966, writer LeRoi Jones wrote, in "Expressive Language," "Words have users, but as well, users have words. And it is the users that establish the world's realities." Or, as I have put it, "The powerful imagery of a single weapon-word is more powerful than a thousand pictures."

America has lost its direction in our Pilgrim's Regress. Our everyday language has been Babel-ized, thus contorting our thinking. The abstracting of imagery by those who have a self-promoting agenda blinds us to actuality. We fail to see, hear, and feel judiciously.

In writing about "Selling Homosexuality to America," Regent University's Paul Rondeau tells us that, "The extensive three-stage strategy to Desensitize, Jam, and Convert the American public is reminiscent of Orwell's 1984 premise of goodthink and badthink."

Rondeau uses, as an example, the marketing psy-ops gospel of Harvard University's Marshall Kirk and Hunter Madsen's After the Ball: How America Will Conquer Its Fear and Hatred of Gays in the '90s: "We mean conversion of the average American's emotions, mind, and will, through a planned psychological lstrategy in the form of propaganda fed to the nation via the media. We mean subverting the mechanism of prejudice to our own ends  using the processes that made America hate us to turn their hatred into warm regard  whether they like it or not."

I am not writing about the "Gay" line, per se, but about the strategy used to disarm citizen reaction...that employed by the media, our elected officials, and our education-industry gurus. That manipulated-consensus devised by an elite plutocracy who scramble reality so that a disconcerted populace gives up trying to make sense of it. All done under the "progressivist" fable entitled "Tolerance!"

Is it conspiratorial? Remember, the literal meaning of "conspire" is to breathe together. Though many of the aforementioned are merely in the sympathetic-sentimentalist category, the proselytizing masters strive for "hegemony" (a word used by Kirk and Madsen which means "control") over the minds and hearts of an increasingly utilitarian and complaisant citizenry. And though the conspiracy is loose and dispersed, its "church" is comprised of all those who breathe the same doctrinal air.

Blinding one's self to realities and being care-lessly unburdened by conviction because of personal indifference or pragmatic cupidity is guaranteed to bring down a culture. It always has. As the dark night that follows the effulgent day!

(Prov. 1:29 Because they hated moral knowledge, and did not choose to fear the Lord, 1:30 They did not comply with my advice, they spurned all my rebuke. 1:31 Therefore they will eat from the fruit of their way, and they will be stuffed full of their own counsel. 1:32 For the waywardness of the simpletons will kill them, and the careless ease of fools will destroy them.)

Take a lively tour of England, gaze at every steeple;
Altars, pews, and stained glass...everything but people.
Quondam land of Christ's become a land of condom insolence,
A redolence of churchy smells, and spiritual indolence.

See the grave of good King Edmund in the abbey's traces,
Where the martyred Saxon rests amongst the tourists' faces.
Slouch along to Cornhill's 12th century flint and rubble,
Where the synagogue once stood to Him 'midst joy and trouble.

Ponder, here, this symbol of once Godly land's declension;
Transformed, now, to vacant idol, throne of Man's pretension.
Synagogue, then tavern, then inevitable jail,
Worshiper, to wastrel, on the road from God to Baal.