May 4, 2014
LOS ANGELES,California (5/3/14 – The most vilified person on the planet at this moment is Donald Sterling, a very rich man who has been the owner of the L.A.Clippers Basketball Team. The canons have been firing at him since racist comments made by him to his (extra marital) girl friend during a telephone call was released to the media who ran with it. The furor this has caused over a careless comment was way overblown. 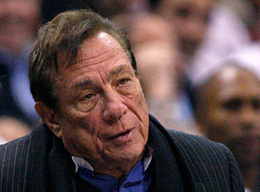 As the late commentator Paul Harvey would say, "Now for the REST of the story." Let it be clear that this is not a brief for Sterling who I would not have lunch with. His actions give Capitalism a bad name. He was an adulterer who did not even hide his peccadilloes from the public but indeed flaunted his latest girlfriend, V.Stiviano, who is described by news sources as, a "Gold Digger."

The media said that both parties to that phone conversation agreed to it being taped. That makes no sense. Why would a sane public figure consent to that? In California, it is a criminal offense to tape a phone conversation without consent from all parties involved.

So why did his Ms. Stiviano want to tape it in the first place? And why would she put that tape in the hands of a "trusted friend" for "safekeeping?" Sounds like a blackmail set up. And too, the tapes heard really appear that his "friend" was leading him into the questionable comments in order to further her goal of gaining some big bucks.

She obviously had already been cashing in, since Sterling's wife sued her demanding the return of more than $2.5 million in gifts, including luxury cars and a $1.8 million duplex. That duplex is in Stiviano's name. Sterling's wife was ruled against by the court. Ms. Stiviano could keep the gifts even though they would be legally classified as community property in California, property owned by both Sterling and his wife, Rochelle. It was not for him to give away unless it was his wife's wish as well. Yet this scheming playgirl not only got by with it but wanted more.

That "trusted friend" that Stiviano provided the tapes to, could see dollar signs as well, and sold the incriminating conversation to TMZ and other media outlets, which of course, dashed the blackmail scheme planned. Even so, Sterling made a public statement that "I should have just paid her off." This man may be a billionaire but that does not mean he has any intelligence.

All of them should have been kicked out of the sandbox. Sterling who has broken his wedding vows, his wife's heart – a woman he pledged faithfulness to forever, has been forced out of the basketball league and pressured to sell his interest in the team.

Now it has been discovered that Sterling has cancer. He will die in disgrace with the definition of one who totally missed God with his sinful lifestyle. That is the legacy he will leave. An entire life down the tubes because of his lack of ethics, responsibility, immorality and dishonesty

Race baiting has reached epic proportions to inflame blacks and whites against each other, for the purpose of weakening our society, making America ripe for Communist takeover. Blacks and whites must take a stand to stop this in its tracks.

For example, in an AP report this morning, Obama weighed in on the botched execution of Clayton Lockett in Oklahoma yesterday, with this statement: "Lockett's crimes were 'heinous' but the application of the death penalty is problematic, with evidence of racial bias." How's that again?

Lockett with accomplices beat a man in front of his 9 month old son during a robbery...took captive two women, bound them with duct tape, raped them, then drove them to a remote area where Lockett shot and killed one of the women with a sawed off shotgun. But wait, you can't punish this man, that would be racism because he is black doncha know?

One cannot criticize Obama for any of the stupid empty-headed decisions he has made that is wrecking this country, because, he says, those critics are simply racists and can't stand it that a black man is in The White House. (?)

For years the socialists have taken careful steps to fan the flames of racial hatred by inventing terms like, "White Privilege" that puts the black man at a disadvantage. In reality more whites than blacks struggle by with back breaking work in order to support their families. Where is the "white privilege?" Yet the blacks have taken this term to 'identify' their oppressors who, they are made to believe, make their lives miserable. That means anyone who is white.

Al Sharpton and Jessie Jackson, (I will not use term "Reverend" even as a courtesy for either of them because they are NOT), are the real Race Barkers, a term coined by Coach Dave Daubenmire in his story by that title. They basically make a big living by intimidating industries and businesses to 'contribute' to them, so they are never misunderstood as racists. Leonard Pitts of the Miami Herald raves in all of his columns about the evil of "white people." yet that is never challenged. Why not?

Blacks, and whites – wake up! Can't you see how all of us are being duped and manipulated to sap our strength? Time to put a stop to this.

When I was in college, a class was discussing the box on most forms and applications labeled, RACE. With so many mixed races, how does one answer that? I popped up and said, "Simple. Just mark,Human." That is the race all of us belong to.