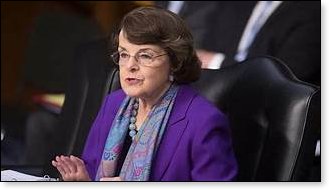 WASHINGTON, D.C. 9/26/18-The talk around the water coolers for the past week has centered around a proclaimed 'Professor,' Christine Blasey Ford (not acclaimed but self PROclaimed) at the University of California–Palo Alto, who sent a letter of woe to Senator Dianne Feinstein, a fellow Democrat.

The very poorly written letter rambles on about a sexual assault against her by Supreme Court Nominee Brett Kavanaugh – which supposedly happened 36 years ago when they were teenagers still in school, even though when questioned she did not know where it happened, whose house it happened in, how she got to the house, who brought her back home. She must have really been sloshed.

The so-called witnesses to this sexual assault, four of them, all denied being near them or seeing the conduct described by Ms. Ford and have testified to that fact.

That accusatory letter was sent in July. Senator Feinstein held onto that letter until the confirmation session for Judge Brett Kavanaugh to serve the Supreme Court was only a few days from starting. Of course, that is when it would do the most damage. The timing was carefully planned.

The letter that appeared to be written by a sixth grader, accused Judge Kavanaugh of drunkenness and trying to undress her with his hand over her mouth so she couldn't scream, so violently, that she (gulp!) feared for her life.

This Democrat woman must have been a real knockout for a fellow student to lose all control in her presence. These Democrat women do have a unique form of beauty as you see in Dianne Feinstein, Nancy Pelosi and Jackie Spears.

This writer went on an extensive search to learn if Judge Kavanaugh was indeed a fall down drunk, but nowhere I checked possessed that information.

He would drink a beer now and then but he was NOT a lush. HOWEVER, the accuser, Professor Christine Blasey Ford WAS found to be a heavy drinker as testified in her year books, which have conveniently gone missing... scrubbed from websites. Too late. We saw and copied them.

And it is said that people tend to judge others by their own standard of conduct.

The Congressional Committee said they would give her a hearing to determine if the confirmation hearing should take place. However, she finds no date set by Congress convenient for her. She is supposed to go (tomorrow) Thursday (27th) but it looks like she is going to try to wiggle out of that one as well.

What is this? This woman has viciously slandered a distinguished judge being considered for the Supreme Court and she is given the power to set the date more convenient for her? Really? So she controls Congress?

Lawmakers, wake up. You set the schedule not a rabble rouser. If she comes to testify it will be at the convenience of Congress not her. Her goal is to destroy an excellent Supreme Court Nominee and wants Congress to cater to HER, not Judge Kavanaugh.

She either comes tomorrow (Thursday) or never. We cannot allow her to stall this confirmation any longer.

Ford's Letter to Feinstein: As mentioned earlier, that letter looked like it came from a sixth grader, NOT a university professor! This letter was taken to writing expert Dannielle Blumenthal Ph.D, who after carefully examining the letter, revealed it to be a total FAKE. She stated that the letter was NOT written by Professor Ford. No way. It was written by someone else for the sake of the Democratic Party.

According to Mike Adams of D.C. Clothesline, Dr. Blumenthal showed that "the letter contains 14 glaring errors that could only be committed by a poorly educated writer." She went on to say that this letter could not possibly have been authored by Ford. It was filled with inconsistencies.

Dr. Blumenthal, assisted by writer Mike Adams, are imminently qualified to assess the writing level and composition of letters and articles. Dr. Blumenthal has a Ph.D. in sociology and a bachelor's degree in interdisciplinary studies with a focus on creative writing (h/t to The Gateway Pundit). She has been a professional writer for 30 years and spent 2.5 years handling constituent letters sent to members of Congress.

Mistakes that demonstrate the letter was not written by Dr. Christine Blasey Ford

Ph.D. writers are highly trained in writing. In fact, it is an essential part of their education. Yet the letter released by Sen. Dianne Feinstein is riddled with simple errors that point to a writing level that barely qualifies as "high school" composition skills.

Here are the some of the glaring mistakes and discrepancies in the letter:

The font size of the first line of the second paragraph, where Brett Kavanaugh's name is first mentioned, is oddly 140% the size of all the other lines in the document. This could indicate one of several things: 1) The line may have been altered after the fact by a person who failed to be careful in carrying out an attempted document alteration. 2) The document may have been printed on a printer that suffered a line feed problem on that one particular line. However, this problem would typically reveal horizontal white stripes in the line, and such lines do not appear. 3) The line may have been added in a rushed, last-minute fashion without careful attention to the font size.

Many more writing and composition errors, 14 to be exact, can be found with a Google search.

This link gives many other errors found in the letter to Feinstein. Worth going through since a lot of extra info is given. The link is below:

It is URGED that authorities check Ford's bank account to examine deposits and who made those deposits. Could it be George Soros?

Somebody is paying her off to be the anchor of this Democrat plot to sabotage the nomination of Brett Kavanaugh to the Supreme Court, since they fear he will overturn Roe vs.Wade – legalized abortion, and strengthen the Republican Party.

This is the dirtiest politics this writer has ever witnessed during his 85 years.

The original letter Ford wrote to Feinstein and the letter Feinsten sent to Senator Grassley can be seen by clicking this link:

We are indeed grateful to Lawrence Craig for alerting us to this story.

It is to be noted that Professor Ford had a lie detector test today and she passed. HOWEVER...it is known that one trained in clinical psychology knows how to beat that test.