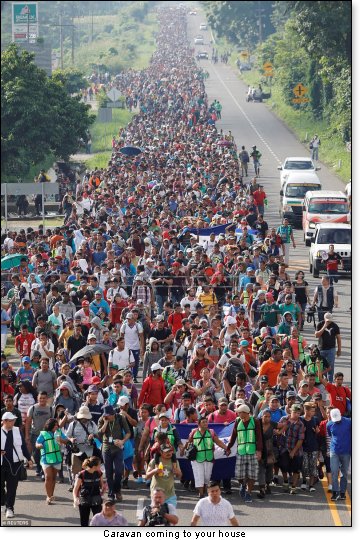 What in the name of the devil's domain caused the president to decide to use uniformed military troupes to confront and stop the caravan consisting of thousands of invaders pushing through the borders to come into the United States illegally to face a military that does not carry weapons? That is what is in place now.

What is worse, the newspapers and all media were notified of this fact and ran with it, tipping off the invaders, which would, of course, embolden the huge mob to 'come on in.' When they arrive at the border leading into America and see these 'soldiers' without arms, they will no doubt laugh, and keep coming.

This writer is a solid supporter of President Donald Trump except for this ridiculous concept. What is more, no doubt there are some of the 'refugees' who have a gun hidden on their person. To send United States soldiers to face a huge mob with the intent to shove their way into this country with no weapons to defend themselves against desperate third world intruders is absurd.

Just imagine a uniformed military officers standing before invaders shaking their finger and saying...."No no. Go back." But that is exactly what they have been ordered to do.

Could you imagine General Patton giving such a stupid order before stopping the Germans during World War 2?

America is to be respected for the fact that they are tough with tough laws that are enforced and to show disrespect for America is at one's own peril. Don't mess with America. Stern measures will be taken when you do. When an act of terrorism takes place on our soil, take down the entire town where the terrorists came from.

These illegals have already burned an American Flag with shouts of anti-American rhetoric. And we will just let them walk in? They plan to come and virtually take over our country. That cannot be allowed to happen.

The invaders have been warned not to attempt to breach our borders. Once they get to the border, a few rounds could be aimed close to the first ones, kicking up the dust around their feet. That should be all that is necessary. They will see we are serious and will not expect to come in and have everything paid for them.

However, for uniformed but unarmed military personnel to try and stand up in front of them and tell them to go back is laughable.

It is not a bad thing for people to have a bit of fear of you. Respectful fear can add punch to what you say.

Depending upon President Trump reversing his order of disarming the military at the border, there is such a thing as a citizen's militia that could be at the border to greet them all. Patriots take notice.