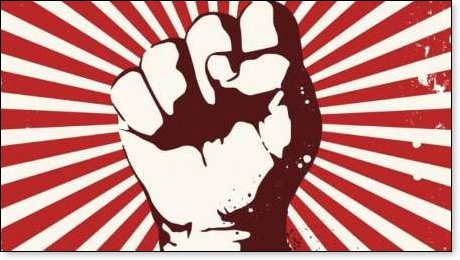 The biggest obstacle restraining the Communist Party from world domination is the church. A true Christian mind cannot be enslaved. The United States of America's landscape is dotted with churches, and America is the only country standing in the way of the Communist One World Order. This is a thorn in the butt for the Reds who have tried every way possible to take over this Land of the Free to satisfy their lusts for global power. Once they have America, they have the world.

At this moment, anarchy has taken over portions of our country, causing severe destruction of property, along with injuries, fires, and of course, looting. They say this is all about, Black Lives Matter, (BLM.) We must give blacks their rightful place in society, so they say. Until then, no peace.

The riots taking place are not organized and carried out by the so-called BLM yarn. It is an out and out Communist take-over movement. And who is behind this? A traitor Jew named George Soros who founded Black Lives Matter and is organizing and funding the riots.

Soros is a rat who betrayed his own people during the war by showing the Nazis where the wealthy Jews stored their valuables, art work, etc. Jews he had made friends with. Soros received a very generous percentage of the wealth that the Germans were able to confiscate due to the traitorous work executed by Soros for his own benefit. By selling out his own people, he made his initial fortune.

The Communists hate the church. Communist China bulldozes churches and makes Christianity illegal. I spent time behind the Iron Curtain during my youth, and saw first hand what a totally empty godless place that is. The people had very sad faces, I mean everyone; those on the streets, clerks in the stores and even those at weddings, that are supposed to be the happiest moments of one's life.

I viewed many, many wedding photos at a photographers shop and every single bride and groom had sad looks on their faces. I went to see a rehearsal of an opera and even though powerful voices were heard, there still was an atmosphere of sadness throughout.

It was the first time in my life that I considered jumping up on something in the town square and preach the gospel. Perhaps it was just as well that I refrained from that idea even though I felt such a passion to do this. There was absolutely no joy in any part of that country. A country that nixed God clearly experienced the result.

With the built up Communist influence, as America is being taken over by them, it is not surprising that the church sabotage is now taking place in The United States of America. And don't think for a moment that the current pandemic of Coronavirus has not been a valuable tool for those who wish to take down this country so it can come under their rule.

Did you know that Nancy Pelosi's nephew Gavin Newsom, Mayor of San Francisco has now made it an order that it will now be illegal to sing in church! After all, singing could spread the virus, sayeth he.

The United States Navy has forbidden any sailor to go to a church service off base or any indoor church service. According to Gateway Pundit  Christians and Jews are being openly persecuted against in the United States while Black Lives Matter militants are given special treatment. They can do whatever they want. Destroy, steal, rape and cause havoc.

There is now zero equality under the law. Churches must be silent while BLM militatants and Antifa terrorists can raise hell on the streets and neighborhoods. This is pure Marxism. NYC Mayor Comrade Bill de Blasio, a real piece of work, defended his decision to ban religious gatherings while allowing BLM militants and Antifa domestic terrorists to take over the streets.

This columnist has warned people for years to prepare for this. It could have been stopped before it started, but people snoozed and simply sought pleasure. And now it is here. Gun sales have risen dramatically as people now must protect themselves.

The war on police officers has reached a point of no return as mayors have been influenced by the bad guys to defund the police departments to such an extent that it is not possible to protect the public.

The jelly-spined leaders have sold out to the Communist Party and cracked down on churches. Meanwhile vulgar movies such as "Habit" starring Paris Jackson as Jesus, who is portrayed as a lesbian, will soon be released. The Reds will encourage crowds to see this trash.

George Soros, the backer of all the evil being loosed upon us, was so sure that Hillary would win the last presidential election that he had her stay with him at his Hampton estate the weekend before. Great preparations were made for Hillary's "victory party," which didn't happen.

Hillary paid several thousand dollars to prepare a big fireworks display over the Hudson River, had a glass ceiling put up in the reception room that she would crash through for her entrance, a huge cake was baked.

Anyway, she lost the election, lost her mind and smashed the cake against a wall, fired two of her staff members and literally screamed her head off. She flipped.

There is now no secret that the Democratic Party is indeed the Communist Party. We have two choices in the coming election. Stay home and Biden is put into office which will be the absolute disaster for America, or get out and vote for the best president we have ever had, Donald Trump. And let us put a lot of prayer into this upcoming election.

Prayer is what put Trump in the White House. Fervent prayer from the masses. And why do you think that the Communist Party is so against the church, God and prayer? That question was settled at the last election. We can do it again in November.

And by all means, let us make God the main factor in all of our lives.