Tom O'Toole
Clinton favors under the table? Rounding up the usual "Sestaks"

June 2, 2010
As President Obama finally arrived and conquered the shores of Louisiana Friday, trying to sound regal while stealing some of the better oil spill ideas of Gov. Bobby Jindal, the White House released a curious and cryptic statement about the failed political deal it tried to make with Pennsylvanian Representative Joe Sestak. As expected, Fox News was the only network who fought to keep this potentially scandalous story alive over the slow Memorial Day weekend, while the stations of the Obama Nation concentrated on the fact that if their messiah wasn't already parting the Gulf stream waters, he was at least calming them. But I think both sides should at least briefly return to the Sestak saga, for the "A Job for Joey" story is a perfect illustration of not only how Obama gets things done, but how he takes us in. 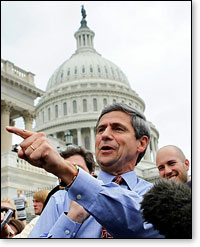 The tale starts with that crusty (and corrupted) ol' Republican Senator, Arlen Specter, seeing his lifetime pass to the Senate about to be revoked, selling his soul to Emperor Obama, agreeing to switch parties and vote whichever way Barack tells him to in exchange for Obama Nation's promise to use their considerable muscle to get Specter re-elected. Suddenly into the Pennsylvania Democratic Primary picture jumps Rep. Sestak, a formidable opponent who not only ardently campaigned for Hillary Clinton during the 2008 presidential race, but appears to be one of the few Democrats left who hasn't fallen under Barack's magic spell. Realizing this dilemma, Obama's chief wizard, Rahm "The Naked Finger" Emanuel, persuades Hillary's old man and ex-president, Bill Clinton, to offer Sestak a prestigious White House Intelligence job if he agrees to stay out of the Senate race. But Sestak not only refuses, but hints on the news shows that the Administration offered him a job to clear Specter's way in the primary, a quid pro quo that at least on paper could potentially lead to impeachment. Feeling pressure, the White House releases the "white out" version, in which someone outside the Administration (President Clinton) suggested a non-paying position to Sestak if Joe were to remain on in the House, a story Sestak suddenly (and incredibly) agreed to.

Ben Stein, former Nixon speechwriter and game show host (is there a connection?) said that Sestak is lying, for no one would seriously give up a chance for the Senate for a mere honorary post. Dick Morris, former Clinton aide and now conservative talking head, said that even if it was Clinton who offered the job, and even if the job was a non-paid position, it was still "a thing of value" that could be traced back to Obama, so it was still an impeachable offense. Meanwhile, as a winking Democratic party backer pontificated on FOX that offering something to someone for something in return was simply "politics," a young (and now) Republican woman looked at her cynical opponent with contempt and then stated, "even if this were true, Barack Obama once campaigned into this camera that he would rid us of 'politics as usual,' but instead he has only mastered it."

While my heart (and dare I say "hope"?) is with the first two commentators, I fear reality is with the latter duo. For even if Obama deserved to be impeached in this suspect Sestak deal, the Democratic Senate that Barack has bought and (nearly) paid for, would never do it. For not only is this politics, but from the Roland Burris flourish ("I would never support someone Blagojevich nominated  until now") to the "Cornhusker Kick-back" to the silencing of Sestak, Obama has proved that the only thing rougher (and more Machiavellian) than Washington politics is the Chicago Way. For the pro-life readers, I know no further explanation is necessary, but for the sake of Obama's pro-choice followers, I have one more tale to tell. 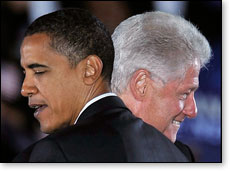 When I was young and "Independent," I witnessed a charismatic youthful-appearing politician who not only claimed compassion for the poor, but promised free health care for them if elected, and so I voted for him. But gradually I began to see he didn't really care for the poor, at least not the ones who couldn't vote, and I realized that what I mistook for compassion was really only control. I understood that our country was founded on the promises of "Life, Liberty, and the pursuit of Happiness," and that if some (through abortion) were denied "Life" (which always comes first) they would never get a chance at the other two. And if the least of us were denied Life, then Liberty became License (as in "A License to Kill') and the pursuit of Happiness merely the strong imposing their will upon the weak. So if you still cannot look upon abortion as murder (or believe it is a killing that is justified), I ask you to again examine the not-so-pretty political patterns that Obama has painted, then to get on your knees and pray that you won't be fooled again. For the only hope Obama offers is a chance in his high stakes game of Liar's Poker, and the only change from the time of my youthful independence to yours is that, instead of Bill Clinton receiving favors under the table, he is now the one giving them.