We do not seek to impose our religious views on others; we simply ask that Government not impose its values on the University when these values conflict with our religious teachings. This filing...goes beyond any debate about contraceptives. For if we concede that the Government can decide which religious organizations...[deserve] the freedom to follow...their mission, then we have begun to walk down a path that ultimately leads to the undermining of these institutions...and these organizations become the mere tools for the exercise of government power, morally subservient to the state...it will be the end of genuinely religious organizations in all but name. — Fr. John Jenkins, from his comments on the Notre Dame HHS Mandate lawsuit

Remember, oh most gracious Virgin Mary, that never was it known that anyone who ever fled to your protection, implored your help, or sought your intercession was left unaided. — from the prayer "The Memorare"

But unlike Harvard or Yale...former Christian universities that are now secular schools, Notre Dame has the weapon to combat all heresies; namely Notre Dame Herself. The modernists may have their day, but like the song says, 'ol' Notre Dame will win over all.' For the modern infidels to take control here, they would have to blow the Dame off the Dome, rip the heart (the Eucharist) out of Sacred Heart, and lastly, rock by rock, tear the Grotto apart. And legions of her sons and daughters would willingly die martyrs before they would allow that to happen. — Tom O'Toole (me!), from my 1996 article on the 100th Anniversary of the Notre Dame Grotto 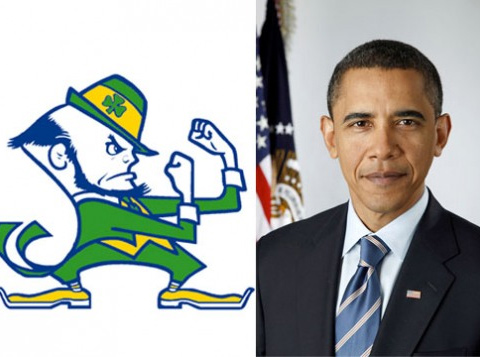 To many of the faithful, Notre Dame's daring if daunting legal challenge to the ominously evil HHS Mandate's Catholic crackdown was good news indeed, a breath of fresh air from an institution gone stale (if not sour) from Modernism. Sure, forty-two other Catholic Dioceses and organizations also sued the government at virtually the same time, but everyone from the staunchly conservative Pro-Life Action League to the religiously liberal Wall Street Journal agreed that Notre Dame's lawsuit is the "most signifigant," for whereas the always-orthodox Catholic or Franciscan University's opposition was a given, up until the eleventh hour there was much debate as to which side of the fence (if any) that mighty Notre Dame would end up on. And while there is still cause for concern at Our Lady's University (at least as long as the Rev. John Jenkins is still its president), this action gives real strength to the hope that Notre Dame is Notre Dame's once again.

Certainly, when news of Notre Dame's lawsuit first hit the net and the media cycles several weeks ago, the story struck like lightning (or perhaps like "thunder from the skies"?) to those opposed to Obama-nation Domination. Conservative Christian men who thought Notre Dame was already lost were now dancing in the streets, and orthodox Catholic mothers were once again assuring their many young children that, although the devious President Obama has indeed sought to undermine the American family's many freedoms, we needn't worry because Notre Dame, "the school of the Fighting Irish!" has promised to come to our protection. Okay, maybe the last scenario is a slight exaggeration; the news from Notre Dame has been so morally relative for so long that it is more likely the grandmother telling the good news to the one or two children of the full-time working mom who doubles as her daughter...but you get the point. Notre Dame's defense of the faith was so positive that even Father Jenkins couldn't ruin it — and believe me, he tried...

For amidst his mostly powerful summary of the lenghty University lawsuit (much of which is quoted above) Jenkins shows he's not above his old tricks by also slipping into his commentary the following nebulous nugget. For after a dynamite start to his statement, Jenkins continues, "Many of our faculty, staff and students, both Catholic and non-Catholic, have made conscientious decisions to use contraceptives. As we assert the right to follow our conscience, we respect their right to follow theirs." Commenting on Jenkins' unnecessary bow to the "conscientious objectors" of Vatican II (such as Notre Dame's own Father Richard McBrien), the Sycamore Trust, perhaps the primary alumni group promoting Notre Dame's return to Orthodoxy, explains "Father would never say this for other serious violations of moral law and Church teaching, [such as] racial discrimination," whereas Notre Dame Law Professor Gerard Bradley adds, "Father Jenkins comes perilously close to implying there is nothing objectively wrong with contraceptives."

Personally, I'd say that Jenkins' HHS stance leaves him perilously close to (once again) becoming a true Catholic. Still, if Jenkins, like the Renaissance popes, lacks the moral fiber to totally commit himself to the faith, he is also like his weak Church predecessors in that, when push comes to shove, his statement shows he will not publicly deny the Faith either. The presidents of other major Catholic universities, who have become the Luthers and Calvins, if not the "Hitlers and Stalins" (unlike Jenkins, Bishop Jenky doesn't mince words) of our generation, cannot even claim that. So while we can still only trust Jenkins as far as we can throw him — or peacefully "overthrow" him as the conservative alumni continue to pray — he finally has come to realize that HHS Secretary Kathleen Sebelius is serious when she says she is "at war against those who support" the Catholic Church's pro-life agenda, and while Jenkins may not have the guts to personally lead the fight, he no longer has the gumption to stand in the way of the loyal sons and daughters of Notre Dame who do. And, though these loyal legions would prefer this war is resolved peacefully, they are also prepared for the event (as my passage predicted) that their defense of Our Lady's University may require of them more than just prayer. Game on, Notre Dame...GAME ON!