Homosexuality refers to relations between men or between women who experience an exclusive or predominant sexual attraction toward persons of the same sex. It has taken a great variety of forms through the centuries and in different cultures. Its psychological genesis remains largely unexplained. Basing itself on Sacred Scripture, which presents homosexual acts as acts of grave depravity, tradition has always declared that "homosexual acts are intrinsically disordered." They are contrary to the natural law. They close the sexual act to the gift of life. They do not proceed from a genuine affective and sexual complementarity. Under no circumstances can they be approved. (CCC #2357) 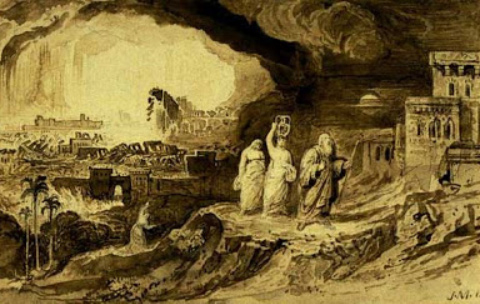 After being questioned by many (including myself) for condemning Michael Voris' documentary, "FBI (Faith Based Investigation) into Homosexuality," as erroneous, but then not giving any evidence to support this claim, former queer (her term) turned married Catholic mother of six, Melinda Selmys, went back to the blogging board and "called Voris' bluff," coming up with forty so-called errors in Voris' film. Sadly, many of these claims stretch the limits of credulity (if not veracity) and, as in the case of both of Selmys' previous two works on the subject ("How to Speak About Homosexuality" and "What I Mean By Acceptance"), raised more questions than they answered.

Part scholarly research and part knee-jerk reaction, Selmys herself admitted that many of Voris' "errors" are not actually errors at all, but merely her personal objections to Michael's style. For example, Error #6, "The entire 'history' section suffers from massive Western chauvanism. The result is a misleading and lop-sided portrayal," appears to be merely a typical feminist beef without fact, and #12, "Paranoia abounds. This is strictly speaking not a factual error, but it is an extremely problematic form of thinking," is even more problematic in that it harkens back to the original problem; Selmys is merely calling Voris names without giving reasons. As early as the third grade, students are now taught to give evidence to support their answers, and all parties concerned would have probably been better served if Selmys had made her list shorter and left such name calling off of it.

On the other hand, Selmys does give her reasons for the criticism of the scripture Voris uses, but one would be hard-pressed to find an orthodox Catholic who finds them reasonable. Of course, editing, both for context and balance, is a valid topic for the reviewer, and while many of Selmys' many suggestions for inclusion in this video seem valid, hers would have been a Lord of the Rings (uncut version) epic rather than the 94-minute documentary that Michael did. Still, her criticism "Scriptural quotations are consistently clipped in order to make them as harsh and condemning as possible, sometimes in a way that does damage to the actual text and its context," especially when she then cites "Romans 1, in particular," is peculiar. For as anyone familiar with Romans 1 can tell you, the longer you read Paul's rant against the gay Romans, the more "harsh and condemning" it becomes. "Mutual degradation of their bodies" and "unnatural relations" becomes "every form of...evil, greed and malice" and later "senseless, heartless, ruthless..." to name a few. So if Voris could be accused of anything in this case, it would be mercy rather than overkill.

But if Selmys' critique of Voris' use of "Romans" is curious, her problem with his reference to Genesis 19 – at least to the orthodox Catholic – is just crazy. "No discussion of the obvious fact," claims Selmys, "that the sexuality portrayed in Sodom was ritualized gang-rape of supernatural beings (angels), not consensual sex between human male individuals." Since, as Catholic Answers states, "[t]hroughout history, Jewish and Christian scholars have recognized that one of the chief sins involved in God's destruction of Sodom was its people's homosexual behavior," perhaps this novel interpretation of the passage can be attributed to the six or so homosexuals on the strange New Evangelization staff that Selmys is a part of and that Voris, not surprisingly is not. Notwithstanding the fact that the Church fathers have consistently taught the (main) sin of Sodom was homosexuality and not rape, if this "gang-rape" teaching was current Catholic theology, would not the Catholic Catechism referenced Genesis 19 in support of section #2356, which has to do with rape, rather than section #2357, which deals with homosexuality? Which makes me wonder what Selmys' real problem is anyway...

For when she critiques Voris' film, "It is strongly implied that Ancient Greece is the only historical society in which homosexual relations were socially accepted in order to develop the inference that this is highly abnormal. Actually, they were widely accepted during certain historical periods in Japan, China, certain parts of India, the Arab world (there was a particularly fertile period of homoerotic Muslim poetry and spiritually [sic] during the late Middle Ages), pre-colonial America...etc. etc," does she really disagree with his point that throughout history, unnatural sexual relationships were in the minority? Or is she merely making this list to make a plug for "homoerotic Muslim poetry," and those friends of hers who enjoy it? And when she complains, "Voris conflates 'sexual orienatation' [sic] with 'chosen sexual behaviour' in order to try to deny any legitimate affinity between the gay rights movement and the civil rights movement. This is very poor argumentation: it's a classic example of redefining the terms in mid-argument so that they will be better suited to making your point," is she really upset about Voris' choice of words, or does part of her think that this "affinity" is legit?

Surely Selmys knows that gays in America have all the same "rights" as straights with one exception; and those who now use this gay rights vs. civil rights argument have their eyes on that one prize, namely gay "marriage." But as Selmys professes to follow CCC #2357 that calls homosexual acts "intrinsically disordered," a "grave depravity," could she be arguing for gay couples living together in a chaste relationship? Certainly, this seems highly unlikely, given the fact that when she broke off her lesbian relationship to become Catholic and her girlfriend suggested it, Selmys replied this was "impractical" and "wouldn't work." Or is she throwing this diabolical bone of gay marriage to her non-Catholic friends in some Machiavellian attempt to one day win them over?

Selmys claimed in her rebuttal to my first article on her that I was suggesting that she should not write based on the fact she wasn't perfect. I replied my criticism was instead that while she was advertising herself as a Catholic, she, by mixing Catholic teaching and secular logic, was really playing with fire. Melinda, you argue with Voris' explanation that "'One can conclude that it's their [gays'] behaviour that's causing the problem,' the problem being elevated rates of mental illness in homosexuals" (from Voris Error #4) is simplistic and inconclusive. But did not St. Paul, who said that unnatural relations developed into senselessness and heartlessness, argue the same thing?

Could it be that your former "confused...suicidal, self-harming," self was caused to some, if not a large degree, by your homosexual relations? It is wonderful that you are a Catholic wife and mother now, and as a Catholic husband and father I couldn't be more happy that God has given you these graces. But as your "conservative" Catholic friend who likes to write a bit himself, I pray that, for the sake of your many devoted readers, your past demons (and present anger at Voris) do not begin to creep into your present apostolate and poison it forever.