August 14, 2010
On January 9, 2009, the Manchurian Candidate was elevated to President of the United States of America. At the same time, he assumed the office of Commander in Chief of all U.S. land, sea and air forces.

The man, whom hardly any American knew anything about, became the 44th President. For those of the liberal persuasion, it seemed that all that mattered was that Barack Hussein Obama II was black — or at least half-black. For liberals, this was the defining moment in America. 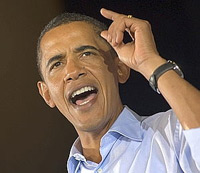 At last, liberal white guilt was assuaged. This was to be the post-racist America — a time of racial healing and the end of divisiveness. Here then was the new Camelot where an attractive, young, energetic president would take America forward into a golden age — or so they thought. How bitter the reality as America sinks into depression — emotionally, financially, politically and socially.

Starting in early 2009, just weeks after Obama's consecration, his administration began a colossal spending spree, unprecedented in U.S. history. Ironically titled the American Recovery and Reinvestment Act, the aim was to spend our way out of recession. But the opposite occurred. The recession deepened and has become prolonged, perhaps for years to come.

An explosion of employment in the government sector and commensurate shrinkage of the private sector slowly but surely is snuffing out the dynamo that has given America the engine of growth that the world envied. Small business, which produces wealth and private employment, is threatened and squeezed while government payrolls — a sector which produces very little, if anything — expands exponentially. There is a method to this madness as hundreds of thousands more Democrat voters are thus hatched.

Obama's vast stimulus program, which was guaranteed to reduce unemployment to 7%, led instead to a surge that currently threatens to exceed 9.5% and beyond. And next January, 2010, expect a tsunami of higher income and corporate taxes. Things are becoming so desperate that one hears rumors of a tax on savings deposits that may be enacted to force folks to spend what's left of their savings in order to revive the economy.

The Obama economic solution is rapidly bankrupting America. Socialist and Marxist ideology is rapidly replacing market freedoms. Prosperity is dying on the golden bough that is — or was — America.

President Obama has come from obscurity to a position of ultimate power and the world is a far more dangerous place as a result.

In the 20th century, America prospered while the dead hand of socialism dragged numerous Communist nation states and their populations down in a spiral of poverty and apathy. The dynamo of liberty, with all its inherent opportunities for personal ambition and growth, was lacking among the Communist regimes.

In stark contrast, the West was enjoying prosperity, innovation, and the boundless opportunities that freedom and liberty confer. The more freedoms a nation secures, the higher growth rate it enjoys.

But the new president of America, Barack Obama, is cut from a different cloth. His mentors were ideologues who saw the collective as the preferred solution for society. Obama surrounded himself with America haters, Marxists, radicals of every stripe, who despised capitalism and who saw in America a land of imperialists and predatory colonialists. Thus Obama has toured the world apologizing for America's perceived wrongs while despots and tyrants snicker.

Barack Hussein Obama is, in many respects, a man of mystery. He claims he was born in Hawaii, yet some question his place of birth; there are indications he may have been born in Kenya. There is certainly no doubt of his formative years being spent in Indonesia, the most populous Muslim nation. Some point to his early education in madrassas — Muslim schools where the overwhelming emphasis is on learning by rote passages from the Koran.

Roger Kimball, writing in his blog, Roger's Rules, in Pagamasmedia.com on August 12, 2009, questions Obama's loyalties. He writes, in part, as follows:

" ... thinking about the President's obsequiousness to a Saudi prince, his exclusion of such words as "jihad" and "Islamo-fascism" from the library of permissible words, I wonder exactly where his loyalty lies. Not for the first time over the last 18 months or so, I ask myself: "So here's President Obama: what, exactly, is he President of."

"The United States, silly," you say.

"Well, that's what it says at www.whitehouse.gov. But is he really the President of the United States?"

"Is Barack Hussein Obama President of the United States in any of those senses? Again, I don't dispute his title. I just wonder what, in his case, it means.

"Never before, I believe, have we had a president whose tenure is surrounded by this nimbus of disaffection. You might have thought Jimmy Carter was a sanctimonious nincompoop. You never doubted that he was an American, by which I mean not just that he was a citizen but that his essential identification was with this country.

"Can the same be said of Obama? Can it?"

Particularly troubling is Obama's apparent paralysis in dealing with the Islamic Republic of Iran's feverish rush to acquire a nuclear bomb with the express purpose of exterminating Israel. Suspicion about Obama's Muslim background cannot be dismissed, for his seeming disinclination to truly act effectively against the military ambitions of the Iranian mullahs and Mahmoud Ahmadinejad is bound to arouse legitimate concerns.

Obama's boorish return of the bust of Winston Churchill — a gift from the British people, which had adorned the White House for decades — to Britain's Gordon Brown was an early indication of Obama's dislike of Britain. His disgraceful treatment of Israeli Prime Minister Netanyahu at the White House earlier this year should have been an eye-opener for many. His later apparent change of heart towards Binyamin Netanyahu, many believe, has more to do with the upcoming November Congressional elections than any warming towards embattled Israel's cause.

Israel, perhaps the most loyal ally of the United States — certainly in its voting record on behalf of the U.S. in the UN and in providing a wealth of vital intelligence about nefarious Arab regimes and Islamic terror organizations — stands for the same freedoms as the United States.

In contrast to the secular and Islamic fundamentalists and tyrants who rule the Arab and Iranian regimes, Israel and the United States provide a better model to the poverty, oppression and misery that pervade the peoples of the Middle East.

That is one reason, beyond the desire to win the world for Islam, why the jihadists and their state-sponsored leaders hate America, Israel and other western democracies and wish to do away with them through violence and the infiltration of stealth Sharia law.

Barack Hussein Obama is therefore a troubling incumbent in the White House in these perilous times. It is all the more reason why it is so necessary — perhaps more than at any other time in America's history — that the Democrat Congress must be replaced with a Republican and hopefully far more conservative majority in the House and Senate.

Obama will still have executive powers, but with luck his wings may be sufficiently clipped to save the Republic and give our children and grandchildren a nation that can still be recognized as the United States of America.