Jen Shroder
Gun Rights: When do we pick up arms and fight?

January 17, 2013
It was 2 a.m., raining hard and my Dolphin motorhome was leaking. I was a college kid with 18 hour days of school, work and racquetball, so it made sense to live in a motor home. It worked out well until the dripping began, so I found shelter at a strangely lit, abandoned gas station. I climbed on top of my motorhome equipped with a tube of silicone to fix the leak. There was a busy street in the distance, I felt safe to think I was visible to passing motorists but I grabbed my grandpa's old Remington handgun just the same. Half way through my repair, a man appeared under the light below me and approached my ladder with a menacing look in his eye. I told him to back off but he kept coming. I pulled out my gun, aimed right at him and repeated my orders. He froze and then quickly slinked off into the dark. 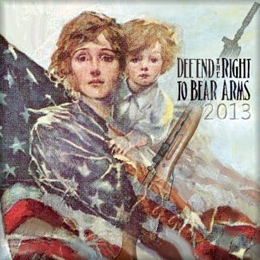 I read an article claiming weapons are rarely used in defense. On the contrary, it happens all the time. Was my story newsworthy? Would the camera crews roll up, microphones in hand? Did the world want to know exactly how close he came, how I held my gun and the puddle he left behind? Oh what a fascinating puddle, let's splash THAT all over the six o'clock news. No, my story is common, no blood, no headlines, but without God and my gun, I'm fairly certain I'd be just another missing person or dead body turning up. How many women were spared such an ending but didn't report it?

Another time I found myself walking a dark street, alone in a big city late at night, looking for a restaurant to catch up with my buddies. We were all unfamiliar with the area as we played racquetball tournaments all over the state. My last match went late into the night so I was trying to catch up to friends. Directions were hasty, the road was closed for construction, but I could see the restaurant a block away so I parked and walked past the equipment. A couple of men came out of the shadows and started trailing me. I stuck my hand in my purse and gripped the handle of my gun, was about to pull it but they seemed to read the move and suddenly stopped, muttered to each other and turned around. Criminals seem to be very astute at measuring their prey.

Is this newsworthy? No, but just because it's not sensational doesn't mean it doesn't happen. We live in a dangerous world with a false sense of security. The news will highlight ONE case of a missing person when there are tens of thousands missing under criminal or suspicious circumstances. Home invasions seem to be on the rise, but how would we know if we depend on the news?

"No free man shall ever be debarred the use of arms. The strongest reason for the people to retain the right to keep and bear arms is, as a last resort, to protect themselves against tyranny in government" – Thomas Jefferson, 1 Thomas Jefferson Papers, 334

"The constitutions of most of our States assert that all power is inherent in the people; that... it is their right and duty to be at all times armed." – Thomas Jefferson to John Cartwright, 1824. ME 16:45

"The best we can hope for concerning the people at large is that they be properly armed." – Alexander Hamilton, The Federalist Papers at 184-188

As this is our forefather's intent, then we should be able to attain as much artillery as our military! As our legislators argue over what new restrictions to impose, I demand LESS! Taking guns away from law-abiding citizens is only going to VICTIMIZE law abiding citizens. When someone is shooting at you, you do not throw down your guns!

Anti-gun politicians naively ask, "What does anyone need automatic guns for?" Do they really not realize the affront our government has become? The 2nd Amendment is already infringed, Pelosi laughs at the thought of adhering to the Constitution, Obama calls it a "negative charter of liberties" as he positions his executive pen, and an awakening America remembers what happens in emerging communist countries after people's guns are taken away.

If we don't need ID to vote, why do we need ID to purchase guns? If $6 to provide proof of citizenship impedes a person's right to vote, then why doesn't gun fees and licenses impede their right to bear arms? In fact, if we MUST provide Sandra Fluke her condoms, then I demand our government provide my ammo!

I urge you, America, do not fight. We may have every legal reason to pick up arms and fight, but be at peace. When our founding fathers prayed and beseeched God for help, there was a future for America, a purpose. For generations we have been a Light on the hill, we have blanketed the world with the Gospel of Jesus Christ. No other nation has sent out as many missionaries and charities in His name as America has. God had a purpose for us and gave us the opportunity to serve His Kingdom. But what has America become? For what purpose are we asking to be blessed? That Christians in other nations would continue to be brutally slaughtered as we fawn over Kim Kardashian? Slave markets, torture, the blood of the saints continually spilled while we, in America, care nothing except for our own pleasure? We are told to tolerate, our schools write in their standards to teach our children to compromise on everything, that there is no right or wrong, no good or bad, we throw down all understanding of God's heavenly Kingdom to trample it with secular humanism, applauding multiculturalists like Karen Armstrong who writes that "religion is manmade" in our textbooks and has set out to prove conclusively that Christianity is "bonkers" while applauding Islam. We pollute our children with made up fantasies that we evolved from primordial goo randomly, insist they repeat it as fact, warp their minds to atheist beliefs and then ask that the God of Abraham, Isaac and Jacob bless our cause to regain this perversion called freedom? That modern America can continue on this path of inflicting the butcher of the unborn worldwide? That we can continue to spread pornography, homosexuality, Christian persecution in all four directions around the globe? What America has become in the past ten or twenty years, is that what we are asking God to uphold?

God told us through the prophets what is to come that we would believe and many of us have recognized the slow turn of the wheels which have begun. I believe we are being divided by the angels as they separate the wheat from the tares or weeds, indeed as they bundle the weeds for (future tense) burning (Matthew 13:30), but as is common in the Bible, it happens much more slowly than we expect. Did you wonder how we all seem to be so blind and deaf to each other's point of view, wonder how the other side cannot see what is obvious? I contend, this is why! They are being blinded as their time runs out, the separation is becoming distinct, depraved minds are falling deeper into their own depravity and they can't even comprehend they are falling.

And so our nation has fallen into decline. It is like we are all in a boat and certain ones among us insisted on boring holes in the bottom of that boat. We will all pay the consequences as we sink but God will not forget His own. When hunger comes, when chaos and thieving and unmitigated murder begins, we are to defend our families, our guns will be of use in the face of chaos, we are to have a sword! But just as there was a purpose for Christ laying down His life, when the law against Christians becomes the law of the land, we are to survive the chaos that we can then lay down our lives and give glory to God. For that we will be persecuted and killed. Some will wonder, "Where is God" but God is right here! Submit! Not to evil, but to God! Recognize that the end times are and will be upside down, that evil will be called good and good, evil; that much of what God told us is happening slowly. But have faith! Let not your heart be troubled for we were told of these things!

We will not win America back. Our choices will be: will we pick up our cross and follow Him or will we pick up arms and attempt to fight for a continuation of the liberal perversion of freedom, leaving a trail of blood behind us? Will we lay down our lives in the name of Christ? Saints, I think America has run it's course, and praise God for His blessing upon our nation that has brought so many worldwide to His Kingdom. Many of us are not ready to stop fighting for the cause, but I urge you, consider what that cause today truly is.

I will not fight to finance worldwide abortion mills, homosexuality, pedophilia, pornography, child slavery and everything that evil men have twisted "freedom" to mean. We have been corrupted from within and a darkness is coming, evil will appear to prevail but it will not succeed. We cannot fight this one world government that has already been laid out. We need to realize that it was foretold and keep faith. Hold your lamp high that all around you can see because your neighbors will need help in the coming days.

"The Spirit Himself bears witness with our spirit that we are children of God, and if children, then heirs – heirs of God and joint heirs with Christ, if indeed we suffer with Him, that we may also be glorified together. For I consider that the sufferings of this present time are not worthy to be compared with the glory which shall be revealed in us. For the earnest expectation of the creation eagerly waits for the revealing of the sons of God." (Romans 8)