Jen Shroder
Jesus, three days and three nights in the heart of the earth, not tomb

"In the heart of the earth" is the wickedness of man's heart, as explained in the parable of the four soils (Mark 4:15, Matt 13). Man's heart is exceedingly wicked (Jeremiah 17:9) and Jesus Christ was immersed in it from the moment He was "betrayed into the hands of men" until He rose again at the dawn of the third day. The Bible clearly says so. 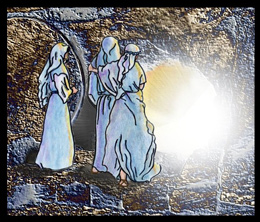 On the night He was betrayed, the very words after healing the servant's ear, Jesus said to those arresting Him:

Jesus pointed out that it had begun. At that moment, Jesus BECAME SIN and the suffering began:

What would be a greater shock to His system than becoming our sins, that He could then be presented as the sacrifice in perfection, which Scriptures show is all part of the three day and three night time frame?

ALL of the Scriptures add up to this. Twelve verses describe the three days and three nights and they all include the betrayal or His suffering. Below are three examples.

1. "Saying, the Son of man must suffer many things, and be rejected of the elders and chief priests and scribes, and be slain, and be raised the third day." (Luke 9:22)

2. "Jesus said unto them, the Son of man shall be betrayed into the hands of man; and they shall kill Him, and the third day He shall be raised again." (Matthew 17:22)

As Scriptures indicate, Jesus became sin on the night He was betrayed, included suffering, the crucifixion, death and resurrection, totaling three days and three nights.

Jesus, as the sacrificial lamb, was without blemish on the night He was betrayed:

"[We were redeemed]... with the precious blood of Christ, as of a lamb without blemish and without spot." (1 Peter 1:19)

Of course this refers to Jesus being sinless, yet the lamb was to be perfect in every way. The precious blood could not flow or be wasted before the sacrifice began. The blood began to flow on the night He was betrayed when Christ entered "the heart of the earth." When the disciples asked for an explanation of the four soils (where the earth is explained as the hearts of men), Jesus asked, "Know you not this parable? How then will you know all parables?" (Mk 4:13)

"He was wounded for our transgressions, He was bruised for our iniquities, the chastisement of our peace [prosperity, welfare] was upon Him, and by His stripes we are healed" (Isaiah 53:5)

If the sign that Jesus gave was completed only by His death, time in the grave and resurrection, how was payment made earlier when He was wounded, bruised and given stripes (scourged)? Was He beaten and bleeding before He became sin? Were the bruises and bleeding for nothing? No! Was the Lamb delivered for the sacrifice already bloodied and torn? No!

Christ had to become sin before payment could begin or the blood would be wasted. The chastisement "was upon Him." The miracle of Christ's redemption began on Thursday night when Christ became sin, the night He was betrayed, immersed in our sins and delivered unto man. THIS was the "heart of the earth" that Jesus spoke of. He never said it was the tomb, for to be separated from God as He became sin would be far more shocking to His system than mere death. Before the first drop of His precious blood, Jesus suffered far more than physical death, He became sin which separated Him from His Father, in the heart of the earth, in the belly of the whale.

Verses that show sin separates us from God:

"But your iniquities have separated you from your God, and your sins have hidden His face from you, that He will not hear." (Isaiah 59:2)

Beloved, do not let anyone sow seeds of doubt within you. They do not understand because they do not know the Scriptures. The Bible has always been reliable and it will always be. As man continually changes and rewrites his best guess to impress, the Bible continues as the solid anchor in truth.

Man continually looks back and tries to manipulate facts to appear wise and yet fails. God looked forward, wrote it down and gets it right every time, continuing in truth today as prophesies unfold in the news.

Jesus told us that we would be hated, He said that He tells us these things that we would not lose peace. So as the world rages over gay marriage, as false christs come forth and attempt to rewrite what God said, have no fear. God knows who you are and where your heart is. He will not leave or forsake you. Hang on to what you have and do your best to protect your children. Pity those who have caused your little ones to stumble, God knows who they are and has written that it would be better if they had never been born.

For many more Scriptures confirming the above, along with many interesting sidenotes, see http://www.blessedcause.org/BlessedCause%20Exclusives/The%20Sign%20of%20Jonah.htm