Jen Shroder
Marine mom letter to Libs: "What war is"

I'm a Marine mom, and I am sick and tired of hearing your view that we don't need a military, that it's fine to butcher babies in abortion mills because our troops are out there killing civilians. What a load of hogwash! Our troops DO NOT TARGET CIVILIANS and often can't fire back when they are fired upon! Any liberal that is this blind obviously uses glue for mascara, for the love of Pete, open your eyes! 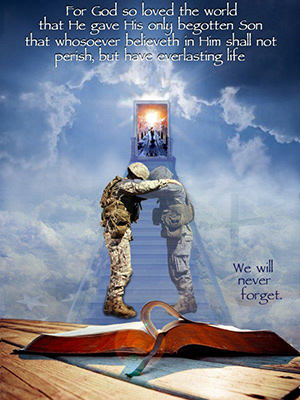 These wars are not about Americans selfishly fighting for our own children while murdering everyone else's, though if you would stop aborting your own maybe someone would be around to pay for your health care other than MY son who signed up to defend you. He doesn't do it so you can live while other people die, he does it because our enemies have a mandate to make all the world Islam, or communist, anything other than Judeo-Christian which in case you didn't notice, is the FOUNDATION OF FREEDOM.

Some of our sons and daughters are SO GRATEFUL for the abundant lives that we have, that they selflessly volunteered to give back and defend us. Meanwhile your educrats have been dominating our public schools and force feeding our children the idea that all religion is bad. I'll agree there are some bad religions, like the one that every REAL historian knows has a mandate to present Allah as a god of peace but if refused, KILL all who oppose him. HISTORY has repeated this through the ages and is even playing out in other countries TODAY where every infidel to Islam is butchered and yet you insist that Islam is peaceful.

A devout Muslim will follow Mohammad who BEHEADED EVERYONE IN HIS PATH (Banu Qurayza). A devout Christian will suffer abuse and remind him or herself that Christ said to love even those that hate us. WHERE are there Scriptures instructing Christians to kill infidels? THERE AREN'T ANY! If it wasn't for Christians, if it wasn't for those objectionable Crusades, we would all be Muslims by now. Except WE wouldn't be Muslims, we never would have existed, which judging from the abortion mills would be just fine with you. Let's just abort our culture, let's fall on our own swords and give preference to Saudis to enter the country...OH WAIT! We already do that, so why are jihadists bombing Boston again? Why did they kill and quite possibly torture people in Benghazi? Why did they behead Daniel Pearl and Paul Johnson? Why the World Trade Center, the Khobar Towers, US military barracks, the USS Cole, the 1996 Olympic games, why?

Because you don't bow down to Allah, that's why. You don't accept Sharia law and you dare to show your elbows, that's why. You rant about Christians because we agree with God that our anatomical plumbing is not the rec room and we don't want our children taught that it is. In fact our children's bodies are meant to be sanctuaries until marriage, but YOU demand that we teach them the most profane practices while demonizing priests who were found to be pedophiles. The problem is the priests that are guilty ARE PEDOPHILES not that they are priests! Did you trash the sport of football because Sandusky was found out to be a pedophile? NO! So why do you go after the Church because of wolves dressed in sheep's clothing? The problem is they were PEDOPHILES, but you defend pedophiles and abortionists while throwing around condoms in classrooms and then blame parents because our children misbehave. HYPOCRITS!

There are people in this world that want to destroy America and it's not because we keep our thermostats up, it's because they want you to worship their god and obey his laws! You whine about Christian morals and restrictions, demonize our troops as they protect us and refuse to look at who is banging at the gates. Why don't you send out a gay welcome parade and see how far you get? FREEDOM CAME FROM GOD because He wanted you to have a choice! But you liberal atheists have taken freedom and created a cesspool of it, full of disease and death. Meanwhile secular liberal educrats are getting louder about children belonging to the village because you keep butchering your own children and destroying your own base. HYPOCRITS!

So my son is out there defending his country while liberals mock, ridicule and tear down everything that was once good and righteous and holy in this nation. You seem to be sick with some form of self-loathing, both of self and country. (Romans 1:28) And this is why I write today. Today I learned that 19 of our own have been killed in the last week. Seven were killed on Friday. Every Marine mom and dad probably feel like they have ice in their veins as they think of their own sons, as we grieve and pray for the families of those that made the ultimate sacrifice. They fought for freedom. They voluntarily offered their lives that you and I could still choose.

Time is growing short. Some have hope that America will turn around but I see too many prophecies leaping off of the pages in today's news. I have seen America cry out to God in crisis, only to run right back to other gods. To the liberal, secular humanist socialist American, look at what you've created. Realize our depths of depravity and for your own sake, turn around. Christians are suffering and dying all over the world that you could have more time. The God of Abraham, Isaac and Jacob loves you, so much that He came down and died for you, that you might rise again in Him. Our way of life is dying, not because of the Muslim but because of the secular humanist demanding that we all play in the darkness. Our nation is dying but you don't have to. Turn around. There is trouble on the horizon but look up. Our heroes have been dying for you even now. Come to Christ, He has been waiting for you, His saints have been dying for you, your time is almost out, come.