This (non-consecutive) series explores the danger that communism (in whatever form or cover) is alive and well around the world, albeit without the top-down direction of the old Soviet Empire.

In this installment, we are saying Communism (with a large or small "c") not only remains a threat, but is about to take one giant step toward total world domination.

If all of this sounds far-fetched, consider that people who have experienced firsthand the fangs-bearing menace of Communism (Czech Republic President Vaclav Klaus, for example) see a remarkable resemblance between what happened in their own experiences and what is happening here and throughout the world.

That is not to say that with the collapse of the Soviet Empire, the Communist Party-USA shut down its headquarters and announced to the world, "Out of Business...Now Under the new management of Greenpeace, the Earth Liberation Front, the Sierra Club, et al." Nothing as blatant and orderly as that. In a lot of ways, the switch from Red to Green quite naturally "just happened."

Into this whole Red/Green equation, one must consider that Communist propaganda by itself never would have wormed its way into our media, entertainment, and academia without the help of "crypto-communists" (with a small "c")  i.e., those who never joined the Communist Party, or who may never even have joined a Communist front.

However, their actions and pronouncements have provided reasonable suspicion that in their heart of hearts they looked to the old Soviet Union as the world force that would pressure America and other Western Nations into a more "egalitarian" society  enforced from the top down  the "workers' paradise." You could hear it in their "moral equivalence" arguments when discussing the Soviet Union  damning America, but rarely  if ever  condemning the huge prison that was the Soviet empire. In fact, to this day, they hate Ronald Reagan precisely because he brought down that "evil empire." This is what the late Jeane Kirkpatrick correctly saw as the "blame America first" crowd. 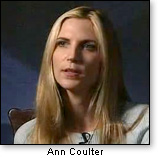 Several years ago, Ann Coulter wrote about this phenomenon in her book Treason. Ann caught hell for that  while the book's lofty position on the New York Times best-seller list suggested she had hit intellectual pay-dirt. Normal people do in fact instinctively scratch their heads and wonder at the contortions supposedly responsible leaders display in order to excuse actions and policies that defy common sense and clearly inflict harm on America's best interest.

From Red to Green

It has been obvious for some time that the "crypto-communists" have found refuge and a (more "respectable") home in the Green movement. What better cover for anti-freedom anti-free market mischief than to say something to the effect of  "Nobody here but us tree-huggers." Has anyone ever wondered why the "greenies" rarely raise the question of carbon footprints left by big government itself (unless, of course, it's the military, which they instinctively loathe and despise)? It is not in their DNA. It's the private sector and its concomitant free markets that are always the target of communists, crypto or otherwise.

From December 7 to December 18  when many Americans will be focused on preparing for the Christmas holidays, the nations of the world will be gathered in Copenhagen for the United Nations Climate Change Conference. Lord Christopher Monckton  at one time a science adviser to British Prime Minister Margaret Thatcher  has charged the real aim of this "Kyoto-2" treaty is to use the "Global Warming" hoax to begin the preparations for one-world government.

You can be certain that a world regime  if it materializes  will fulfill the decades-long desires of communists worldwide to impose what the Washington Post has oxymoronically defined  in another context  as "populist authoritarianism."

On October 23, Lord Monckton appeared at a 40th Anniversary celebration of Accuracy in Media. I asked a panel on which he appeared if it is true  to simplify  that the spirit of the Communist movement had found a comfort zone in "environmentalism." The panelists, including the distinguished gentleman from Great Britain, did not dispute the notion.

Lord Monckton a few days earlier had sounded the warning at a forum in Minnesota. Merely quoting a few parts of those concluding remarks would not do justice to them. Here is what he outlined:

What it [the treaty] says is this: that a world government is going to be created. The word "government" actually appears as the first of the three purposes of the new entity.

The third purpose of this new entity  this government  is enforcement.

How many of you think that the word "election" or "democracy" or "vote" or "ballot" occurs anywhere in the 200 pages in that treaty? Quite right, it doesn't appear once.

So at last, communists piled out of the Berlin Wall and into the environmental movement and took over Greenpeace so that my friends who founded it left within a year because they [the communists] had captured it.

Now, the apotheosis is at hand. They are about to impose a communist world government on the world. You have a president who has very strong sympathies with that point of view, he's going to sign. He'll sign anything, he's a Nobel Peace Prize [recipient], of course he's going to sign.

And the trouble is this: If that treaty is signed, your Constitution says that it takes precedence over your Constitution. You can't [resign] from that treaty unless you get the agreement from all the other state parties, and because you'll be the biggest paying country, they're not going to let you out.

So thank you, America. You were the beacon of freedom for the world. It is a privilege merely to stand on this soil of freedom while it is still free. But in the next few weeks, unless you stop it, your president will sign your freedom, your democracy, and your prosperity away forever  and neither you nor any subsequent government you may elect will have any power whatsoever to take it back again.

That is how serious it is. I've read the treaty  I've seen this stuff about government and climate debt and enforcement. They are going to do this to you whether you like it or not.

But I think it is here  here in your great nation which I so love  and I so admire  It is here that perhaps at this eleventh hour  at the 59th minute and 59th second  you will rise up and you will stop your president from signing that dreadful treaty  that purposeless treaty, for there is no problem with the climate, and even if there were, economically, there is nothing we can do about it.

So I end by saying to you the words that Winston Churchill addressed to your president in the darkest hour before the dawn of freedom in the Second World War. He quoted from your great poet Longfellow:

"Sail on, you ship of state. Sail on, oh union strong and great. Humanity, with all its fears  with all the hopes of future years is hanging breathlessly on thy fate."

This looks like an issue that would prompt an uprising so strong as to make the Tea Party movement look like a mere anti-establishment nuisance  or would make last summer's Townhall meetings appear relatively serene.

The out-and-out, face-to-face crackdown won't happen right away. This is something that will come in steps until "they" are satisfied you and I are totally weak and defenseless. It's like the old metaphor of the frog whose fate is sealed as he jumps into cold water and doesn't notice it is slowly getting warmer until by the time it is boiling, it is too late to be saved.

A vision of the iron fist of enforcement is something we used to assume was relegated to George Orwell novels (along with phrases describing the exact opposite of reality  aka health care "reform"). It is frightening. The Obama administration is already chockablock with Maoists and Marxists who have said in the plain English language they intend to run our media, dictate our lives, and see to it that our lifestyles conform to their "politically correct" vision.

Put all this on the world stage  in combination with worldwide Communist dictatorships only too willing to collaborate with terrorists  and how long is it before the strong arm of enforcement comes to Main Street of Middle America? Once a Communist world government takes over under cover of paying our "climate debt," where then is the counterweight to those who  when the opportune moment arrives  would charge down Main Street USA to send dissidents off to something resembling the old Soviet gulag or Nazi concentration camp?

Where you come in

Time is short. In terms of resources, the organizing skills of Joe and Jane Six-Pack can't begin to match the endless flow of dollars poured into the onward march of the World Government machine by billionaire George Soros and others of his ilk. But their sheer love of country and the patriotic fervor of most Americans can balance the scales.

Let us review Article 2, Section 2, of the Constitution  and remember, the founders who wrote that brilliant document wanted you to have the right to own property  the very cornerstone of your freedom. It says the president "shall have the Power, by and with the Advice and Consent of the Senate, to make Treaties, provided two thirds of the Senators present concur."

President Obama hopes to get around this by sending Senate Foreign Relations Committee Chairman John Kerry to discuss with UN officials what he believes will fly with 67 members of the 100-member U.S. Senate. You can read that as saying Kerry  rejected by the voters in his 2004 presidential bid  will try to scheme (and the senator is a very clever schemer) a way to bamboozle two-thirds of the Senate. 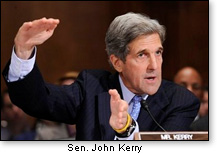 The whole idea of sending Senator Kerry overseas to plot with international bureaucrats as to how to avoid a public relations disaster with the American people who might view the treaty as not in their best interests  smells of a breach of the separation of powers anyway. But if President Obama is going to do that, and wants ensure the treaty is not anti-American, he would also send Oklahoma Senator Jim Inhofe  ranking member of Environment and Public Works  and/or South Carolina Senator Jim DeMint, a member of Kerry's Foreign Relations panel. All it takes is 34 senators to block this turkey.

There is no getting around it. If Mr. Obama dares to sign this treaty and then uses whatever window-dressing Senator Kerry brings home to ram it through, the president should face impeachment proceedings. One can argue he's already pushing unconstitutional measures on Health "Care" and Cap-and-Trade. These (especially the latter) would fit the world "Climate Debt" regime like a glove. But the prospect of actual official world domination could unleash the definitive retribution on the part of Middle America.

Rush Limbaugh said on Fox News Sunday that such retribution would likely come at the ballot box in 2010, especially if the Health Care diktat actually passes. He is right. The question is whether it will be too late, or as Lord Monckton put it  "and neither you nor any subsequent government you may elect will have any power whatsoever to take [your freedom, your democracy, and your prosperity] back again."

What is called for here is a popular peaceful, but emphatic, uprising in 2009, one that goes beyond "throwing the bums out." This time it is necessary to galvanize normal Middle Americans now before the "bums" get to us first.