May 28, 2012
It has been a century since Woodrow Wilson reportedly opined that young boys should grow up to be as unlike their fathers as possible. Whether he worded it exactly that way, our 28th president surely pursued the goal, both as educator and as politician. 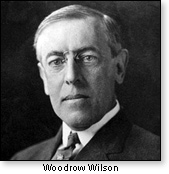 Not that his era was the first to witness a challenge to parents' prerogative. However, the early 20th century "progressive movement" (of which Wilson was a part) did offer up the most open manifestation of that attitude in American official circles up to that moment in history.

In our own time, Hillary Clinton has channeled such Wilsonianism into the high-sounding It Takes a Village, which a few years ago became a bestselling book viewed by many as suggesting the "village" (not the parent) as best arbiter of what is best for one's children.

History is replete with examples of government that seeks to acquire more power by making parents less important or perhaps irrelevant in children's lives. That creates an opening for the all-knowing state to mold the young minds for the future. The old familiar story has played out in tyrannies the world over. Though many "have seen this movie before," those who push the anti-parent agenda — on whatever pretext — are always with us.

Fortunately, a credible coordinated pushback to such mischief is emerging. A Constitutional Amendment has been introduced in the Senate that hopefully will light the fire of parental rebellion under establishment arrogance on the issue.

Co-authored by South Carolina Senators Jim DeMint and Lindsey Graham, the desired addition to our Constitution reads as follows: 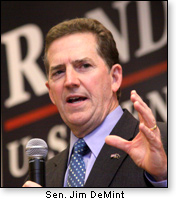 Section 1. The Liberty of parents to direct the up-bringing, education, and care of their children is a fundamental right.

Section 2. Neither the United States nor any State shall infringe this right without demonstrating that its governmental interest, as applied to the person, is of the highest order and not otherwise served.

Section 3. This article shall not be construed to apply to parental action or decision that would end life.

Section 4. No treaty may be adopted nor shall any source of international law be employed to supersede, modify, interpret, or apply to the rights guaranteed by this article.

A constitutional amendment proposed in Congress must achieve two-thirds approval of both the House and Senate. Following that, it must be ratified by three-fourths of the states. This process does not require any legal input from the Executive branch of government. The president has no official right to originate, veto, or affix his signature in any step toward ultimate ratification.

One has to appreciate that the Founding Fathers anticipated that future chief executives — being creatures of human nature — would be vulnerable to the old verity that "power corrupts and absolute power corrupts absolutely." The president's absence of involvement in the amendment procedure was seen as one way of avoiding such over-reach.

The DeMint-Graham amendment has two goals: 1 — To faithfully translate the traditional Supreme Court standard for parental rights from an implied right into an actual, clearly spelled out textual part of the Constitution. And 2 — To prevent international law from supplanting American law on the subject of parents and children. 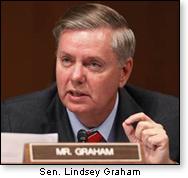 Backers of DeMint/Graham have been stirred to action by recent trends that clearly pose a threat to parental rights. Specific constitutional protections are seen as the logical remedy. At the time of our founding document, its authors never imagined an approach to government which would intrude on the day-to-day decisions of parents on behalf of their children.

In the 21st century, however, we have seen multiple instances where government seeks to intervene in family guidance for the children without any indication that the parental judgment would be harmful.

Example: A father took his 13-year old son to a doctor out of concern for the boy's drug interactions. In raising the possibility of illegal drug use by the son, the doctor asked the father permission to test the teenager. After the test, the doctor said he was not allowed to tell the father of test results because of federal Health and Human Services (HHS) regulations.

(This column, in a previous incarnation, warned of those HIPAA regulations when they were formulated at HHS in the 2001-2002 period. Those of us who expressed such concerns were given the brush-off. The irony in this case is that privacy concerns may have resulted in challenges to the right of the parent to have information necessary to guide his child. It seems that if government doesn't butt into your life in one way, another path to that same goal can be utilized.)

In 2010 in this space, we cited a hard core card-carrying Communist whose "history" texts have been spoon-fed our children from kindergarten through higher ed. Parental objections to such Hate America indoctrination of their kids (on the parents' tax and/or tuition dollars) have been ignored or rudely rejected. (See this column August 9, 2010, and September 6, 2010)

And these are not isolated cases. Backers of the Parental Rights Amendment have been building huge files containing hundreds of other instances where the hand of government has intervened between parent and child in medicine, education, religious training, and other matters of everyday decisions by parents for their offspring.

In the absence of specific guarantees in the Constitution, the courts are all over the lot on this question. In the 2000 Troxville v. Granville case, the Supreme Court split six different ways, with only one justice — Clarence Thomas — finding that parental rights are fundamental and should be accorded the correct legal standard for that status. As a result, many lower courts are issuing inconclusive rulings that endanger parental responsibilities for raising their children. 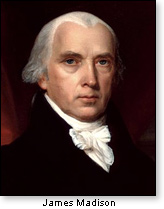 Parental rights should be spelled out in the Constitution.

A petition now being circulated in support of DeMint-Graham cites the arguments James Madison encountered when he offered the Bill of Rights in the First Congress. He was told there were other pressing matters and to come back with his ideas if any problems developed.

Good thing he persisted. If he hadn't, we might have ended up today fighting for our fundamental rights from the confines of our jail cells.

Moral of the story, then and now: Put that in writing.