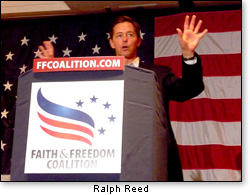 That was Time Magazine's view of author and political consultant, Ralph Reed known for establishing and growing the Christian Coalition to numbers that shocked liberals and made grassroot' (efforts) a household word. His mobilizing of newcomers into the elections process resulted in a majority Congress and eventually a win in the White House for George W. Bush. Like him or not, agree with him or not  Reed is still a force within national politics not to be ignored.

Not even losing a bid for Lt. Governor in his home state of Georgia has stopped the Reed machine from being a news-talk-staple on all the networks. They just can't get enough of him anytime they're in need of a conservative or Christian perspective. Now he's giving the liberal media even more fuel by turning up the dialogue with his Faith & Freedom Coalition  its mission to create synergy and results by mobilizing a 21st century virtual grassroots army. 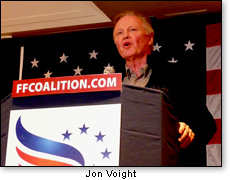 So who better to help rally the conservative base than his close friend Fox News talk show host, Sean Hannity, in Atlanta for the last of his Freedom Concert series this year. The two were joined with significant star power (Lt. Col. Oliver North of War Stories on Fox News, and Hollywood actor, John Voight) and cheers at a FFC Rally prior to Hannity's event down the road in Gwinnett County in the northern metro.

Voight said, "You inspire me being here!"

The likes of a Hollywood type are rare as such events but Voight has become more vocal because he says he loves America and doesn't want to see it torn apart. That pretty much summed up the sentiment by all the guest speakers including Reed himself inviting those in attendance to a FFC training session immediately following the rally. 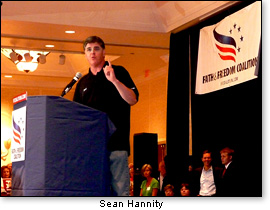 "We believe that the greatness of America lies not in the federal government but in the character of our people  the simple virtues of faith, hard work, marriage, family, personal responsibility, and helping the least among us. If we lose sight of these values, America will cease to be great."  R. Reed

If the growing numbers at town halls and rallies is any indicator, Reed just may have a big enough net to do his magic once again on the road to 2010 and 2012.