Michael Bresciani
Abortion: Was not ever politicalit has always been a moral issue 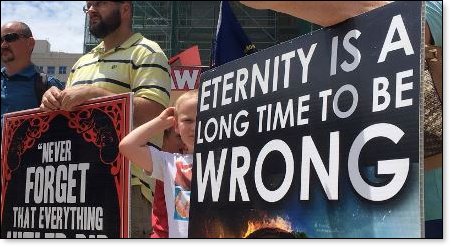 The very sound of the words a right to kill a baby gives us a clue to how deeply immoral America has become. We are now up there with the top three nations that want to retain the right to slaughter a growing, healthy human being before it gets let out into the world.

America is at the top of the list, along with China and North Korea.

Hiding under the façade of womens health," we as a nation are willing to keep the ball rolling by any means, including threats of riots, threats to Supreme Court Justices, and promises of unruly demonstrations and mayhem.

If all else fails, the Democrats are now talking up the idea of squashing the filibuster, followed by a plan to draw up and vote on a full, unlimited right to abort across all fifty states.

Is America split between those who must never give up and those who already have?

We know that anywhere in the world at any given moment, there are children suffering from hunger, disease, and horrible birth defects.

In Ukraine, children are scrambling, tripping, falling, and just trying to keep up with their fleeing parents and relatives. Raining down on them are Vladimir Putins shells, rockets, and mortars. Many of these children are blasted to pieces and left in pools of blood.

In America, we see crowds of men (but mostly women) screaming profanities and carrying placards, clamoring for the right to cut up or chemically burn their own offspring in the womb.

They voice their concerns about a government (or a court) moving to take away their right to use contraceptives. They rarely seem to notice that if they need abortions, it's because they used contraceptives to no avail, from sheer laziness or gross stupiditytake your pick.

This paradox should be enough to tweak the conscience of the most callous among us.

But it is not!

Send out the searchersan argument has been lost

There is no need for a diatribe, a tirade, or a lengthy invective to make this explanationit is a simple 1-2-3.

Common sense was far more common in days past, unlike today where it is more like the Oak Island Treasure or the legendary Bigfoot. But after all, it still seems to make sense to protect life even if those who live only for sex, self, and silliness dont agree.

The grownups of today are the extension of a permissive generation. They had everything handed to them, nothing was denied, and they would rip up every relationship they had in home, school, or church to get what they demanded.

Abortionists are middle-aged and aging teenagers, along with a few real teenagers.

They are often homosexuals or transgenders, which makes all this that much harder to comprehend. They can only use some external method to acquire children, far outside of the family model.

Now we elect and appoint them to office like Chicagos Mayor Lori Lightfoot, who sent out a war cry this week against the Supreme Court justices, even while dozens of people lay dead or dying in the streets of Chicago every single weekend from shootings and killings of every kind and description.

Whats the adage about cleaning up your own backyard?

Is killing now going to be that selective?

Even blindfolded, this prophecy is too easy to make

On the last day of his life, Christ was blindfolded and was mockingly asked to prophesy who was striking him in the face.

And when they had blindfolded him, they struck him on the face, and asked him, saying, Prophesy, who is it that smote thee? (Luke 22:64)

With the great scientific strides made with ultrasound technology, a women can see her baby in three dimension. Often, that ability to see them is all it takes to lead women considering abortion change their minds and keep their own child.

What if the child could see the mother? Hypothetically, would the stare into the mothers eyes end the very idea of an abortion? How can anyone be sure that each mother will not one day look directly into the eyes of their childrenaborted or not?

The promise of the Bible is that one day we will see even the aborted children. We have neither the time nor the inclination to argue with people about this promise. But we also have little time to argue against it.

This is where even the poorest prophet can predict the future from behind a blindfold.

Here is what a true prophet would say to the abortionists.

You will bring the coming judgments against this nation forward much sooner and with greater severity than you can imagine.

Every fire, flood, riot, tornado, hurricane, and storm will be supercharged and intense. Your fields will dry up in drought, and pestilence and diseases will not abate or be cured. All this if you insist on clamoring for the life of the innocents.

God has already declared itI am only the forwarding messenger.

Keep thee far from a false matter; and the innocent and righteous slay thou not: for I will not justify the wicked (Ex. 23:7).

Want the Supreme Court or Congress to make you a law? Sorry, you are just a little too late, one already exists.

Shall the throne of iniquity have fellowship with thee, which frameth mischief by a law? They gather themselves together against the soul of the righteous, and condemn the innocent blood. But the LORD is my defense; and my God is the rock of my refuge. And he shall bring upon them their own iniquity, and shall cut them off in their own wickedness; yea, the LORD our God shall cut them off (Ps. 94:20-23).

What we see in America today is that both the sin and the calamity will continue, but be sure of this: the sinning will be overtaken by the calamity!

Biden: I am a child of God  Does he think abortion is a God-given right?

Abortion Doctors and Vladimir Putin  Both, Deadly for Children

Best of Archives Series  Abortionists: Cruel and Brutal Defenders of Infanticide and the Most Sadistic Racists on Earth

May 11, 2022
Abortion: Was not ever politicalit has always been a moral issue

April 28, 2022
Why is Joe Biden the only president in U.S. history who appears to hate Americans?

April 21, 2022
No, its not the economy, stupid  its the raging perversion, moral depravity, and transgender mutilation of our own children

April 3, 2022
Transgenderism – Americas demonically inspired path to its own destruction

March 20, 2022
Abortion doctors and Vladimir Putin  both, deadly for children

March 6, 2022
Bidens SOTU  A walk through the valley of blatant lies and obfuscation

March 4, 2022
The global response to Putin  A preview of the coming war without weapons