December 29, 2012
You may have heard that humorous story about Phoebe, a 50-year-old widow from Beverly Hills. Phoebe suffered a heart-attack and was taken to Cedars Sinai Hospital.

During the time Phoebe was on the operating table, she had a near-death experience. She saw the Lord and asked, "Is this it?" God said, "No you have another 30 or 40 years to live."

Upon recovering, she resolved that since she had 30 or 40 more years, she might as well make the most of the time she had remaining. So Phoebe stayed in the hospital and had a face lift, botox for her lips, liposuction, and breast augmentation. Phoebe even had someone to dye her hair.

After the last surgery, Phoebe walked out of Cedars Sinai lobby and a speeding ambulance ran over her. She died on the spot and appeared before the Lord again.

There is a sense that God doesn't recognize those who have vested their lives in things temporal at expense of the eternal. On a number of occasions, Jesus taught that at the Judgment He would say to many, "I tell you, I don't know you. Go away, all you who do evil" (Luke 13:27).

At the start of the New Year, many people will make New Year's resolutions. But unfortunately, most of them will in no way pertain to the soul. Most resolutions are likely to focus on matters such as losing weight, getting out of debt, improving one's career, making new friends, improving self, etc. And though there is nothing wrong with these resolutions, most of them will be made primarily out of selfish motives.

But what about God? The Bible teaches that we were made in His image (Genesis 1:27) and our times are in His hands (Psalm 31:15). One of the most beloved of Psalms, Psalm 100 tells us, "Know that the Lord himself is God; it is He who made us, and not we ourselves" (v. 3). In other words, we were created and introduced into this world for God and His purposes.

George Burger once put to pen and paper a resolution truly worth emulating. He wrote:


"I will like Paul, forget those things which are behind and press forward; like David, lift up mine eyes unto the hills from whence cometh my help; like Abraham, trust implicitly in my God; like Enoch, walk in daily fellowship with my heavenly Father; like Jehoshaphat, prepare my heart to seek God; like Moses choose rather to suffer than to enjoy the pleasures of sin for a season; like Daniel, commune with my God at all times; like Job, be patient under all circumstances; like Caleb and Joshua, refuse to be discouraged because of superior numbers; like Joseph, turn my back to all seductive advances; like Gideon, advance even though my friends be few; like Aaron and Hur, uphold the hands of my spiritual leaders; like Isaiah, consecrate myself to do God's work; like Andrew, strive to lead my brother into a closer walk with Christ; like John lean upon the bosom of the Master and imbibe of His Spirit; like Stephen manifest a forgiving spirit toward all who seek my hurt; like Timothy, study the Word of God; like the heavenly host, proclaim the message of peace on earth and good will toward all men; and like my Lord Himself, overcome all earthly allurements by refusing to succumb to their enticements.

Realizing that I cannot hope to achieve these objectives by my own strength, I will rely upon Christ, for 'I can do all things through Christ which strengtheneth me' (Philippians 4:13)." [2] 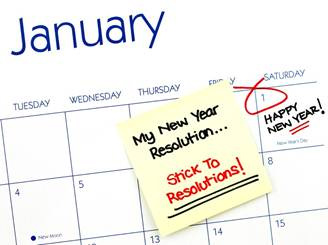 To live righteously before God is the greatest resolution anyone can ever make in life. Such a resolution begins with repentance of sin and turning to Christ for forgiveness.

This present world's value system is not likely to recognize or laud this kind of life, even though its impact for good is immeasurable. Nevertheless, one thing is for certain, God will. And on the last day He will say, "Well done, good and faithful servant! You have been faithful with a few things; I will put you in charge of many things. Come and share your master's happiness!" (Matthew 25:23).

Wow! To resolve to give one's life to God through Jesus Christ is a resolution that counts for now and eternity.