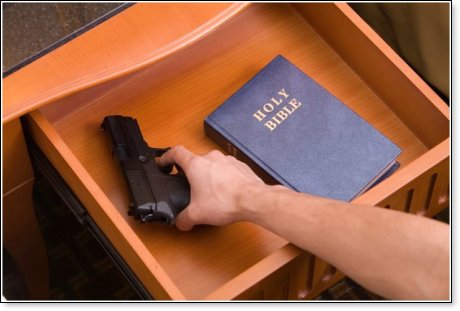 After a gunman opened fire in the West Freeway Church of Christ during a worship service last month, the Associated Press noted that 2019 was "one of the worst years in recent history for attacks on religious groups or places of worship."

According to the Violence Project Database, which is funded by the National Institute of Justice, "mass shootings in places of worship are becoming more frequent, starting in the mid-2000s, and the number of shootings motivated by religious hate have increased most dramatically in the last five years."

But the shooting that took place at the West Freeway Church of Christ in White Settlement, Texas, shows parishioners' understanding of Jesus' command to "turn the other cheek" doesn't mean they should give up their right to self-defense. The church in White Settlement had a security team that swiftly took down the assailant. The gunman killed two, but it could have been a much deadlier scenario.

Like West Freeway Church of Christ in the Lone Star State, many churches across the Tar Heel state have also developed voluntary security teams that have concealed carry permits and are "packing heat." By the time the parishioners of these houses of worship start with the opening prayer, the policies and plans of their security teams are already in place.

North Carolina law allows firearms in churches unless the church prohibits them, but forbids guns in schools. So what happens, in this day of escalating church shootings, if your church is meeting in a school building, as many currently do across the state? It would mean parishioners would be entirely vulnerable for some mass shooter motivated by ethnoreligious, anti-Christian hate, or some other ungodly reason. God forbid.

This gap in protection for churchgoers became the concern of former Rep. Rena Turner (R-Iredell) last year. She sought to address the problem in HB 110-Protect Religious Meeting Places. Turner's bill would have authorized persons with a concealed handgun permit to carry a concealed handgun, under certain conditions, on education property that doubles as a school and a place of worship. The gun, however, could only be taken on educational property outside of school operating hours.

The legislation was more than reasonable. It passed the North Carolina House, but when it got to the Senate Rules Committee, it was never taken up and died a quiet death. Thus, churches or church groups in North Carolina meeting in schools today are left as defenseless as fish in a barrel.

In the same year when there was a mass stabbing of five people at a rabbi's house in New York state, a mass shooting at a kosher grocery store in New Jersey (killing three), a mass shooting of four people at the Chabad of Poway synagogue in Poway, California (leaving one dead), and now the shootings at a church in White Settlement, Texas (causing two deaths, besides the gunman's) – all in 2019 – it seems derelict for North Carolina lawmakers to ignore legislation like Turner's, which would broaden protection for worshipers.in the state

Unfortunately, Turner is no longer around to champion the measure. She decided to retire in June and allow Rep. Jeffrey C. McNeely, who was appointed to fill her seat, to get some experience before deciding to run for it. Moreover, the bill is no longer eligible and can't be considered in its current form. It would have to be filed again, and that's precisely what needs to happen as quickly as possible.

Turner says such legislation wouldn't have any problems getting through the state House. She even believes there is more than sufficient support for it by state Senate members. The problem is that it might get stalled again in the Senate Rules Committee.

Turner said she believes public sentiment about guns and gun control also makes the matter more urgent. "I think now might be the best time with all this stuff going on in Virginia," she told the Christian Action League of North Carolina, "People are very aware of their Second Amendment rights."

Few people are likely to remember that in December of 2007, a gunman killed one person and wounded four others when he started shooting the good people of New Life Church in Colorado Springs, Colorado. Like the situation at West Freeway Church of Christ in White Settlement, Texas, a church security officer shot the gunman and kept him from killing others. He was rightly hailed as a courageous hero who saved many lives that day.

The circumstances in both of these situations prove that whenever a lone gunman aims the barrel of his weapon at a church full of people with the presumed intent to kill, mass murders are less likely to happen if people in the congregation are also carrying weapons and prepared to act.

These are wicked and dark times. Churches without security teams need to take steps to protect their members.

The North Carolina General Assembly needs to take steps to allow churches that meet in schools to protect themselves.

The primary purpose of any church should be to lead people to a saving knowledge of Jesus Christ. But if someone insists on coming into a worship service flashing a gun with the seeming intent to kill indiscriminately – to take the life of innocent people, women, children, and the elderly – then there is no sin in immediately sending that person to meet their Maker.