February 11, 2013
While I was a conservative by age 12, for some time thereafter I viewed liberalism as most do, as just another ideology. Sure, it was an irritating ideology, but an ideology nonetheless. But then something happened. I don't quite remember if I was 20, 21, or 22, but some experiences in my life and much pondering of the issues and the human condition led to an insight. It hit me like a bolt of lightning:

Liberalism is what evil is masquerading as in our time.

I won't go into the labyrinthine details of the matter here, but it was a life-changing epiphany that ultimately led to a transition from secular-conservative/libertarian to man of faith and walking, talking anachronism. And it made me realize that liberals aren't just misguided, which they are – they're also in bed with evil.

This is apparent in much of what they do, and the support that murdering fugitive Christopher Dorner is receiving from the left is a good example. It doesn't matter that Dorner is clearly an unhinged man blaming others for his own failures; it doesn't matter that he shot innocent people; it doesn't matter that the only sin of one of those innocents, Monica Quan, was being the daughter of a man who Dorner thought didn't represent him adequately during an LAPD review process; and that another's only sin was agreeing to become Quan's fiancé. None of this matters because Dorner possesses all the qualifications of a leftist zero hero: he's pro-gun control, admires other zeroes such as Barack Obama and Piers Morgan, and is anti-cop.

Thus are there Facebook pages dedicated to Dorner, such as "We Are All Chris Dorner" (if this means all of the left, it's a tenable theory), whose creator calls the killer "the victim of a manhunt and smear campaign." One poster at the page named Aaron Hughes writes, "this guy is a hero." Another page is "We Support Christopher Dorner," with postings such as this one from a James McCarthy: "I support you and good hunting ,, tou [sic] are a true patriot." This is just a small sampling, mind you.

There are also pictures, with captions such as:


SO WE'LL HATE HIM

Because he can take it. Because he's not our hero. He's a silent guardian, a watchful protector. A dark knight.


WANTED
FOR TAKING OUT THE TRASH
Once again, this is but a sampling.

Of course, we'll hear that these are just "exceptions," but the left has a funny knack for turning exceptions into the rule. And as far as patterns go, it certainly is the rule. Just consider many leftists' response to a very cute pre-election video of a six-year-old boy giving ten reasons not to vote for Barack Obama. Here's a handful of their YouTube postings (excerpted from a PatriotUpdate.com article): 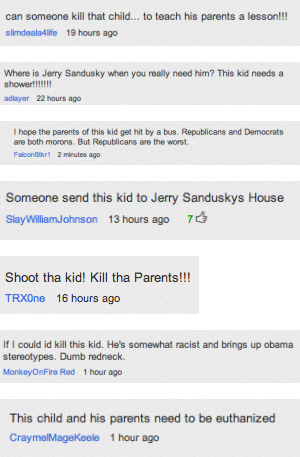 And here is one I have to print so it can be cleaned up (as much as liberals' messes can be):

Note that liberals often use children to spread their message; everything is "for the children"...and by the children and of the children. Obama just surrounded himself with them when signing gun-control executive orders and had little tykes reading statements. We had to watch in 2008 as kids marched for him in videos and sang "Barack Hussein Obama, mm, mm, mm!" But did you ever see conservatives post vile sentiments anytime, anywhere about how they wanted to abuse or kill these children? I spend many hours on the Internet and have never seen such a thing. Of course, a leftist may unearth an example – and I wouldn't be surprised if such a thing were manufactured NBC style – but the point is that exceptions on the right actually are just that. Exceptions on the left are everywhere.

They're in the history books, too. Maximilien Robespierre was an ardent opponent of the death penalty; that is, until he and his fellow French revolutionaries took power and he used the guillotine to murder thousands. The communists in the Soviet Union murdered at least 20 million and the Maoists in China approximately 70 million. And the Khmer Rouge exceptions in Cambodia exterminated one third of their nation's population between 1975 and '79. As for anticipated futures, the people Obama ally Bill Ayers was breaking bread with theorized that they may have to kill 25 million "capitalists" in order to complete a communist revolution in America. Hey, you have to break a few eggs to make an omelet, right?

This is why I've long had a different take, a philosophical one, on sociopathy. I believe that it may simply be the result of taking liberalism – or, to be precise, the relativism central to it – to its logical conclusion. After all, if what we call right and wrong is simply man's preferences and thus doesn't really exist, it makes no sense to have a conscience. For there is nothing to be conscientious about.

What is for sure, however, is that modern liberalism is moral dysfunction.

May 6, 2022
Is the left agitating for war with Russia so it can cement domestic tyranny?

March 15, 2022
Alas, the best outcome in Ukraine now may be a relatively quick Russian victory

February 18, 2022
Anyone whod cancel George Washington is an enemy within