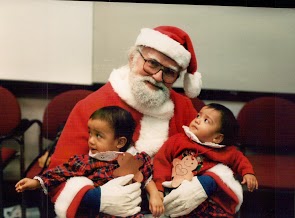 This time of year brings back fond memories of Christmases past – like the time I interviewed Virginia O'Hanlon, who as an 8-year old triggered one of the most famous editorials in history.

Her friends had told her there was no Santa Claus, so she had written a letter to the NY Sun: "Dear Editor, I am 8 years old. Some of my little friends say there is no Santa Claus. Papa says, "If you see it in The Sun, it's so." Please tell me the truth, is there a Santa Claus?

A few days later, an editorial appeared, giving her this reassuring answer:

"Yes, Virginia, there is a Santa Claus. He exists as certainly as love and generosity and devotion exist, and you know that they abound and give to your life its highest beauty and joy. Alas! How dreary would be the world if there were no Santa Claus! It would be as dreary as if there were no Virginias. There would be no childlike faith then, no poetry, no romance to make tolerable this existence. We should have no enjoyment, except in sense and sight. The eternal light with which childhood fills the world would be extinguished."

I interviewed Virgina in 1956. By then she was ready to retire after a long career as a teacher in New York state. She had already given back far more to future generations of children than the editorial writer ever dreamed of. That's what Christmas is all about, a time to invest in the dreams of children so that they can keep love and generosity and faith alive for still another generation.

Christmas also reminds me of the four years that I played Santa for the little ones who were patients at Morristown Hospital's Child Development Center, most of them born prematurely and with varying degrees of disability – but thriving under this program's followup care.

It was great fun to bring happy surprises to the children there, but what impressed me most was the love and altruism shown not only by the professionals there, but also by the parents and grandparents who brought their children and grandchildren there. Not one of them expected anything in return except for these children to grow and prosper. Not just at Christmas, but for however long it took.

That's also how that "Santa" myth began. The original St. Nicholas was a 4th century bishop in a place called Myra, where the prevailing custom was that a woman needed a dowry if she were to have any hope of marriage. One poor man had three daughters who were destined for spinsterhood or worse. Mysteriously, bags of gold were tossed in their windows at night, so that each in turn could be married. This is presumably the origin of the custom of children leaving stockings out for St. Nicholas to fill.

It is also a reflection of the central idea in Christianity, the so-called mysterium,the idea that someone higher up – a king, prince or bishop – would reach down to someone poorer or more helpless to lift them up. This is also the meaning of the Incarnation – God reaching down to take on our humanity in order to lift us up and enable us to share in His divine life.

A perfect, changeless God could not do this in any other way than by taking on our humanity as a helpless infant at Bethlehem and bearing witness to us by His life, death, and resurrection. On the cross, only His humanity could suffer. That's why the cross remains His ultimate embrace.

Catholics seem generally unaware that this is exactly the same thing that is re-enacted at every Mass. All we bring to it is our humanity – the work of our hands, our weaknesses, our failings, our need for forgiveness, and the human suffering we all experience.

Christ takes all of that up in the form of mere bread and wine, the work of human hands, and transforms it once again through the reenactment of His death and resurrection. Again, it is the same mysterium at work, God reaching down to lift us up.

We don't seem to understand what a powerful idea that is. If we did, the indifference to evil that is so widespread today would implode in an instant. We could no longer shrug our shoulders and say, "That's the way things are." "Oh, we can't touch that because it's too political." Or: "Oh, its the culture!"

Unfortunately, we're no less human than the Eleven who ran and hid from what was happening on Calvary that tragic Friday afternoon. To them, Golgotha was the end of the road from Bethlehem. It was too painful to admit that all they had experienced with Jesus for three long years was ending with His crucifixion. So they hid behind the mask of denial.

Today, we call it political correctness. No one wants to count the 57 million innocents whose lives have been snuffed out in America's abortuaries. That's 50 times more people than we have lost in all the wars in our history. It's a number we're too numb to fathom.

Worldwide, the number is over 1.6 billion – equal to the entire population of the planet in 1900. Yet at least two new books have come out this year calling for even more stringent measures to ward off fresh fears of a new population explosion. These measures include increasing government control of our freedoms of speech, conscience and association.

St. Paul called them "the freedom of the sons of God." And yet that's the very thing we most stand to lose if we remain silent, indifferent, and apathetic. The time has come to use it or lose it.

We can either start taking seriously the meaning of Bethlehem, the meaning of the cross and of the Resurrection, or we stand to lose the blessings of liberty, not just for ourselves, but for our children and grandchildren as well. Surely that would mean the end to Christmas.

St. Augustine once said, "Hope has two daughters. The first is anger at what is wrong with the world. The other is the courage to do something about it." Right now, we need a healthy dose of both.

So what can you do about it?

This year, we are making a new effort to spread the idea behind our very effective Celebrate Life Seminars for Teens nationwide. No other program we know of has had the same impact as these 2 to 3 hour seminars in spreading the Culture of Life among young people, including a 75% increase in the number of teens who are strongly pro-life and a 33% drop among the confused kids in the middle who have succumbed to the popular cliches about abortion. We urgently need:
If you are interested in any of these ways of helping, email us at mbaforlife@gmail.com, or call me at 973-895-7367