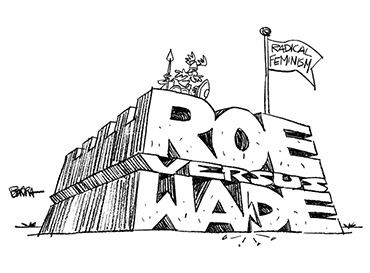 "Can America be Saved?" was the provocative title of an intriguing panel held in conjunction with Cleveland Right to Life's annual symposium called "Bringing America Back to Life." Hosting the panel was Michael Voris of Militant Catholic TV. The 12 panelists included Molly Smith, president of the Cleveland group, and Judie Brown, president of American Life League.

The goal of the panel was to realistically assess where the pro-life movement stands in terms of its progress against abortion and related threats to the right to life.

"In one sense, we're just treading water," said Judie Brown. "We see polls claiming America has a pro-life majority, but when you get down to the nitty gritty, including the so-called exceptions, they don't stand up. In fact, we're treading water in terms of progress in reaching the young. We face a tremendous challenge to educate better, and the churches have to support this."

National Right to Life recently "disaffiliated" the Cleveland group for publicly disagreeing with Senator Robert Portman on the issue of gay marriage. Molly Smith said she does not believe the two issues – abortion and support for traditional families – should be separated. She told the Cleveland Plain Dealer in a phone interview: "How can you be for the child if you are not for the family?"

One result of such dissension is confusion, especially among young people. In our research on teens, MBA has found that the biggest problem among young people are the confused teens who accept contradictory views such as, "Abortion is always wrong, but it should still be legal."

However, we also found during our teen seminars that teens in the so-called "confused middle" were also our biggest source of converts to stronger pro-life views. Based on surveys before and after each seminar, that group dropped by 40% while those with strong pro-life views increased by 75%. Clearly, helping teens think through these issues is a great opportunity for changing hearts and minds.

That's why we're redoubling the efforts behind our successful Celebrate Life seminars for teens and initiating adult seminars as well. With the help and encouragement of the American Life League we're recruiting new seminar teams wherever we can around the country, starting right here in New Jersey. We've also made arrangements with producers of The40Film, an outstanding pro-life documentary, to show it in conjunction with both adult and teen seminars.

As we see it, three things are urgently needed if America can indeed be saved from the increasingly hostile secular movements promoting abortion and same sex marriage.
Catholic churches in the United States outnumber abortion mills by 11 to 1. If you include all other churches, the ratio is 175 to 1. In the face of such numbers, we have to ask: "Why aren't we winning the cultural war?" The answer is: because we are still not taking appropriate and concerted action.

Taking back the culture – what the late Cardinal O'Connor called being "countercultural" – is clearly a task that needs to be undertaken by committed Catholics working hand in hand with their Protestant, Evangelical and Black compatriots in their respective churches. We have a choice. We can either work together or we'll die separately.

This is not just an ideological battle. It is a question of faith. Do we define personal happiness as little more than material well-being in this life? Or do we believe that our Creator has not only destined us for a fuller, richer, happier life in this world, but for eternal happiness with Him as well?

Do we love God with all our hearts, and our neighbors as ourselves? Do we recognize that conversion of our own hearts and minds has to come first? Then we have to take the pro-life message to others.

If we lose this battle for the hearts and minds of today's younger generation, there is no way we can save America from its current moral and social decline. That's why we urgently need your help today in this effort to awaken our churches and carry this message to our young people.

P.S. Thanks to all who remembered us in their prayers during our health crises, starting with my bout with prostate cancer and Anne's more recent hip surgery. Thank God, we're bouncing back!

To see the 1-hour video panel on "Can America Be Saved" click on the link below.