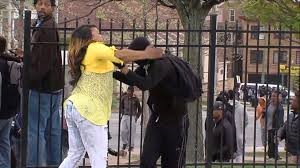 The best news to come out of the riotous social breakdown in Baltimore last week was the visual parable of Maya Graham – the Mama Grizzly of Baltimore – coming to rescue her son Michael from his fast track to trouble.

She had warned her son early in the week to avoid the protests, but then spotted him on television headed for the protests. His mask and hoodie might have been enough to give him anonymity in the crowd, but not to the eagle eyes of a Mama Bear determined to keep her 16-year-old out of trouble.

Dropping everything, she headed straight to where the television cameras had caught him, and in no time flat, was giving him love slaps around the head and telling him to get his little 16-year-old ass right on home where it belonged.

She could see that he was already sliding down the slippery slope to jail or worse that is the predicable path of far too many young blacks in Baltimore and other urban centers in America today, and she wanted no part of it.

"I don't want him turning out to be another Freddie Grey," she declared, citing the 25-year-old with 22 previous arrests whose tragic death triggered the protests. Grey died after a 45-minute-long trip in the back of a police van on the way to being booked. Six policemen are currently charged with negligent homicide and lesser charges for failing to respond to Grey's need for urgent medical attention.

Something went seriously wrong during those 45 minutes, but nobody seems to know what it was. The stark fact remains: Grey is dead.

The incident led to 24 hours of the worst rioting, looting, and arson that Baltimore had seen since the 1968 riots following the assassination of Dr. Martin Luther King, Jr. Those riots lasted for 7 days and accounted for six deaths. 700 people injured, 1200 fires set, 1000 small businesses destroyed, and 5,800 rioters arrested.

This time, the charging and arrest of the six policemen calmed the crowd and cut the riots short, but the big question remains: What will the mob's reaction be if the cops are acquitted? Legal experts like Alan Dershowitz of Harvard Law have warned that acquittal could bring riots again.

What makes the 2015 riot different is the long, downhill breakdown in moral, social and family values in the black community that has happened since 1968. Back then, a majority of black households were headed by a father and a mother. Now, female-headed households make up more than 70% of all black households, and young people running wild is part of the price the community is paying.

Mama Graham's situation is typical. She's heroically trying to raise 6 kids, including Michael and his five sisters. Meanwhile, she just lost her job. Without economic opportunity, her prospects are bleak, and so are her kids'. In spite of these difficulties, she still stood out as a genuine pro-life hero.

Unfortunately, the odds against her daughters making it into adulthood without experiencing single parenthood are enormous. Their path is strewn with pitfalls like an over-funded, underperforming school system, widespread male irresponsibility, and all-too-easy access to drugs, contraceptives, abortion, STD's and promiscuous sexual behavior.

It's a satanic cocktail for today's young blacks.

Abortion long ago replaced lynching as a major crime against blacks, yet few black leaders raise their voices against it. In the 104 years from 1864 to 1968, some 5,000 blacks were lynched. In the 47 years since, 20,000,000 blacks have been aborted – dramatically reducing black population and economic growth. The number of Jews slaughtered in the Nazi holocaust pales by comparison.

New York City and New York State both qualify as places where lives lost to abortion exceed deaths from all other causes. And the largest numbers are blacks. Black births in New York City were cut in half between 1990 and 2010. Black abortion rates in New York, Baltimore and Washington, DC, are among the highest in the nation.

What rewards there are go to the "baby Daddy" who has the most kids with the most women and sticks the taxpayer with the bill. Perhaps the biggest bill of all is the high cost of our criminal justice system, including the cost of housing repeat offenders like Freddy Grey who spend half their adult lives in jail.

It would certainly cost less to "sentence" someone like that to a job for 5-7 years instead of jail. At least they would learning real skills and contributing something productive to the rest of society for their time served. That may be an idea whose time has come.

Against this backdrop, the most hopeful sign for the black community is the growing number of conservative black leaders working to rebuild the black community's once strong sense of family. That might also break the back of such infamous liberal solutions as free condoms for teens and abortion on demand when the condoms fail.

Noteworthy are pro-life leaders like Star Parker, head of Urban Cure, and pastors like Johnny Hunter, Walter Hoye, and Clenard Childress. Hundreds of black pastors are now networking across the country to bring hope to their politically-exploited people.

Fox News' Geraldo Rivera wrapped up his coverage of the riots in a discussion with Cheryl Blue, an outspoken young black conservative from Ohio, and Rev. Jonathan Mason, a liberal black pastor involved with efforts to revitalize the black community. Blue carried the day with a strong appeal to bring back fatherhood and restore the 2-parent black family to its former status.