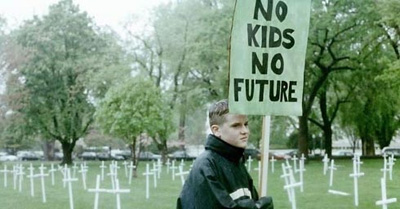 When I founded Movement for a Better America in 1995, I correctly predicted a new economic malaise starting in the year 2000 if America failed to end abortion on demand.

Since then we've had two major stock market declines, and may soon be headed for something worse – a long term economic decline that could last for decades. All of these forecasts were based on the fundamental demographic changes triggered by the abortion epidemic.

Since 1995, the abortion toll has risen from 35 million to 59 milIion, and the malaise we've experienced for the last 15 years is about to deepen.

The latest rumbles on Wall Street and in China are just a hint of what is to come.

For months, nearly all the experts have been in denial about the real causes of the economic slowdown, blaming things like more efficient oil and gas production for creating a glut in energy supplies when the real problem is a crisis in consumer demand driven by aggressive pro-abortion policies in both the United States and China.

However, our latest research suggests that abortion is fast becoming a major national security issue, and not just a matter of personal and public morality. Although politicians and pundits usually avoid the topic, abortion now threatens our very survival as a nation.

First, let's take a look at its near term effect on the U.S. economy.

This January, U.S. population will reach 327 million. However, if not for those 59 million lives lost to abortion, it would be 386 million – or 18% higher.

Can you imagine where the stock market would be with an economy 18% larger? And the youth market that has driven our economy since the 1950's would be 30% bigger! Gen X, Y and Z have borne the brunt of the abortion epidemic that has dramatically weakened America.

The Fed can fool around with interest rates all it wants, but an 18% to 30% hit on our whole economy has to be taken far more seriously.

If those 59 million young people were still around, Gen X, Y and Z would all be 30% bigger. We'd need millions more teachers, nurses, and doctors plus a whole host of other workers just to supply their basic needs. And new household formation would be running at least 30% higher, increasing demand for housing and everything that goes with it.

The high flyers on Wall Street – like Apple, Amazon, Facebook, Netflix, Home Depot, Lowe's and others – would all be flying higher. Main Street would be buzzing, too. Add better trade policies and businesses all across America would be booming.

So what else is happening to send this economy into the dumps?

For starters, what's happening in China compounds everything that is happening here. The fact is that China has lost 400 million people to abortion, and as a result, the Chinese economy is slowing markedly. By 2050, China's population will shrink by at least 40% as their large older population dies off.

They may be softening their one-child policy, but that's not going to suddenly convince the average Chinese couple to suddenly starting having 3, 4, or 5 kids, which is what they would have to do to soften the blow of this huge population loss.

In effect, the Chinese economic boom is over. And ours may be over soon as well.

That's why it took Europe 250 years to recover from the 50 million people it lost during the famous Black Death in 1347. And they didn't have abortion to slow their recovery.

The bad news is that this is also happening here. Abortion is like the new Black Death.

Just since 2007, U.S. birth rates have fallen by 1.7% a year. That's the first sign that we have started to feel the echo effect of those 59 million abortions we have already had. All of those millions are just no longer around to give birth to future generations.

Even before then deaths will exceed births for the first time as the Boomer generation ages out and dies off. In short, the U.S. is following exactly the same path as Europe, Russia, and Japan – a declining population in a declining civilization. Unless, by some miracle, we reverse course.

We are entering a new demographic free fall. You might even call it a death spiral.

The colossal mistake made by the U.S. Supreme Court is that they totally ignored the inevitable long term consequences of Roe v. Wade. Swayed by the population control ideologues, they dismissed the founding fathers' concern for "securing the blessings of liberty for ourselves and our posterity." They forgot that "posterity" has everything to do with the American future.

Meanwhile, abortion is fast becoming a major national security issue because of what is happening in the Muslim world.

Here's why. Currently, the rate of natural increase in 30 leading Muslim countries averages 1.9% a year. And that means the Muslim population of the world will roughly double from 1.5 billion today to 2.9 billion by 2050 – just when our population decline becomes really acute.

At that rate, their population could nearly double again until the Muslim world accounts for 5.5 billion people – half the population of the world – by 1985.

In short, our biggest problem today is not the sporadic terror attacks that we see with increasing frequency. It is the fact that the Muslim world is reproducing and we are not.

If nothing else changes, they'll run the world in 2050 and beyond, and not us. And they'll be able to do it without firing a shot. This could happen in Europe a lot sooner.

But what could possibly change such an outcome?

1: First, we need to get this message out to more folks who are willing to listen. A public total unaware of where current policies are taking us is incapable of right action.

2: Second, we need to work toward a complete rejection of abortion on demand in America and the West. Without that, we'll be unable to stem the bleeding of our populations and soften the echo effect on future generations.

3: Third, we need to fight for a pro-natalist policy that puts government on the side of families and children. Otherwise, we'll spend ourselves dry on the disastrous social consequences of family breakdown and out-of-wedlock births. Instead of tearing the family down, we need to invest in the family as the best place to raise the next generation of children. This is nothing more than investing in our own future.

4: Finally, we need to redirect our culture from its current decadent course into a positive, direction capable of serving as a counter to Islam. To achieve that, we urgently need a vibrant spiritual revival in the West.

Modern secular materialism can never do that because no one is willing to fight and die for it. Only a genuine renewal of Western Christianity can provide the moral and spiritual strength needed to revitalize the family and reinvigorate the West.

This is the handwriting on the wall that every American needs to hear! Abortion is a cancer that is eating away at the heart of America, and it urgently needs to stop!

Will you help me get this message out?

When I sent an advance copy of this to Judie Brown, President of American Life League, she replied: "This is compelling and should give everyone involved in our effort cause to rethink. Without a Christian revival in our nation, there is not much that we can do."

I also spoke on this subject to the "Bringing America Back to Life" conference in Nashua, NH, and was able to bring this topic to the attention of one of the leading candidates for President. But we have to do more. This issue is now so serious that we have to consider it right up there with both national security and the economy as major issues.

Here's who needs to hear this message:
We dare not hand off a declining America to the young people in this nation.

You can help by forwarding this a link to this article to interested friends and by donating $30 or more to help fund this important outreach. Your donation will be used to get news of this research into the hands of key leaders.

To help with this most important project, just go to our DONATION PAGE and make your donation via Paypal. Or just send your donation today to:

Movement for a Better America, Inc.

"Remember, whoever sows sparingly will also reap sparingly, and whoever sows generously will also reap generously. Each man should give what he has decided in his heart to give, not reluctantly or because he is under pressure to do so, for God loves a cheerful giver. God will give you more blessings than you need. Then you will have plenty of everything, enough to give to every good work." – Second Corinthians 9: 6-8