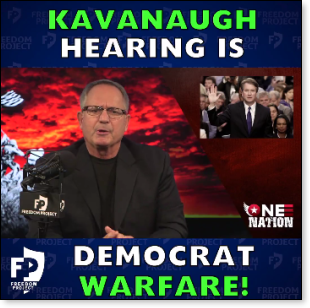 America is at war.

This is not like past wars in American history, supplied amply with armies and military weapons. This is a Worldview War of values and ideas that fight for the very soul of America. And right now the battleground surrounds Brett Kavanaugh.

For the past few weeks the country has been exposed to this war during the Senate Confirmation hearings of Judge Brett Kavanaugh, who is President Donald Trump's constitutional conservative pick for the Supreme Court.

What was supposed to be an adult discussion and debate about judicial philosophy and methodology has turned into a juvenile three-ring circus with Democrat clowns and acrobats distorting the normalcy of legitimate constitutional deliberation.

By now we all know about the last-minute charge by Democrat leaders of Dr. Christine Blasey Ford's alleged uncorroborated and unsubstantiated sexual harassment by Brett Kavanaugh. We also know that all four people who Dr. Ford claims witnessed the attempted sexual assault against her deny it ever happened.

And we have just recently learned of another even more bizarre allegation of sexual misconduct where a drunken Deborah Ramirez, with partial "foggy" memory, says she cannot be certain Kavanaugh was the male who exposed himself at a drunken Yale party.

Ramirez not only has no witnesses that Kavanaugh was ever at the booze party at Yale, but there is not one person who could be found to corroborate Ramirez's claims. She admits she cannot be certain that her memory was correct about Kavanaugh.

Instead of going to the police and the proper legal channels for administering justice, these Democrat accusers and Democrats on the Senate Judiciary Committee have created a theater of the absurd, where in collusion with the radical Left, they will go to any extreme to keep any conservative nominee off the Supreme Court.

Sen. Mazie Hirono, a pro-abortion Democrat from Hawaii, who is on the Senate Judiciary Committee, believes that Judge Kavanaugh may be guilty of sexual assault simply because he might overturn Roe v. Wade.

This is the crux of the matter. It is the reason for the Left's vicious worldview war on conservativism and Christianity. Kavanaugh is guilty of being a pro-life, conservative, Catholic, white, male, who, in the minds of the "social justice" leftwing warriors, is culpable of oppressing women and minorities.

Gone is the idea that authentic justice requires equality before the law based on evidence. Now it is unsubstantiated allegations birthed in leftwing political expediency. Americans of both parties and independents ought to be outraged by this display of Stalinistic show trial chicanery.

Can you imagine future Senate hearings where judicial process and justice are ignored, and allegations upon allegations are thrown about like cheap beer at a college frat party?

What we have seen at the Senate Judiciary hearings has been a high-tech lynching by uppity and arrogant power-hungry feminists, leftists and Democrats who do not at all care about justice. They simply want to destroy Judge Kavanaugh because he and those like him stand in the way of their licentious leftism.

My fellow Americans, will we allow this postmodern disease to destroy justice and our Constitutional Republic under God? Will we fight the lies of the Left? Do we love America enough to stop this onslaught?