Lloyd Marcus
'Tis the season to celebrate Jesus, not Obama

December 19, 2010
While minding my own business reading emails, I was included with numerous recipients receiving a holiday greeting email from a dear black relative. The email reminded us that the holidays are a great time to be "thankful for" the "blessing" of having Obama as president. The email oozed with syrupy over-the-top praise of Obama including his, (and I quote), "room-lighting" smile. 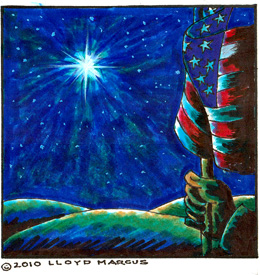 Remarkably ill-informed and distorted, the email listed every item of Obama's hostile takeover of our country as blessings to be "thankful for" (http://blackwaterdog.wordpress.com/2010/11/25/im-greatful-2/)

Fighting my gag reflex and not wanting to make waves, I was about to simply delete the absurd propaganda email. However, an earlier phone conversation with my 83 year old dad led me to decide to respond to the liberal bull-crap.

Dad, Dr./Rev. Lloyd Marcus Sr., has always been a great source of wisdom and inspiration for me. As we chatted over the phone, I thought, "Wow, at 83, Dad is as sharp and bright as ever."

"Jesus said we are the salt of the earth. But, if the salt has lost it's savor, it is useless", said Dad. Dad also quoted the scripture about letting your light shine rather than hiding it.

Liberals freely spout their rhetoric as if it were gospel, while conservatives tend to be careful, non confrontational and low key about their beliefs. And still, conservatives are branded by liberals as pushy and intolerant.

I thought, "My relative chose to include me as a recipient of her "Obama is Just Below Jesus" holiday greeting email." I know the truth about Obama. Thus, it is my duty to share that truth. America is under attack by an evil enemy within. Patriots must be salt and light; boldly standing up for truth and righteousness.

There are several issues I could have shared to explain why Obama is bad for America. However, since my relative is a Christian, I thought it wise to inform her of Obama's policies which do not align with her Christian values.

I sent my response via, "reply all" for everyone on her list to receive it. Prayerfully, at least one person on her list will see the light. Here is my reply.

"Hi Folks, I DO NOT share my politics with those I know disagree. However, this email praising Obama was sent to me. Thus, my reply. As a Christian, when casting my vote for president, I had the audacity to look beyond Obama's skin color and at the man.

Obama is pro abortion. 50% of black babies are aborted. (Blackgenocide.org)

Obama is pro partial birth abortion. Everything except the baby's head is delivered. Scissors are inserted into the baby's brain to kill it. They justify this hideous murder by claiming it is for the health of the mother. 99.9% of the time, it is because the mother says she is not emotionally ready for a baby. Why is Obama pro abortion? Answer: To guarantee the radical feminist vote.

Senate Majority Leader, Harry Reid, with Obama's blessing, said within the next ten days he hopes to pass a law permitting gays to serve openly in the military.

Obama canceled the White House National Day of Prayer because, in his own words, "Did not wish to offend anyone." And yet, he permitted the Muslims to celebrate their day of prayer on Capitol Hill.

Though vilified for being a black who refuses to worship at the feet of Obama simply because he is the first black president, I choose to answer to a higher authority.

Y'all have a Very Merry Christmas and a Happy and Blessed New Year."

I received a speedy reply to the above email from my Obama loving relative. Amazingly, she and her liberal friends who also replied totally ignored every point I made about Obama. My relative accused me of being offensive and of spouting republican talking points. Her liberal friends were annoyed with me. Their consensus was "how dare I reply disagreeing."

Typically liberal, they feel free to send me unsolicited liberal crap. But, if I reply with a conservative point of view, I am a jerk. Still, I believe, by faith, that my "salting" made a difference. Someone on my relative's list will be compelled to seek the truth.

My relative's response is typical of blacks emotionally seduced by Obama. Though as a Christian, she would never admit it and may not even realize it, I believe my relative's blind loyalty to Obama is rooted in her suppressed "black racism."

Encouragingly, there are a growing number of black Christians awakening from their Obama trance; no longer able to justify sacrificing Godly principles for loyalty to skin color. It is critical that white conservatives not be intimidated and black conservatives continue sharing the truth with black America.