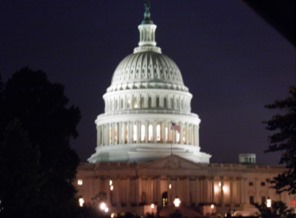 - THE WAR IN LIBYA

During a recent visit to Washington DC I had the distinct pleasure and honor of meeting with one of America's greatest leaders, U.S. Senator Marco Rubio, from the State of Florida.

As always, Senator Rubio is both distinguished and humble. I felt the same warmth and sincerity from him, now that he is a U.S. Senator, as I did when I met with him during his campaign in 2010.

My visit with Senator Rubio was an auspicious moment to pose my questions, which were centered on Israel, as well as the war in Libya.

Senator Rubio, who had just met with the Chancellor of Germany, Angela Merkel, described to me how Chancellor Merkel shared his opposition to a United Nations unilateral action for Palestinian statehood, which could take place in September, during the annual UN General Assembly. The United Nations vote could serve as a proclamation of a Palestinian state, whose territory would include the West Bank, Gaza and East Jerusalem.

A United Nations resolution proclaiming Palestinian statehood would also claim the 1967 "borders" as the boundary — which is nothing more than the 1949 armistice lines — whether President Obama's admonitions on "land swaps" are included or not. The Jordanian-Israeli 1949 armistice line [1] marked the farthest westward military point reached by Jordan during Israel's War of Independence, also known as the 1948 Arab-Israeli War.

The Elusive Line in the Sand

The term "a line in the sand" takes a whole different meaning in this ancient region, when considering international borders and battle frontlines.

The armistice lines established in 1949, to a certain extent overlapped, or were in proximity to the borderline of Palestine during the British Mandate — except for the region of Judea and Samaria, and the surrounding area of the Gaza Strip.

The armistice line with Lebanon is close to the international border that existed during the British Mandate, with some overlapping.

As to the Jordanian front, Article II of the Jordanian-Israeli 1949 Armistice Agreement did not dictate territorial lines, stating that the provisions of the agreement were being "dictated exclusively by military considerations." 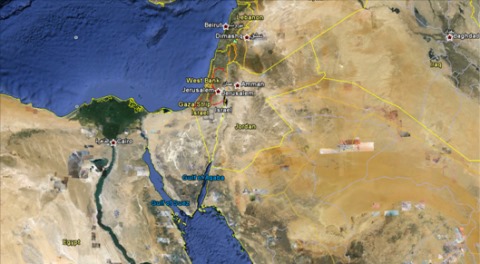 After the 1967 Six-Day War, the drafters of United Nations Security Council Resolution 242 [2] declared that the old armistice line needed to be replaced with a new border — which became the reference point for the Arab-Israeli peace talks. Resolution 242 did not recognize the line where the conflict began, and ignored the fact that the 1967 line was never an international border. Yet, one of the framers of Resolution 242, U.S. Ambassador to the U.N., Arthur Goldberg, acknowledged the historical absence of clear territorial boundaries in the region. This is why Resolution 242 did not ask for complete withdrawal from all territories captured by Israel in 1967 during the Six Day War, until secure and recognized borders could be established.

With the passage of time, boundaries, battle lines and lives have been erased, as agreements and documents are drawn in search of peace, sometimes even twisting the terminology in an attempt to rewrite history. Meanwhile, the Palestinian National Authority staunchly refuses to recognize Israel as a Jewish state.

On April 14, 2004 President George W. Bush wrote a letter to Ariel Sharon, Israel's Prime Minister at the time, as part of a final peace settlement:

EXCERPT: "Israel must have secure and recognized borders, which should emerge from negotiations between the parties in accordance with UNSC Resolutions 242 and 338. [2][3]. In light of new realities on the ground, including already existing major Israeli populations centers, it is unrealistic to expect that the outcome of final status negotiations will be a full and complete return to the armistice lines of 1949, and all previous efforts to negotiate a two-state solution have reached the same conclusion. It is realistic to expect that any final status agreement will only be achieved on the basis of mutually agreed changes that reflect these realities."

President Barack Obama appears to ignore the legal fact that President Bush's letter was approved by a bipartisan majority in both houses of Congress.

Declaring that Palestine is a "state" does not grant it membership in the U.N.; furthermore, General Assembly resolutions are not legally binding, so the General Assembly will not have the power to legitimize a state; however, a vote such as this would create significant political pressure — and that is exactly what the Palestinians want, knowing full well that there is no veto power in the General Assembly.

"Not the Right Approach"

Senator Rubio emphasized that "this is not the right approach" — referring to the impending U.N. resolution.

Many on Capitol Hill are considering the possibility of limiting contributions to the U.N., should this unilateral vote take place. This is more than justified, given the United Nations abysmal record of embracing Communist states, that also harbor terrorists (such as Cuba) [4]. This time the U.N., would also be embracing Hamas [5] which the United States lists as a terrorist organization (the U.N., does not). Hamas is part of the coalition government known as the Palestinian National Authority. Limiting contributions to the United Nations is also a great opportunity for the U.S. to save money, during these desperate economic times.

In 2009, the current Prime Minister of the Palestinian National Authority, Salam Fayyad, announced that Palestinians would seek independent statehood by 2011. This was echoed last September by President Obama, when he announced that the framework for a Palestinian state could be announced in a year.

But Palestinians are not united. There is ongoing discord between Fatah, which is the dominant party in the West Bank, and the Islamic extremist group, Hamas, which is in control of Gaza. A summit held in Cairo during the month of June came to a screeching halt, when the President of the Palestinian National Authority, Mahmoud Abbas (Fatah Party) — and Hamas leader, Khaled Meshaal, continued to disagree on the leadership of an interim government. Negotiations between the two parties are now at a breaking point.

Fatah has nominated Salam Fayyad, to lead the future interim government. Hamas rejects this plan, since they see Fayyad as being under the control of the United States and Israel.

Negotiations are underway to hold a Quartet meeting in mid July (the members of the Quartet are the US, EU, Russia and the UN) to try to bring Israel and the Palestinians to the negotiating table — and to attempt to dissuade the Palestinian National Authority from seeking a vote for statehood, during the UN General Assembly.

Senator Rubio added that "we have to be a leading voice on this issue" — referring to the opposition of a unilateral move by the United Nations.

I asked Senator Rubio to share his views on the war in Libya — in light of the 268 to 145 vote by the House on June 3, approving a resolution which strongly criticized President Obama for not obtaining congressional oversight of the military campaign in Libya.

Senator Rubio stated that he supports President Obama's decision to attack Libya, "as a matter of U.S. national interest" — but he was quick to point out that he does not support the way in which President Obama has gone about this military action, without first seeking congressional approval.

In contrast, Senator Bill Nelson, (D) from Florida, whom I chatted with a few minutes after meeting with Senator Rubio, believes that President Obama did not have to go to Congress for approval to attack Libya. When I asked Senator Nelson if he understood President Obama's strategy in Libya, he responded: "I don't know if he has the right strategy."

Senator Rubio is concerned that the war in Libya could be "dragged and dragged" and become "complicated." He added that the United States "is not leading" — and that is a concern. Senator Rubio believes that had President Obama obtained the approval of Congress, the war plan in Libya could have been "decisive, quick and precise."

I asked Senator Rubio if the tribal differences in Libya could affect the long term unity against Gadhafi and his forces. His response was optimistic. Senator Rubio believes that "rebel groups are well organized — and Libya, being a nation-state, has a national identity."

Unity and national identity will definitely be crucial factors that will help the Libyan people as they fight to overthrow Gadhafi's dictatorship, and hopefully establish a democratic government. In a situation like Libya's, one can't help but consider how Palestinian disunity and terrorist elements have set back the creation of a Palestinian state.

Senator Rubio added, "any time we can take out a terrorist, we should — and Gadhafi is a terrorist."

Senator Rubio's position on Libya, as stated during our meeting, was again manifested on Tuesday, June 28, when he voted in support of a resolution [6] which authorizes the U.S. to continue participating in the NATO-led military actions in Libya. The resolution sets a time limit by stating that "the authorization for such limited use of United States Armed Forces in Libya expires one year after the date of the enactment of this joint resolution."

The resolution "does not support deploying, establishing, or maintaining the presence of units and members of the United States Armed Forces on the ground in Libya unless the purpose of the presence is limited to the immediate personal defense of United States Government officials (including diplomatic representatives) or to rescuing members of NATO forces from imminent danger."

The U.S. Senate panel's resolution will be considered on the Senate floor, during the week of July 11.

The U.S. Senate has also passed, by unanimous consent, Resolution (SRES 185) [7] cosponsored by Senator Marco Rubio, "reaffirming the commitment of the United States to a negotiated settlement of the Israeli-Palestinian conflict through direct Israeli-Palestinian negotiations, reaffirming opposition to the inclusion of Hamas in a unity government unless it is willing to accept peace with Israel and renounce violence, and declaring that Palestinian efforts to gain recognition of a state outside direct negotiations demonstrates absence of a good faith commitment to peace negotiations, and will have implications for continued United States aid."

An article titled "We won't let US derail our statehood bid, says PA official" by The Jerusalem Post (June 29) quoted statements made by Nimer Hammad, adviser to Mahmoud Abbas (President of the Palestinian National Authority). Hammad responded to U.S. Senate resolution 185 by stating that Palestinians "can't sacrifice their freedom in return for financial aid." Hammad said that the PNA wants to maintain good relations with the United States — "but not at the expense of the Palestinians' national project."

The Jerusalem Post also published an article on June 30 titled 'We recognize Israel, they should recognize Palestine' — where Mahmoud Abbas is quoted defending the PNA's effort to obtain unilateral recognition of Palestinian statehood at the United Nations, claiming that such an attempt "does not seek to ignore or dismiss or delegitimize Israel."