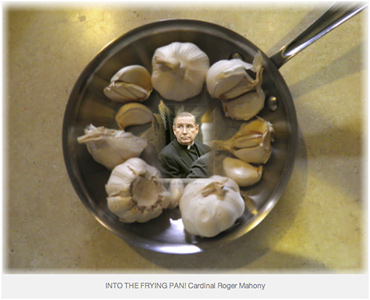 Cardinal Roger Mahony is very persistent with his use of social media and blogging, in his attempt to change history. He reminds me of Fidel Castro, who once said "history will absolve me!"

Is Cardinal Mahony applying for a job as a consultant? After all, he has been boasting on Twitter and on his blog, about his big support of Francis.

"He [Francis] will be well served if he calls upon a small group of Cardinals who serve as Archbishops of Dioceses around the world to advise him on his choices. Most likely, his new appointees will not be men presently serving in the Vatican Curia, but men with a broad working knowledge of the Church world-wide and seasoned in their experience." – Cardinal Roger Mahony, on 'Cardinal Roger Mahony Blogs L.A.'

Considering Cardinal Mahony's reign of terror in the Archdiocese of Los Angeles, the first major decision that Francis faces is the immediate removal of Mahony's hands from the purse strings, as a member of the Board of Trustees, of the powerful Papal Foundation.

He should then proceed to strip Mahony of his title as Cardinal – and send him packing to the South Pole (without a laptop) – close to Francis' "end of the world" neighborhood. But given Francis' record and the socialist company that he keeps, I will be surprised if he takes any action against Mahony.

Attend the Latin Mass (the only true Mass) and keep the heat level high. All of these modernists will eventually self-destruct.