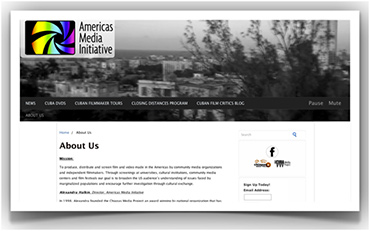 The Cuban government is paying for sex change operations, while the USCCB (U.S. Conference of Catholic Bishops) blames Cuban poverty and the abysmal state of socialized health care, on the symbolic U.S. embargo.

Meanwhile, a Cuban filmmaker is conducting a tour across America, to promote her film about a man who underwent a government-funded sex change operation in Cuba: Cuban director discusses new film in campus visit | The Daily.

And where does the other part of the funding for Americas Media Initiative come from?

Are American taxpayers actually paying for this Cuban woman to promote such a film in front of American college students?

Have they considered changing venues to the Venice Biennale? – which accepts this cinematographic genre. If they hurry, they may even get a space next to the Holy See's bizarre pavilion, where they can rub elbows with the Vatican's ultra-modernist Cardinal Gianfranco Ravasi. Ravasi will find "enlightenment" in just about anything.

Cuba's Communist government is laughing all the way to the bank, as it lines its pockets with tourism dollars pouring into Cuba from the U.S., as well as from the international community – which has maintained friendly relations with Castro, for decades.  The "cultural exchange" programs with Cuba are another source of revenue, which helps Castro's criminal government continue its relentless oppression inside the island prison.

Click on this link to read the facts about Cuba's government and how it is starving and persecuting the Cuban people, while it fills its coffers.

But the Catholic Church continues to "dialogue" with Cuba's Communist thugs – instead of condemning the hellish reality of the Cuban people, resulting from almost 54 years of communism and atheism.

A reality that includes government-funded operations for Castro's "Hombre Nuevo" (New Man) – who now wants to be a woman.