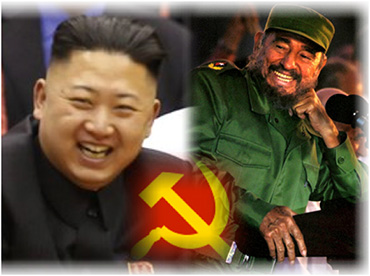 The bureaucrats at the UN Palace of Nations in Geneva must be trying to find creative ways to justify their cushy positions. Their latest cause célèbre comes in the form of an investigative inquiry, which culminated in an advisory letter aimed at sending Kim Jong-un to the International Criminal Court (ICC).

But will they do the same against Fidel Castro? – based on his 55-year history of Communist oppression, starvation, torture, imprisonment, executions, human trafficking – and every type of human violation ever known to mankind. I speak from a definitive position, based on experience. I was born and raised in Cuba under Castro's brutal regime.

The answer is no.

I have just received this article from Dr. Robert Zubrin, where he denounces and details Cuba's starvation diet, calling it "a crime against humanity." Dr. Zubrin is an aerospace scientist, and an internationally acclaimed authority on human space exploration. He is best known for his advocacy of manned exploration of Mars, through Mars Direct. Dr. Zubrin is also the author of books on energy independence, eugenics, population control and radical environmentalism.

In fact, Communist Cuba is a member of the UN's Human Rights Council.

Yes. You read that correctly.

On January 1, 2014 Cuba was elevated to the position of world judge on human rights!

This is like hiring a bank robber to guard a bank.

And you should care – because it affects your pocket.

How does the United Nations accomplish these "triumphs" in defense of human rights?

It's all done thanks to the millions of taxpayer dollars siphoned from the wallets of hardworking citizens all over the world, who reside in UN member nations that support the ongoing "human rights" farce at the Palace of Nations in Geneva.

It's also done through contributions maneuvered through NGO's and billionaires, who believe that they know what is best for you – because as far as they are concerned you are simply not smart enough to take care of your life, your family and your business on this planet.

So they have just the perfect socialist plan for you – which controls food consumption, population growth, private property, transportation – and every aspect of your life, so that everything can be "sustainable."

These elite socialist power brokers are working so hard to help you become a pawn of their socialist ideals – from the comfort of their mansions, private jets and luxuriously appointed boardrooms.

As you can see, the UN's socialist vision is not small. It's colossal.... it's GLOBAL!

__________
Cuba's murderous Communist government also enjoys great support from the European Union, which works hand-in-hand with the United Nations. The EU is trying to find ways to cozy up to Castro even more, as in the latest "dialogue" to expand trade, alongside educational and cultural exchange. As such, the EU wants to inspire Obama to do the same. How charming.

Yet, every single accusation against Kim Jong-un applies to Fidel Castro.

Oh, but these human rights advocates moving about the exuberant interior of their Palace of Nations in Geneva, are very altruistic. This is why the Human Rights Council wants you to know that the commissioners involved in these "inquiries" are not remunerated.

They must think we are fools.

Rest assured that someone is paying for some fine food to land on their Swiss plates, in addition to other perks.

You see, the United Nations is all about politics, privileges, back room deals – and advancing socialism, through Sustainable Development – the UN's massive initiative for regional-to-global governance.

Sustainable Development erodes the rights of citizens and the sovereignty of nations, under the hypocritical pretext of "social justice" and "environmental stewardship."

Observe what your local and state governments are doing with "sustainability" governance, policies and programs that impose higher taxes and fees.

__________
But let's get back to the UN's Human Rights Office (OHCHR) and its obscene multi-million dollar annual budget – which is never enough for these "fine" bureaucrats in Geneva.

The UN also wants you to know just how efficient and benevolent these human rights advocates truly are. Oh... yes. So, on their 80-page document titled Human Rights Appeal 2013, the UN lists a number of countries where it claims to be "defending" human rights, with the money it receives.

Cuba and Fidel Castro are not mentioned even once in this document, in spite of Castro's murderous record.

Let's look at some of the rights that the Human Rights Council claims to champion:

- Equality before the law


Cuba's Communist government violates all of the aforementioned rights – and much more.

The charges against Kim Jong-un apply to Fidel Castro

Upon reading the description of the charges brought against Kim Jong-un, I thought they were talking about Fidel Castro.

Michael Kirby, a former chief justice from Australia, is the head of the UN Commission of Inquiry into Kim Jong-un and North Korea. Kirby said that his group is trying to "galvanize action on the part of the international community" – by describing the crimes as "strikingly similar" to Nazi-era crimes.

Will Michael Kirby do the same against Fidel Castro in Cuba?

Let's take a look at some of the charges presented by the UN Commission of Inquiry against Kim Jong-un, and compare them with Fidel Castro's murderous 55-year-long Communist dictatorship in Cuba.

Number of officials potentially guilty of the worst crimes, would be "running into the hundreds:"

Citizens are subjected to torture and inhuman treatment, arbitrary detention, discrimination, their right to life is denied, they have no freedom of movement, they are victims of enforced disappearances, including in the form of abductions. Murder, rape, starvation and executions are carried out under government orders.

The gravity, scale and nature of these violations reveal a state that does not have any parallel in the contemporary world. Political scientists of the 20th century characterized this type of political organization as a totalitarian state: A state that does not content itself with ensuring the authoritarian rule of a small group of people, but seeks to dominate every aspect of its citizens' lives and terrorizes them from within.

These are wrongs committed against humanity, by the totalitarian regime.

Does the above statement apply to the following countries?

The Communist government uses food as "a means of control over the population" and "deliberate starvation" to punish political and ordinary prisoners:

By focusing only on the nuclear threat in North Korea, the Security Council is overlooking the crimes of the North Korean Communist ruler, Kim Jong-un.

By focusing only on the symbolic U.S. Embargo, the Security Council is overlooking the crimes of the Cuban Communist rulers, Fidel and Raúl Castro.


In addition, the investigative commission should ask:


Does the Communist government in question prohibit freedom of speech / freedom of the press?

Does the government engage in international illicit arms trade?

Are the following countries listed as State Sponsors of Terrorism, by the U.S. State Department?

(*-this means that Fidel Castro has one more strike against him, compared to Kim Jong-un).


Now that we have determined that these criminal charges apply to both Communist despots, how in the world can these United Nations officials justify their ongoing love affair with Castro's Communist regime?

Could it possibly be that Kim Jong-un is not geopolitically viable for a key role, like Castro's, in the United Nations advancement of global socialism – through Sustainable Development?

The answer is: YES

The unbridled hypocrisy of the United Nations is an insult to humanity.

The USCCB, Cuba and the Chong Chon Gang

+++
Please click HERE for copyright terms and conditions, as well as important instructions if you wish to quote an excerpt of this article.