They are just wrong about the date when they started "Cooking the Books Chicago-Style," now Obamacare will increase part-time underemployment.

This article was published a year ago in Canada Free Press, I have updated it in light of the current Obamacare fiasco. Prior to the last election, Jack Welch received a great deal of press and undeserved criticism regarding his now famous tweet regarding the bureau of labor statistics "conveniently" dropping the unemployment rate below 8% for the latest "Jobs Report." The Obama administration believes their own unemployment propaganda, just like the Benghazi, NSA spying, IRS targeting conservative's...ad infinitum... propaganda.

Out of curiosity I went to the bureau of Labor Statistics and downloaded two files: 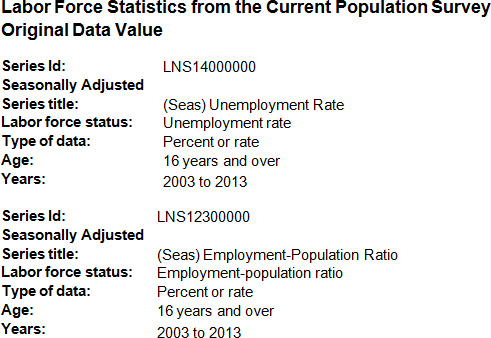 The former is the much ballyhooed number and the latter is a compilation of the people actually employed as a percentage of the total population. When I graphed the two independently, I could not see a good correlation so I decided to graph the two together on the same graph and while there was some correlation between the two up to mid-2009, there seemed to be a disconnect after May/June of 2009.

I then decided to sum the unemployment rate with the employment-population ratio and create a third trend line on the graph (BLUE ), logically concluding that the sum of the two should be a percentage of the population available for work. 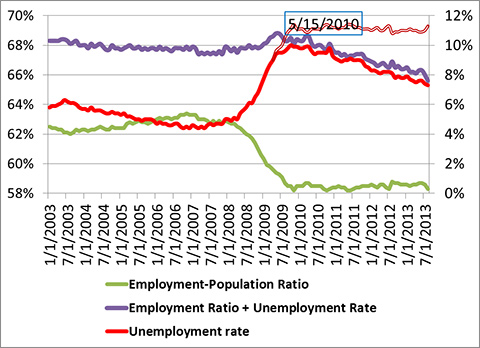 As I surmised the Employment-Population ratio and Unemployment rate mirror each other, at least until May 2009. From June 2009 onwards there appears to be a severe anomaly and the trend line for "Employment Ratio + Unemployment Rate" makes a dramatic reversal of direction. During training as a Petroleum Engineer, the importance of statistics and trends within empirical data was always stressed particularly in the text book we used Stanley, L. T., 1973. Practical statistics for petroleum engineers. Tulsa, Petroleum Publishing Company. Changes in the slopes of data points are of critical importance to the profession of Petroleum engineering in delineating oil and gas reservoirs, looking for drilling breaks (changes in rate of penetration or torque on bit) as the drill bits penetrated different rock strata or in doing drill stem tests to assess well and reservoir performance.

What happened in May/June of 2009 was not merely a change of slope of a statistical trend but rather a reversal of direction and suggests either some corruption of the dataset or some mathematical or statistical change in the manner of how the numbers were being tallied. Jack Welch and Forbes are correct about the Labor Numbers being "Cooked," they are just wrong about the date when they started "Cooking the Books Chicago-Style"; it was not September/October 2012 but rather May/June 2009.

Looking at the above graph, it appears that the rise in Unemployment Rate was artificially slowed as it careened towards 10% as if some unseen hand wanted to prevent it from exceeding 10% despite the fact that the Employment-Population ratio continued to plummet another 1.6% for another 6 months after that breakpoint and has remained at a near static condition from Nov/Dec 2009 to the present day! Was this unseen hand used to prevent the unemployment from reaching the double digits talked about in this AP video?

Since I do not know the actual "secret" change in calculation of the unemployment numbers that was implemented mid-2009 I formulated an assumption that the relationship that existed for the previous 12 months between Unemployment Rate and the Employment-Population ratio was a relatively accurate picture of the real unemployment rate. Based on this I extrapolated that relationship from May 2009 to the present day (see the double red line above); While there may be some inaccuracies in that assumption/extrapolation, it most assuredly is a more accurate picture of the current level of unemployment within the country since May 2009 than whatever it is the Bureau of Labor Statistics is touting. For those who would criticize my approach in any regards to the intent or methodology, I would counter with the following observation: "How can the employment situation here have improved over the past four years if the Employment-Population ratio is as flat-lined as a patient experiencing cardiac arrest."

Perhaps the most tragic aspect of the previous video is listening to President Obama starting at 0.25 talking about the "2.8 Million Americans who want full time employment have to settle for part time employment"; realizing the hypocrisy of Obamacare's definition of full time employment causing increasing numbers of people having their hours cut to below 30 Hours per week at the same time he is flogging amnesty for illegals which will further decrease wages, particularly in the black community. While some might say these are the untended consequences for a law touted by (to quote Trey Gowdy) "Mind-Numbingly Stupid" Nancy Pelosi "You have to pass the bill to find out what is in it"; it must be remembered that a 30 Hour Work week has been a Marxist-Socialist ideal for a long time. 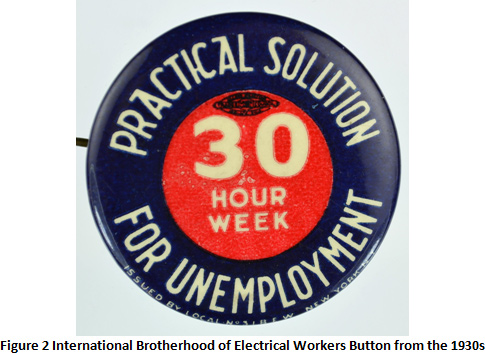