November 3, 2014
Beware the Ides of Tuesday! The election is upon us. Like the gup spewing from the exploding volcano in Hawaii creeping toward the town of Pahoa to ensnare it in boiling lava, the leftist political machine has slowly been snaking its way across America determined to cover and smother us with their fires-of-hell fumes. America is in the midst of the strangest most damaging political issues since her founding. 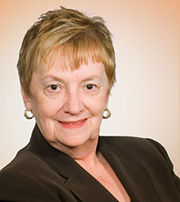 Ms. Trautman, a regular contributor to this column, was raised in a family owned entertainment enterprise. She worked at KDKA TV in Pittsburgh as a Production Coordinator, would later head a distribution company, representing Independent Film producers, became a top-notch Press Agent not only for films, but for traveling shows coming to the Pittsburgh area including The Tom Packs Circus when it appeared at Three Rivers Stadium.

She wrote and acted in a one woman presentation of LYDIA, the first woman entrepreneur. Plus, Ms. Trautman was and is the first female leader of the famed, Variety Club. This feisty redhead has a handle on everything going on in this perplexing world and a sense of humor to go with it. Here is her explanation of the art of politics:

While walking down the street one day a Corrupt Senator was tragically hit by a car and died.

His soul arrives in heaven and is met by St. Peter at the entrance.

"Welcome to heaven," says St. Peter. "Before you settle in, it seems there is a problem. We seldom see a high official around these parts, you see, so we're not sure what to do with you."

"No problem, just let me in," says the Senator.

"Well, I'd like to, but I have orders from the higher ups. What we'll do is have you spend one day in hell and one in heaven. Then you can choose where to spend eternity."

"Really?, I've made up my mind. I want to be in heaven," says the Senator.

And with that, St. Peter escorts him to the elevator and he goes down, down, down to hell.

The doors open and he finds himself in the middle of a green golf course. In the distance is a clubhouse and standing in front of it are all his friends and other politicians who had worked with him.

Everyone is very happy and in evening dress. They run to greet him, shake his hand, and reminisce about the good times they had while getting rich at the expense of the people. They play a friendly game of golf and then dine on lobster, caviar and the finest champagne.

Also present is the devil, who really is a very friendly guy who is having a good time dancing and telling jokes.

They are all having such a good time that before the Senator realizes it, it is time to go.

Everyone gives him a hearty farewell and waves while the elevator rises.

The elevator goes up, up, up and the door reopens in heaven where St. Peter is waiting for him, "Now it's time to visit heaven...

So, 24 hours passed with the Senator joining a group of contented souls moving from cloud to cloud, playing the harp and singing. They have a good time and, before he realizes it, the 24 hours have gone by and St. Peter returns.

"Well, then, you've spent a day in hell and another in heaven. Now choose your eternity."

The Senator reflects for a minute, then he answers: "Well, I would never have said it before, I mean heaven has been delightful, but I think I would be better off in hell."

So St. Peter escorts him to the elevator and he goes down, down, down to hell...

Now the doors of the elevator open and he's in the middle of a barren land covered with waste and garbage. He sees all his friends, dressed in rags, picking up the trash and putting it in black bags as more trash falls from above

The devil comes over to him and puts his arm around his shoulders.

"I don't understand," stammers the Senator. "Yesterday I was here and there was a golf course and clubhouse, and we ate lobster and caviar, drank champagne, and danced and had a great time. Now there's just a wasteland full of garbage and my friends look miserable. What happened?"

The devil smiles at him and says,

"Yesterday we were campaigning, Today, you voted.."

And THAT, ladies and gentlemen, is politics. Vote wisely this Tuesday,November 4th. Your vote is your VOICE. Even though most of these votes will be hijacked by Democrat Socialists with thousands of fraudulent head counts and rigged voting machines, they will still hear your VOICE giving them push-back as they blatantly declare their take-over of America. This will make them pause to think. Our numbers must be seen even though the votes might not go through. This is how our voices gain strength. And that is what they fear most.