November 8, 2010
The time for reviving the House Committee on Internal Security is long past.

In 1975, the post-Watergate Congress abolished the panel that had functioned well for 37 years. At its 1938 inception, the committee's first chairman — Rep. Martin Dies, Texas Democrat — set out to expose the subversive influences that were spreading their propaganda as war clouds hung over Europe. 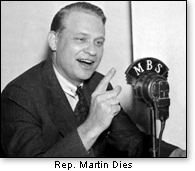 Under its original name — the House Committee on Un-American Activities (HCUA) — Dies held hearings that brought to light the internal threat from enemy agents. As long as his panel investigated Nazis — the Silver Shirts, the German-American Bund, et al — the Texan drew lavish praise from President and Mrs. Roosevelt and their media echoes.

But when the lawmakers started holding hearings on Communists, the liberal establishment went berserk. Then, it was — oops! time to shut these hearings down. Dies did not retreat. The world-conquering goals of brown socialism (Hitler) and red socialism (Stalin) deserved equally unfavorable attention.

In the ensuing years, the committee made headway probing Communism in Hollywood, Communist fronts in industry and labor, and Communists in government (which led to the outing of Alger Hiss).

The dupes (and dupers)

Of course, not everyone who criticized the committee was a Communist. But every Communist had a stake in abolishing the committee.

And herein lies the Soviet strategy that managed to spread the Communist Party line far beyond the confines of the tiny Communist Party USA — i.e., the role of the dupe.

Webster's dictionary defines a "dupe" as "a person easily deceived or fooled." That was a basic ingredient of Communist success in spreading its propaganda worldwide: getting non-communists quite unknowingly to do their work for them.

Paul Kengor, Ph.D., has just written a fascinating book entitled Dupes: How America's Adversaries Have Manipulated Progressives for a Century.

Dr. Kengor, a best-selling author and professor of political science at Grove City College in Pennsylvania, names some of the leading "dupes" who — however unwittingly — have served the Communist cause over the last 100 years.

Among the dupes — and the dupers — on his partial list are Arthur Miller, the playwright known for his anti-McCarthy work The Crucible; Benjamin Spock, the baby doctor hero of the sixties counter-culture; Upton Sinclair, muckraker; H.G. Wells, English author; John Dewey, the father of modern education; George Bernard Shaw, Irish playwright and founder of the London School of Economics; Lillian Hellman, hard-boiled (and hateful) Stalinist playwright; Howard Zinn, Communist Party member whose hate-America distortions of history are used in schools all across America; Walter Cronkite, "most trusted man in America"; and Helen Thomas, disgraced former "dean" of the White House press corps.

The late Senator Edward (Teddy) Kennedy was one of the most egregious "dupes" of the 20th century. He went so far as to coach the Soviets as to how to undermine — not just one, but two presidents, as revealed in a KGB memo. That story first appeared in the London times in 1992. When Kengor picked it up and verified it in his 2006 book The Crusader, "American journalists flatly refused to cover the story," he reports in Dupes.

Dr. Kengor presents ample evidence that Frank Marshall Davis — the male role model for a young Barack Obama — was a member of the Communist Party USA — clearly one of the dupers.

Professor Kengor's work hit the shelves not long after The Manchurian President was released. That book, subtitled Barack Obama's Ties to Communists, Socialists and Other Anti-American Extremists, is the result of exhaustive research by Aaron Klein (investigative journalist) and Brenda J. Elliott (historian).

The Manchurian President reveals President Obama's ties to an anti-American fringe nexus instrumental in building his political career, some of them helping draft White House policy — including that monstrosity nicknamed "Obamacare."

We learn of Obama's deep association with the Nation of Islam and the president's ties with Bill Ayers and Bernadine Dohrn, the husband & wife bomb-throwing (literally) team. These two are now "respected" academics.

If this incoming Congress — elected by a public fed up with seeing traditional values trashed by a Far Left willing to aid and abet Islamic terrorists — does in fact revive the House Committee on Internal Security, its chief investigator would do well to consult the writings and files of Herbert Romerstein — retired intelligence professional who is a walking encyclopedia on America's enemies. He wrote a monograph From Henry Wallace to William Ayers — the Communist and Progressive Movements. 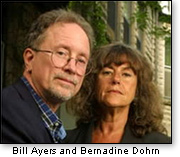 For our younger readers, Henry Wallace was a super dupe who ran for president in 1948 on the ticket of the Communist-organized Progressive Party.

The second name on Romerstein's paper — William Ayers — is our focus here. As reported in this space previously, William Ayers and Bernadine Dohrn hosted Barack Obama's first campaign fundraiser in their home when the future president launched his first run for the Illinois State Senate.

Ayers and Dohrn had been deeply involved with the Weather Underground. Romerstein traces the history of that group back to the days when the revelation of Stalin's crimes, as admitted by his successor Nikita Khrushchev, caused many members to drift away from the Communist Party. Some became Maoists or Trotskyites. In the sixties, many small "c" communists gravitated to the Students for a Democratic Society (SDS).

In the seventies and eighties, Romerstein tells us, "a number of groups of SDS members...were part of the Weather Underground." He goes on to relate that The Weather Underground "in 1974, issued a lengthy statement called Prairie Fire: the Politics of Anti-Imperialism," signed by four people, two of whom were "Billy Ayers and Bernadine Dohrn."

The tract touts its contents as having been written by communist-minded revolutionaries "to all sisters and brothers who are engaged in armed struggle against the enemy."

Just so no one misses the point, it further explained, "We are a guerilla organization. We are communist women and men, underground in the United States....We are deeply affected by historic events of our time in the struggle against imperialism." 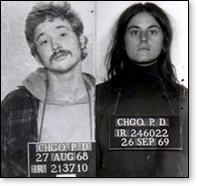 Previously, this column has dealt at length with a 40-year-old case wherein the pro-communist Weather Underground (through the bomb-making handiwork of Dohrn) placed a bomb at a San Francisco police station. The explosion killed one officer and seriously injured several others. (See "Obama's terrorist pals get away with murder? Literally?," March 23, 2009.)

Ayers and Dohrn got off on a technicality — not because they were innocent. They were, as Ayers himself exulted, "Guilty as hell, and free as a bird."

The police union is still pursuing justice, on the reasonable expectation that these animals have no business roaming the streets, let alone being in a position to start a politician on his way to the White House.

Again, bring back the committee

If you are represented by one of the new Republicans elected to the incoming Congress to be sworn in come January, please urge him or her to push for bringing back the House Committee on Internal Security to probe the "guerillas" who, by the way, are only too happy to collaborate with radical Islamists who want to kill as many American as possible. Exposing the Far Left/terrorist link would be the primary reason for reviving the House panel.